So. Let’s talk about Splendor. If you’ve ever imagined yourself as a gem merchant trying to establish a trade network during what I would approximate as the Renaissance, this is probably the game for you. Let’s be real, though: who hasn’t? Unlike the past few microgames I’ve talked about, Splendor is a short-but-weightier (comparatively) game that’s what we would typically call an “engine-building” game for reasons I will explain later. In it, you vie to impress nobles visiting your gem … emporium? with a show of your fabulous wealth. You accrue wealth by taking gems and using those gems to build up your network. It’s every small child’s dream. Let’s get started.

This game doesn’t take much time to set up (you’ll notice that I tend to get games like that, with some exceptions). In the box are three decks of cards, a handful of tiles, and six sets of chips. Let’s discuss them in the exact opposite order I listed them, starting with:

Now, put the top four cards of each deck in a row next to their corresponding deck. These are the available cards that can be bought. Your play area should look like this, if you’re playing a two-player game:

Splendor is pretty simple to play. On your turn, you can do exactly one of X actions:

This sapphire costs two sapphires, two emeralds, and three rubies to play, but when you play it it produces one sapphire and gives you 1 point.

Here’s the cool part: Producing a gem PERMANENTLY reduces the cost of all cards by one gem of that color, for you. This eventually allows you to get cards for reduced gem counts, even free! This is also how you attract nobles; they only show up for cards in front of you, and you get them immediately rather than having to use an action to buy them. That’s a pretty great way to get points.

And that’s it! That’s how you play. Once someone gets to 15 points, you finish that round (so everyone gets an equal number of turns), then the player with the most points wins. It’s similar to Dragon Slayer‘s rules for ending the game.

This is a pretty strategy-heavy game despite being a tiny bit random, so I’ll try to talk a bit about a few best practices for the game.

I kind of like the meh’s. I think I’ll keep them. 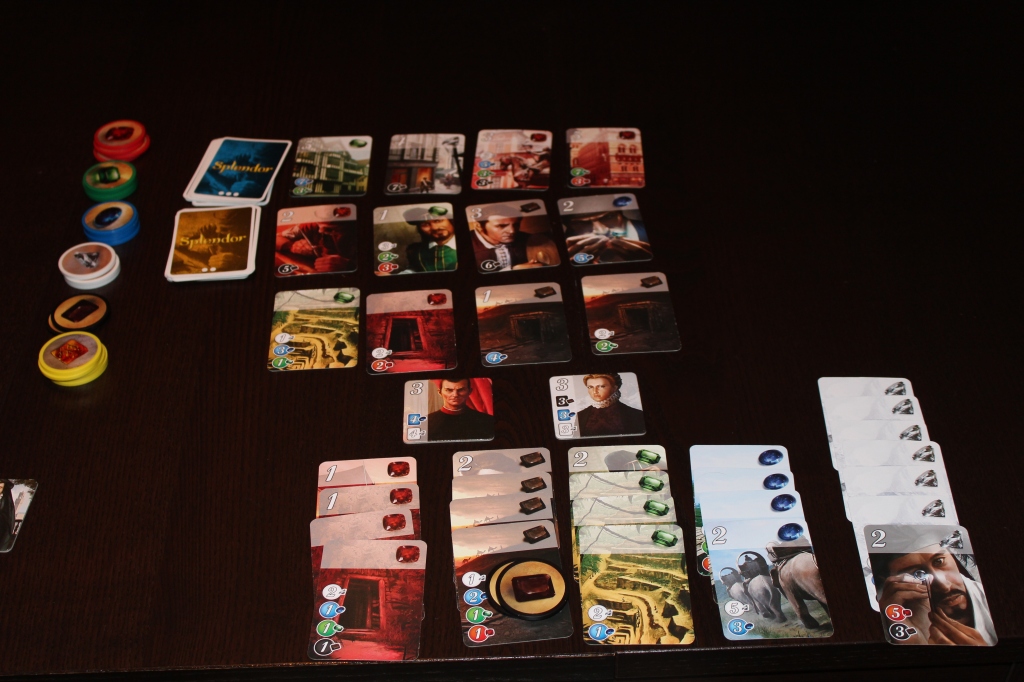 I’m conflicted on Splendor. On one hand, I think it’s an amazing game and everyone should have it in their library. On the other, I don’t play it nearly as much as my love for it would suggest. While I’d like to say it’s because I don’t have as much of a taste for serious strategy games, I actually think it’s because I was on a bit of a hot streak and now I’m not inclined to play again and lose. Welp.

In all seriousness, though, Splendor is an excellent game for a small group — if you’re looking for a game that will occasionally cause you to rack your brain thinking of avenues for success. I think it’s definitely a gem (heh) (heh) (heh) for your collection, and if you’re thinking about it, get it. Like I said, I’d love to see an expansion, and it seems just popular enough to be a possibility. While more nobles would be nice, it’d be weird if they added like, an extra level of cards. Maybe have some sort of events or something? Who knows.