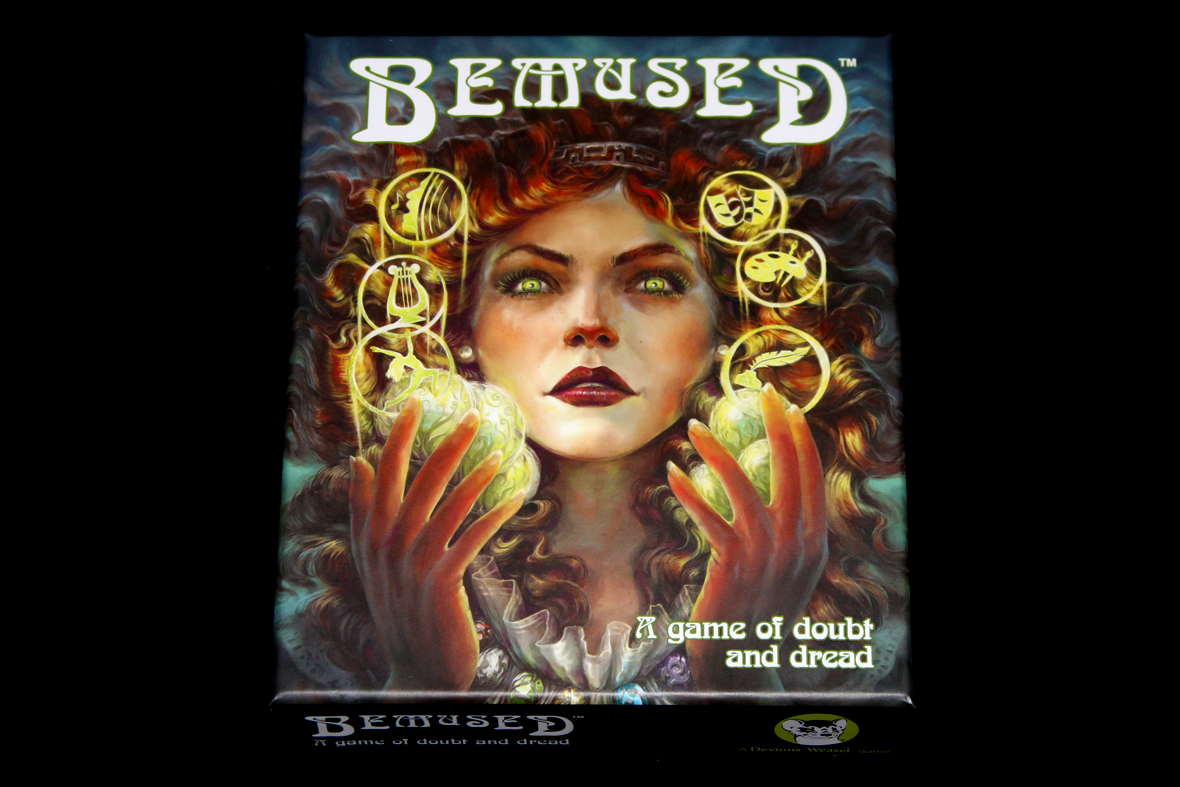 Full disclosure: A preview copy of Bemused was provided by Devious Weasel Games.

So, art is pretty neat, especially as someone who works in a technical career (as many people in my field are a bit more excited about logic than art, which makes me sad). This means that I try to seek out games that are about art or music (like DropMix) or that sort of thing rather than technology or science (if possible, though I’ll still play games that involve the latter quite happily, like Factory Funner). Naturally, this means Bemused caught my eye, so here we go.

In Bemused, you play as one of several muses who have been trying to make their chosen virtuosos into the greatest artist of their day. Unfortunately, they’ve all been pretty successful, so all of their virtuosos are basically the top of their field, but none can be called the greatest artist. As a result, they decide to take the more nefarious route of driving their opponent’s virtuosos toward insanity or death, as one does. Will your virtuoso be the last one standing?

So the first thing to do is to pick virtuosos and put them in front of you, colorful-side up. You can either choose the one you want or randomly deal them to each player:

Once you’ve done that, you should prep the Doubts deck (Well of Doubt) by only shuffling together doubts for those virtuosos:

Deal each player 4, face-down. That plus one of the Dread cards will form their starting hand:

Put the Dread cards face-up in the center in a pile (the Well of Dread). Additionally, give each player a Gemina, face-down. The player may look at it but should keep it hidden. This represents a virtuoso that a player has some kind of affinity / feeling toward:

As with the Doubts, only use Geminas for virtuosos that are in play. Finally, deal each player a Secret, face-down. The player may look at it but should keep it hidden. 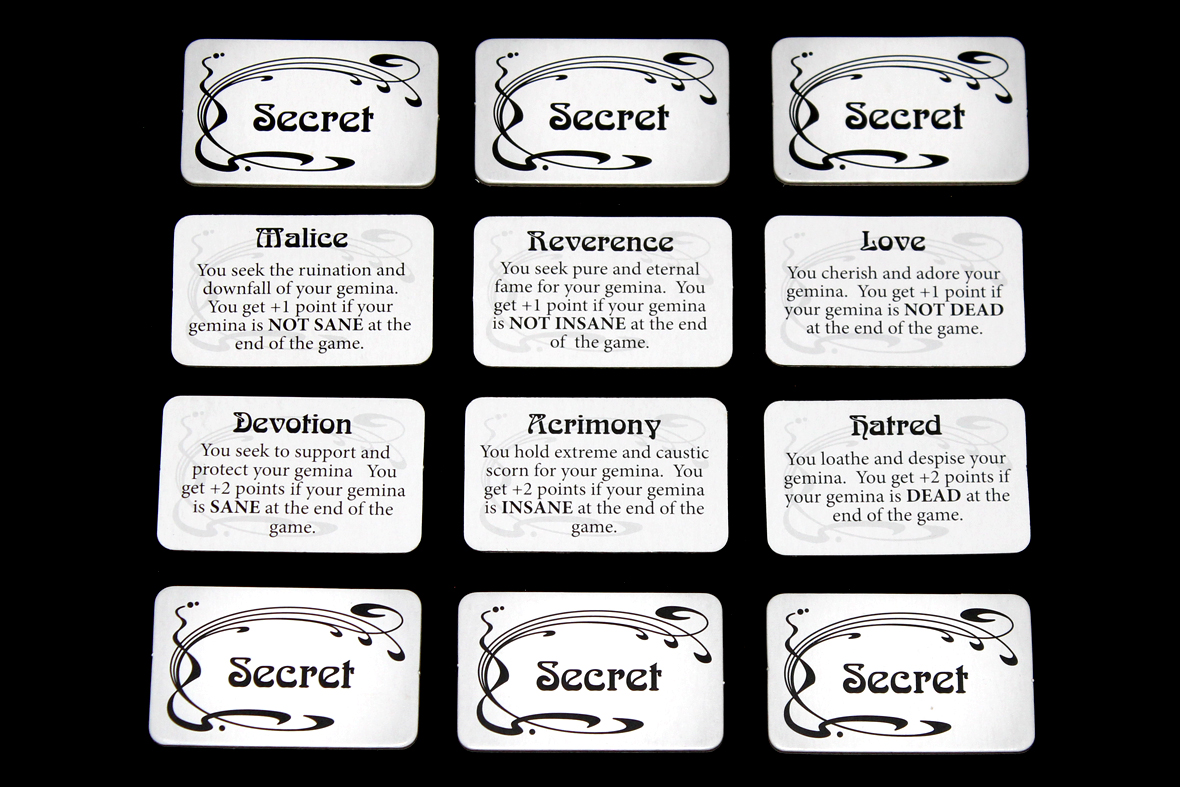 Once you’ve done all that, choose a player to go first and you’re pretty much ready to start! 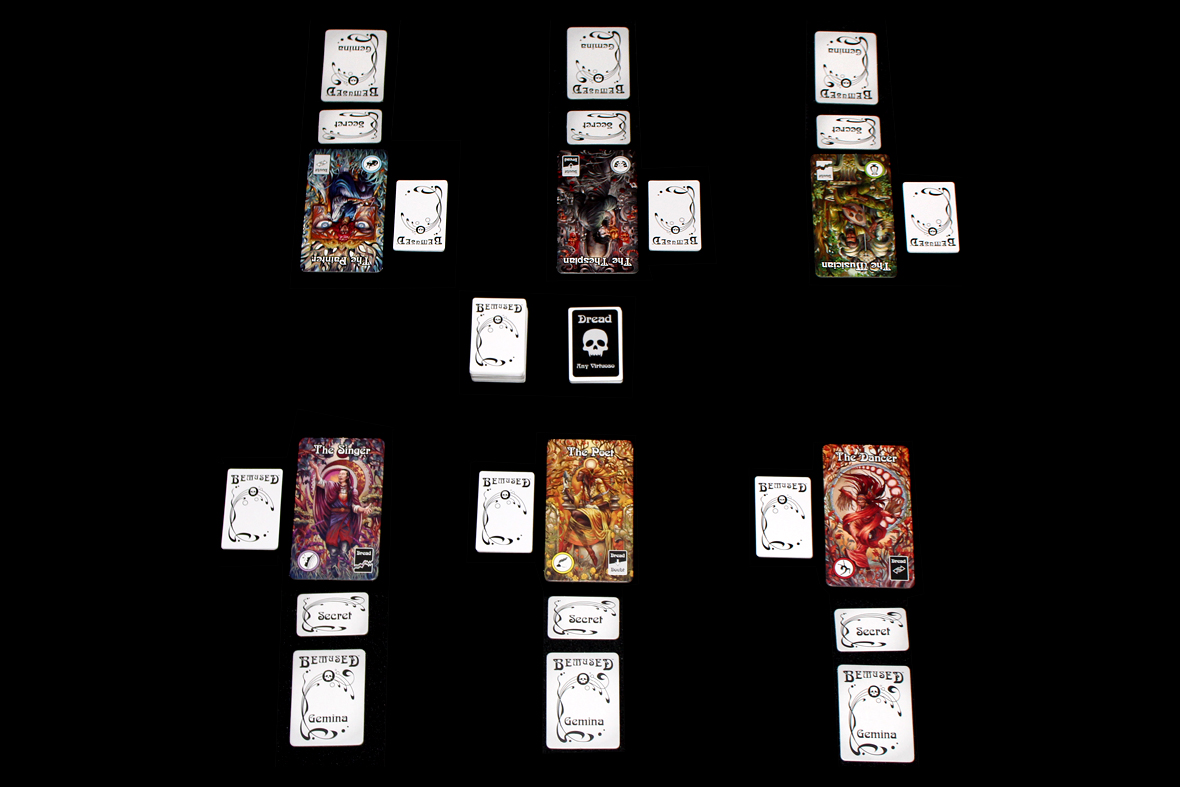 A game of Bemused is played as a series of turns in which you try to drive your opponents to despair via doubts or dreads. So cheery! Either way, you will find your character in three states over the course of the game: Sane, Insane, or, uh, Fantasma: 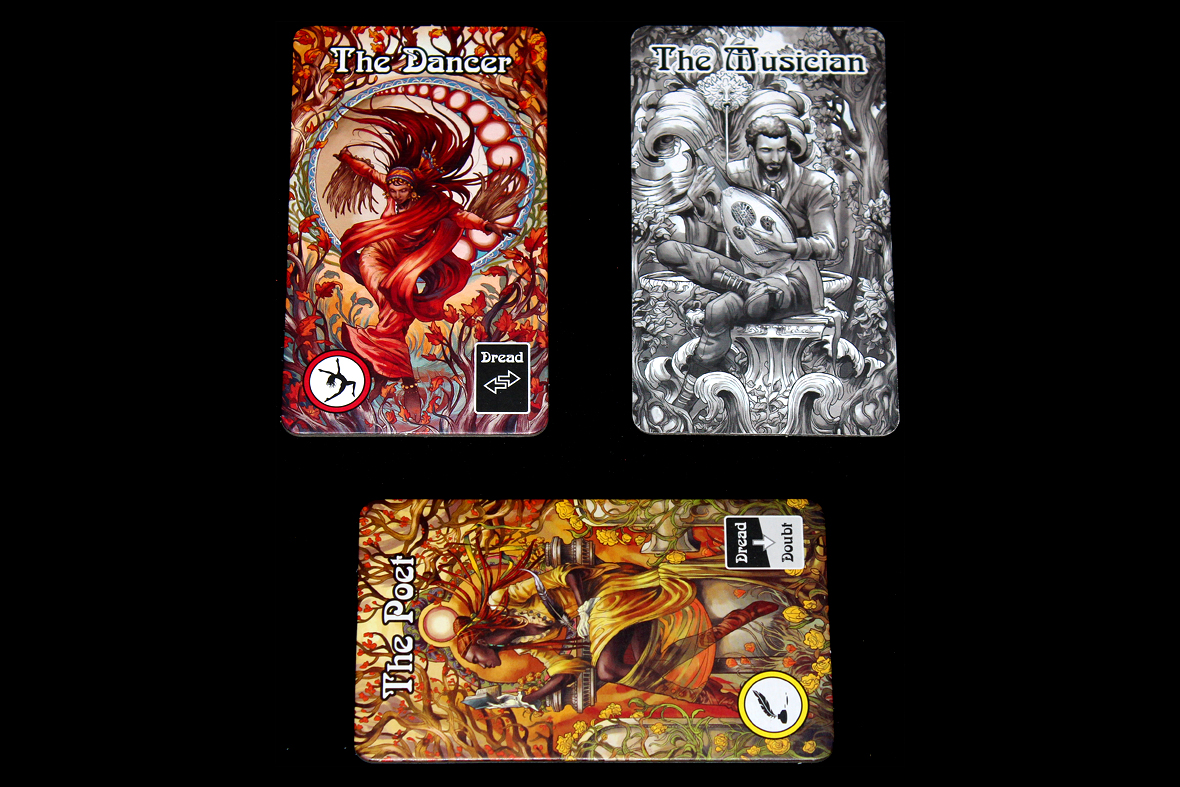 That’s a fancy word for dead. Each of those states are caused by having Doubt or Dread cards placed on (or removed from) your Virtuoso, and each determines what actions you may take on your turn. I’ll describe the various turns … in turn. You can also move between states (sometimes), as described below.

That said, if you ever end up with 5 cards on your Virtuoso and 0, 1, or 2 of them (< 3) are Dreads, you go Insane from all the Doubt! Turn your card horizontally and use the Insane Turn to determine your actions, depending on when it happens. Also note that if you go insane, you flip your Gemina. If it’s face-up, it turns face-down. If it’s face-down, that counts as revealing it! However, instead of you taking the Dread, your Gemina takes the Dread! This can set off a chain reaction, as if your Gemina is already Insane, you replace one of their Doubts with this Dread.

If you, by some Good Fortune, end up having cards removed from your Virtuoso, you can have your sanity restored. Return your Virtuoso to its vertical orientation and play using the Sane Turn rules.

If you end up with 5 cards on your Virtuoso and 3 or more of them are Dreads, you get overwhelmed and just die. Flip your card over to the greyscale side; you’re now a Fantasma! You do not reveal your Gemina, in this case. You’ll use the Fantasma Turn Guide from now on. You cannot return to Sanity or Insanity once you are a Fantasma; you’re just dead. Also, discard your hand, placing Doubts in the Well of Doubt discard pile and Dreads into the Well of Dread.

So, if you start your turn and you’re sane, your turn proceeds as follows:

Additionally, at any time during your turn, you may Reveal your Gemina. If you do, you flip it face-up and take a Dread card from the Well of Dread and add it to your Virtuoso. However, you can now use their ability as well as yours. If you are your own Gemina, then you may instead draw three cards, every turn. Not bad!

So, if you start your turn and you’re insane, your turn proceeds as follows:

So, if you start your turn and you’re a spooky ghost, your turn proceeds as follows:

The game continues until one or fewer players are left sane. This could mean that all players are Insane or Fantasmas, which happens, sometimes. Players will then score:

Now, every player reveals their Secret and scores that, as well, if they can. The player with the most points wins!

I think the game changes a fair bit based on player count, as there are both more turns that happen in games with more players between your turn and also it’s a bit easier to get players to gang up on another player if there are more of them. This means you need to be really careful in 6-player games, as a player can be killed / driven insane without you ever taking action against them pretty easily, and it’ll require a bit more work in 4-player games. That said, the hands will be a bit more diluted since there are more Doubt cards in play. I don’t have a strong preference, but I probably prefer the 4- or 5-player versions, as I feel like I have a bit more control over the outcome.

If you have nobody to mess with, mess with the player on your right. It takes the longest for it to be their turn and players might pile on if they’re looking particularly weak. 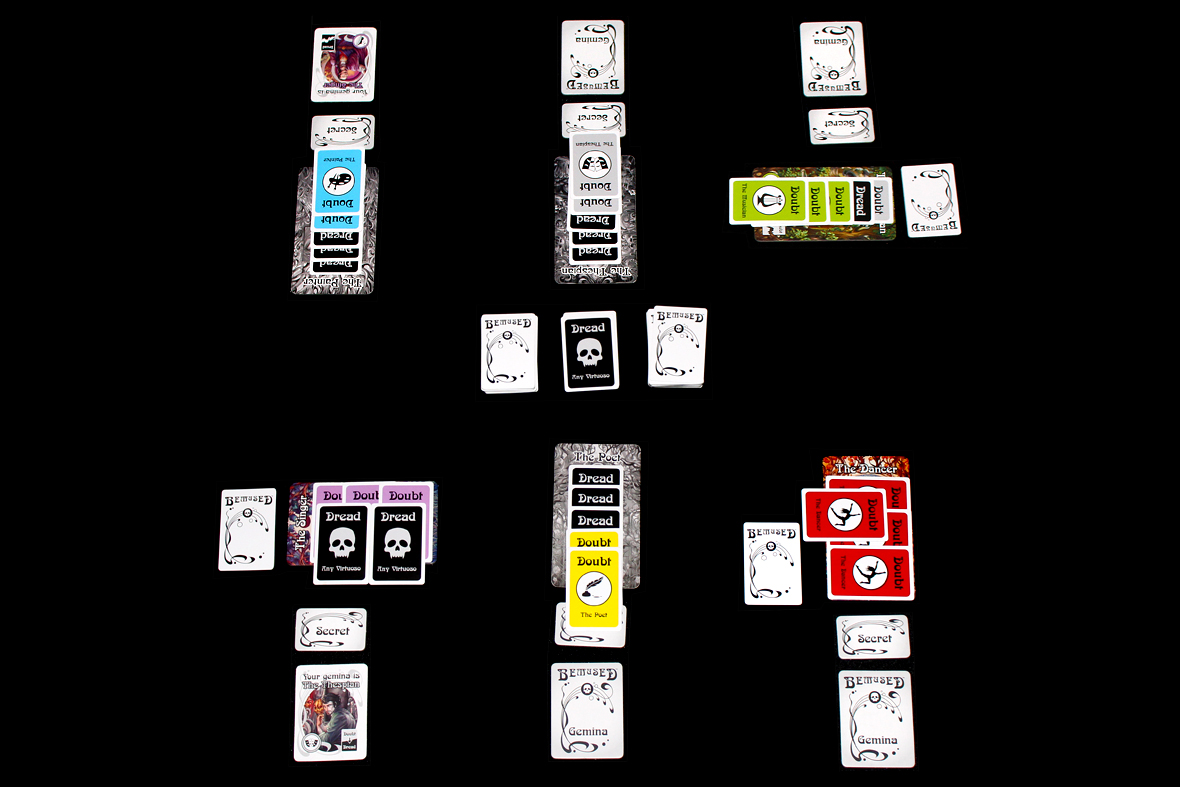 Overall, Bemused is pretty fun. I think I’m probably not the target gamer for this game, but there are still reasons why I would enjoy it. For one, as mentioned, the art is incredible, and I’d love to see more games with this art. I also find the structure of the game interesting, as the different states affecting gameplay really make for a varied experience depending on where you are in the game. I’d like to see similar structures applied to games that are a little less take-that (maybe an exploration game), as I feel like that might appeal to me and my game group, but this isn’t a bad game to break out for Halloween (spooky ghosts!) alongside, say, Don’t Mess with Cthulhu. I find five players is often a tough count to seat (though Magic Maze has fixed that, somewhat, for me), so it’s nice to have games that stick to that band. If this sounds up your alley, I’d recommend checking it out! Just keep in mind your group and how they’d react to a game like this. It’s definitely interesting, and I look forward to seeing more games with this type of system in the future!