This is gonna be a weird writeup. As I’ve done in the past when I did some app reviews, I occasionally appreciate the blending of tabletop gaming and electronics (and there are many apps that are very good, right now, such as Burgle Bros., Patchwork, Ticket to Ride, and more). DropMix isn’t quite like that — it’s more like a card game supported by a music game system. But, of course, it’s coming from the team behind Rock Band, so it’s going to be at least interesting. But how’s it play? Let’s find out!

Setup is pretty straightforward, to be honest. You’ll want to organize cards into “Playlists” based off of the icon in their bottom-right corner:

The base game comes with 4 playlists, but you can buy more for I think $15 each. there are also Discover packs, but I don’t know anything about them at the moment. I’ll update as I get more information.

Now, set out the DropMix Board:

You’re going to be playing most of your game on this. It takes 4 AA batteries, so make sure you have some of those before you start. There are very few things less satisfying than getting your sweet new game, opening it up, and then having to go to the store because you haven’t bought batteries in like, 10 years. Thankfully, I keep rechargeable batteries around (ironically, so I can play Rock Band), so this is more a cautionary tale than a sob story.

Regardless, you’ll also want to download the DropMix App from Google Play or the Apple Store. You’ll need to connect a phone or tablet to the DropMix Board via Bluetooth, so open the DropMix app and then hit the DropMix button to connect. If you can’t connect, follow the instructions in the app.

Once you’ve done that, you’re almost ready to play. There are three modes — Freestyle, Clash, and Party. I’ll cover each in Gameplay, but the major difference is that Freestyle isn’t really a game, per se, and Clash only supports 1v1 and 2v2.

So, for Clash and Party:

There are three modes; I’ll explain each in turn. The major thing to note is that each card has a color:

And each of those colors appears on one or more spaces on the board:

So you can put those cards on those spaces to start playing that part of the song. That’s pretty neat. There are also some special cards:

These cards are wild, and if you play them they essentially “shift” the song to match their tempo and key. It’s pretty cool.

Last, there are Effect Cards: 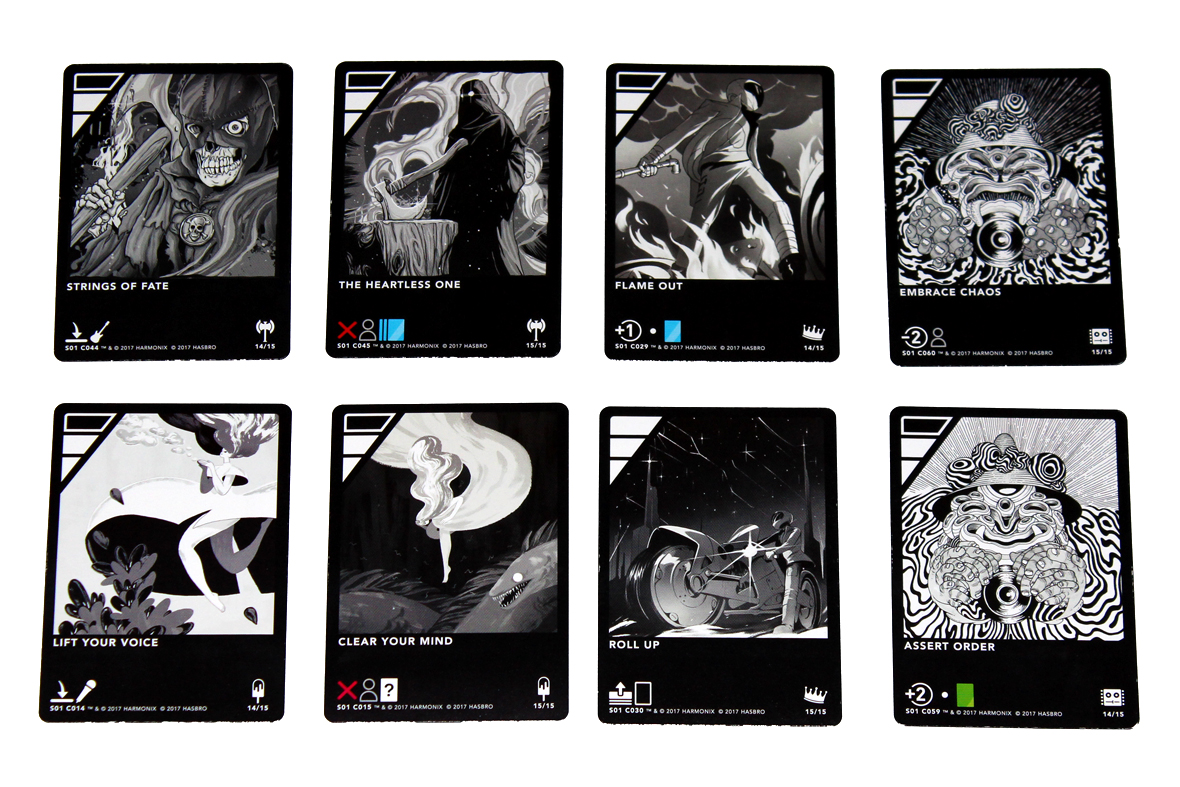 These only have an effect during Clash Mode, but they may cause a variety of things to happen. Otherwise they just make neat noises.

As I mentioned previously, this isn’t really a game so much as it is a fun way to make background noise. When you do that, you just put cards on spaces and make mixes. It’ll let you save mixes to the app by tapping in the top-right corner, and you can tap the bottom of the screen to manually adjust the BPM / key yourself. It’s a fun way to let people contribute to background music at a party or something, which is pretty cool.

One thing worth noting is that the instrument restriction (placing cards on their matching color spaces) does not apply, here, so you can play whatever card anywhere you want. Wanna mash up Bring Me to Life and Call Me Maybe’s vocals into one track? Do it.

Wanna go head-to-head against another player or team? Well, you can do that, here. You’ll play cards to try to get up to 21 points, with the first player / team to score 21 as the winner.

You’ll start with 5 cards in hand, and you’ll be able to perform two of either of the following actions each turn:

Play continues until one player scores 21!

This is the crowd-pleaser, a racing game to score points by answering the demands of the crowd!

For this one, everyone plays cooperatively in an attempt to satisfy demands made by the audience. The app will tell you how many cards to draw, and then be ready! You might get asked for things like:

Whenever you do, you score points based on how quickly you completed the request. But be careful! If you do the wrong thing you earn a Party Foul and lose 1000 points! You’ve gotta be quick but also, precise. Sometimes you’ll get asked for two things simultaneously, and you should try to play a card that fulfills both criteria. If you can’t, well, you can always play two different cards. Just remember that, like Clash Mode, you must play cards of at least the same volume as the card already on top of the stack. You also have to obey the color restrictions of the spaces.

When you hit the DropMix button, the Equalizer spins again and, like Clash Mode, removes any cards matching the volume level of the space it lands on. Unlike Clash Mode, this is generally good for you as it gives you more spaces to play on.

The game ends after four rounds — do your best to play well and get a high score!

I wouldn’t say there are many differences in player count, per se — Clash Mode plays about the same, just with a bit of card spread between two-player teams rather than 1, so you have a better chance of having “better” cards in hand.

At higher player counts I worry Party Mode will become a bit unwieldy — but that’s a management problem. Just have players call when they’ve got cards to play for a specific request and let people kinda self-manage. It’s a fun, fast, cooperative game, anyways.

Overall, this is a weird game for this blog, honestly. I’m not really reviewing Clash Mode or Party Mode as games as much as I am thinking about them in terms of experience. In this case, the gimmick is fundamentally necessary to make the game worth playing, right? If you were to just present me with Clash Mode or Party Mode as games, then they’d be average to fine. They’re pretty-straightforward trump games where you’re trying to always play upwards. That said, the experience of having that card activate a bassline from a song you like or add in an unmistakeable horn or shout the chorus to a beloved song fundamentally changes the way you experience the game. You’ll pause for a bit to talk about how cool that was or how this mix shouldn’t work but it totally does, and that’s worthwhile to me. Honestly, it’s a hell of a good time just sitting by myself, even, and adding cards onto the board as my mood changes. As a result, it’s hard to quantify where this game sits on the scale, but if you’re looking for something that’s going to turn heads at parties or give you a new way to think about how to interact with a card game, I think DropMix is a very interesting vision of an app-infused future, not entirely unlike Apocrypha or Mansions of Madness. If this is the direction games are headed, sure, I’d love for them to be cheaper, but I’d call this one expensive, not overpriced.