So, uh, I’m going to try and review a dexterity game, and you’re going to have to work with me. I might try my best to either post videos of actions being taken where I can’t use pictures, or I’m just gonna try and wing it, but I’m going to do something.

Ice Cool, then. To immerse yourself fully in this world, you’re a penguin currently attending a high school (get it?) where you figure you might as well sneak out of class to try and get some fish (ostensibly to eat, I suppose). Unbeknownst to you, your truancy has drawn the ire of the hall monitor, who is going to try and chase you down to take your ID and get you in trouble. Will you be able to slide away from the hall monitor?

So, the game is actually super interesting because the game box is part of the game as well:

So set those out and find the beigey fish clips:

Put the boxes together by clipping the beigey fish clips on spots that look like this:

Giving you the completed school. Cool! That was a lot of pictures without much text. You’ll notice that you have three things for each penguin: a picture card, an ID card, and a token. Take those out, and they look like this:

Yeah, this was not an easy photo to edit.

Note that, to my great delight, the ID cards are double-sided, so choose whichever of the two penguins you feel best expresses your identity and preferences. Me personally, I’m the blue penguin with the bow tie. Classy, yet fun. You’ll also notice some fish cards:

Shuffle those up and set them in a pile. Choose a player to be the first “catcher” (I’ll call it the Hall Monitor, but I think the rules call it something else) and have the player immediately to their left place their penguin on the yellow circle. Also, have every penguin except for the Hall Monitor place the fish tokens of their color on the three fish spaces between doorways on the board. If you’re all ready to start, your area should look like this:

Well, on your turn, you get exactly one move. You can use that move to sort-of-slap-or-push your penguin:

You can use that move to flick your penguin:

Or, if you’re doing a particularly impressive job, you can use that move to jump your penguin, trying to launch them over a wall:

Please note that if you land out of bounds, you go back to the point you jumped the penguin from. This might put you at high risk! If you ever completely slide through a door with your fish token above it, you can remove that fish token and immediately draw a fish card. Note that if you jump over the door, you do not get your fish card. Slide through, not over. Now, while you normally keep those fish cards private, there’s one circumstance in which you don’t want to do so:

If you have two 1 cards, you can reveal them both and immediately take another turn at the end of your first one. If you happen to have another set of two 1 cards, you can take another turn at the end of that one, and so forth. There’s no limit! Once the cards are used, they stay in your score pile, they’re just visible to all players at that point. Really, it’s just to make sure you don’t re-use them, I think. Play continues until a player has collected all of their fish tokens. Though there’s another way the round can end.

That said, there are a few caveats to gameplay:

Check out that red line. See how the penguin is between it and the wall? Well, when that happens, you must move your penguin to the red line at the start of your next turn. It’s both to make it easier to flick and a tiny bit harder to get through doorways, I imagine. Or at least to make some angles more difficult. 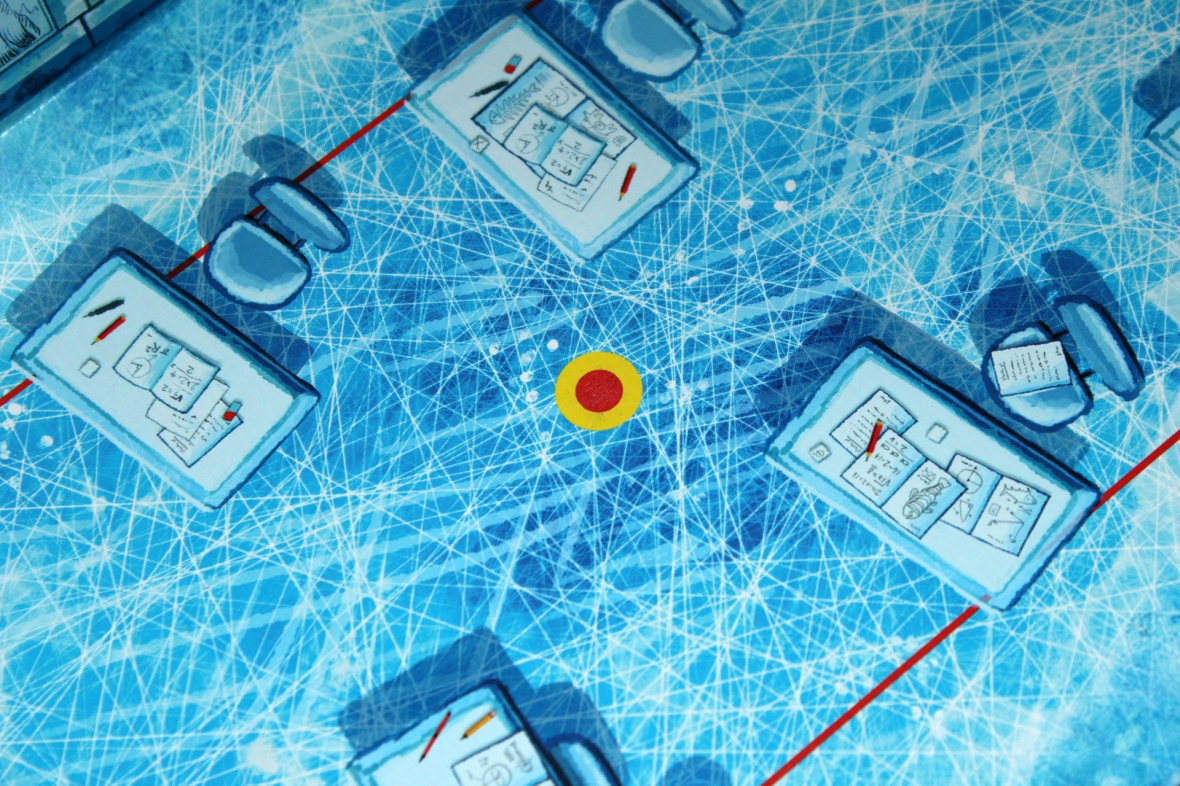 See this yellow circle? This is where you start. You cannot finish your turn on the yellow circle, so even if you happen to jump out of the school, you’ll get another flick for free. Maybe don’t spend the entire game jumping out of the school, as that will irritate your co-players, but it might be worth going big on your first turn? Who knows.

So the major difference is that with two players, you actually play four complete rounds of Ice Cool, in which each player gets to be the Hall Monitor twice. There’s also some interesting change to gameplay to try and make the rounds a bit longer:

Other than that, there’s no real difference. In three- and four-player games you have some personal benefit that the Hall Monitor might not go after you specifically, but there’s also a bit more entropy because you have to deal with other people ending up in your way or blocking things that you need to go through, which can be frustrating.

It’s hard to write a strategy article for a dexterity game, because most of it is “slap the penguin and hope for the best” (which, out of context, is probably also a good title for my memoirs). That said, there are a few things that you can keep in mind to potentially make your plays go a bit better for you:

As for specific flick techniques and such, you’re on your own.

Overall, I’d go so far as to say that Ice Cool is one of my current favorite games (and hopefully that’ll be true for a while). I loved it when I got the chance to play it at Gen Con, I basically bothered people until it released to try and buy it (and bought it the first chance I got), and I’ve been playing it pretty much weekly-or-so ever since. I think it’s a great game for all ages (except anyone who would try to eat the penguin pieces, so, at your own risk, I guess?) and, most importantly, something new and refreshing. I wouldn’t come up with a game like Ice Cool if I were designing a game, and I think that’s an amazing thing about it. It’s progressive for the hobby without taking itself too seriously (I mean, after all, it is a dexterity game) and it’s a game I think everyone in the hobby should at least try (though I’d definitely recommend it for any collection).