Full disclosure: A preview copy of Streets of Steel was provided by Other Stuff Games. Some art, gameplay, or other aspects of the game may change between this preview and the fulfillment of the Kickstarter, should it fund, as this is a preview of a currently unreleased game. Also, while I don’t charge for Kickstarter previews, the publisher was charged a rush fee due to the tight timeline they needed the review completed in.

As promised, there’s always more Kickstarters in the banana stand. To that end, I respectfully submit for consideration an additional two Kickstarter previews, this week. Y’all have been really great, so allow me to throw on another review of an already-published game, too. Please enjoy.

Let’s talk about Streets of Steel, an 80’s-themed retro beat-’em-up sidescroller wowee that’s a lot of words. Anyways, you used to live in a great town, but now it’s become … not-so-good. There’s punks and people with flamethrowers and mutant kangaroos and also PTA attendance isn’t so great. You’ve decided to fix up the town the only way you can: punching and kicking anything that so much as looks at you the wrong way, and occasionally wading into toxic sludge to find some food and eat it. All decent life choices. Will you be able to clean up this town? Or is your luck (and your supply of quarters) about to run out?

Each will have minis, yes, but also, pixellated standees! Really help you get into the “I’m playing an 80s-themed arcade game mindset”, which is important. Each will also have a variety of tokens:

The grey disks are Quarters, and you’ll want to use a certain amount depending on what difficulty you want:

More on those later. The red tokens are Health and the Blue tokens are Wild Power, used for special moves. Give each player tokens equal to their Health and Wild Power values on their card. The brown tokens are Item / Obstacle Tokens. They’re gonna be cardboard in the actual Kickstarter; I’m just working with a demo copy, here, so we’re gonna use our imagination for a few things.

You’ll also want to pick out the Baddies: 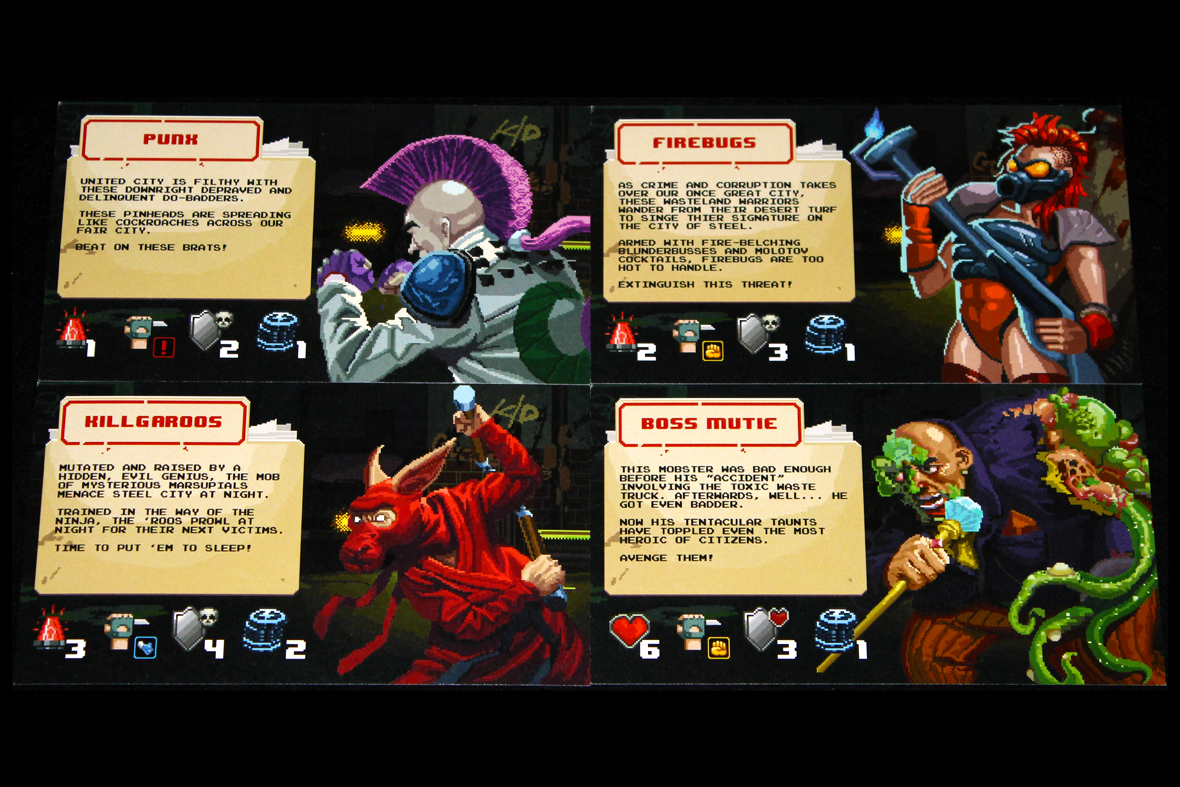 Choose 1 Level 1 Baddie, 1 Level 2 Baddie, 1 Level 3 Baddie, and 1 Boss. Currently, the preview copy I got only comes with one of each, but I’m hoping that with stretch goals and expansion content and such that there will be plenty of content for you to mix-and-match. Like the characters, the Baddies will have both miniatures and the pixellated standees for you to use, so you can choose whichever you like best. 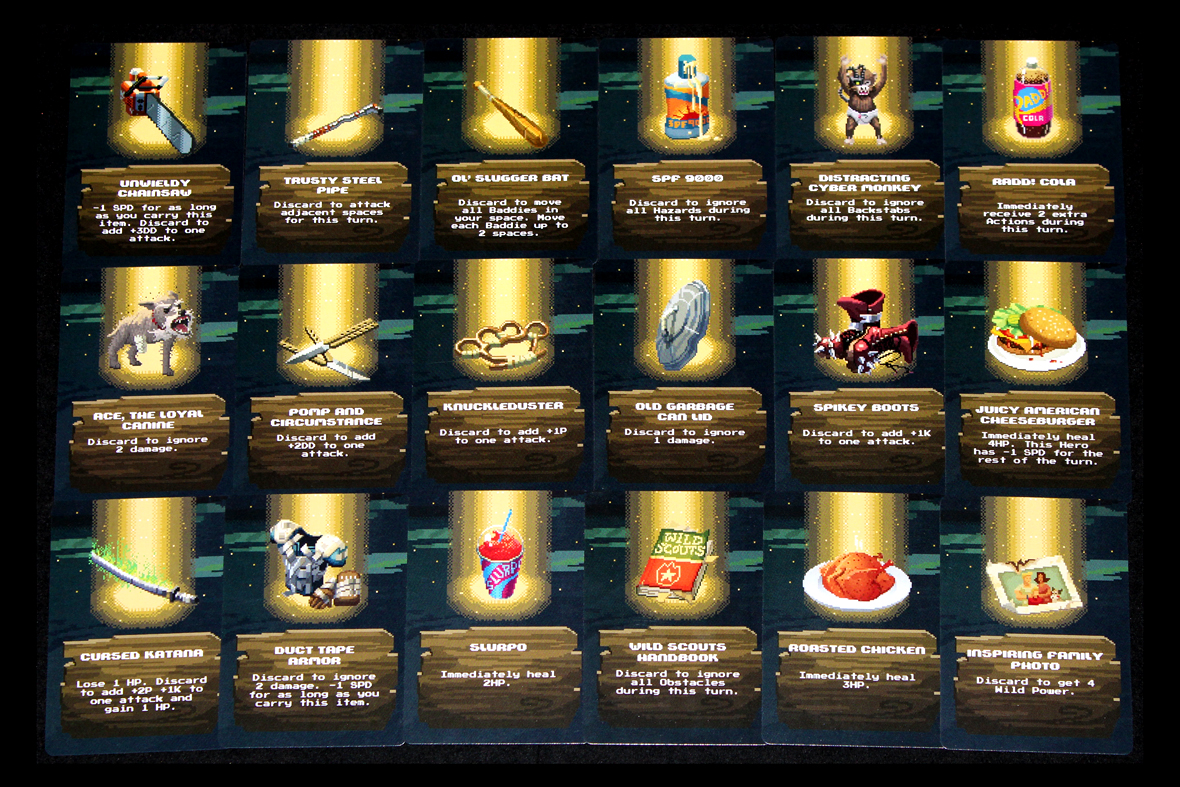 Set them nearby, but aside, for now.

You’ll want to shuffle the Baddies’ Behavior Cards together (Levels 1 – 3):

Those will determine which Baddies activate on their turns and what they do. Also, shuffle the Boss Behavior Cards, but set them aside until a later turn: 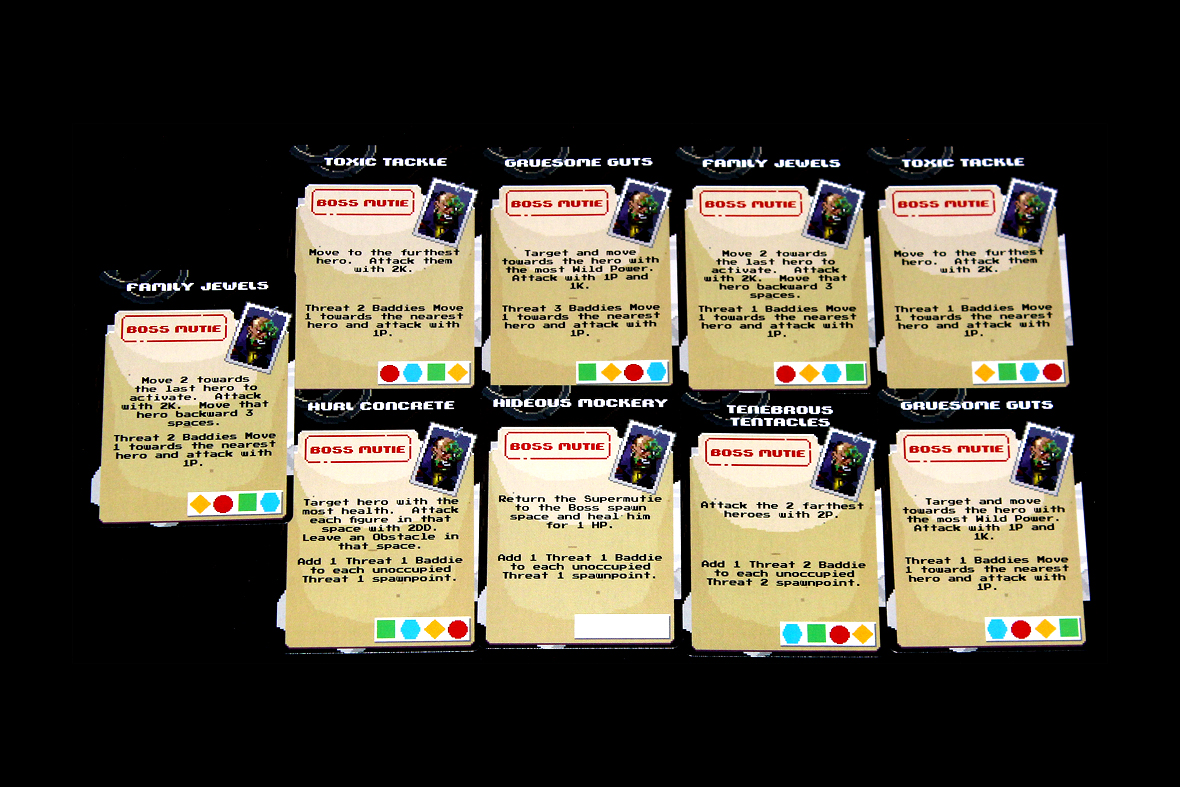 Those affect the Boss’s movement and attacks. Now, set out the dice:

The yellow dice are Punch (P), the blue dice are Kick (K), and the red dice are Danger Dice (DD). Now, set up the streets themselves: 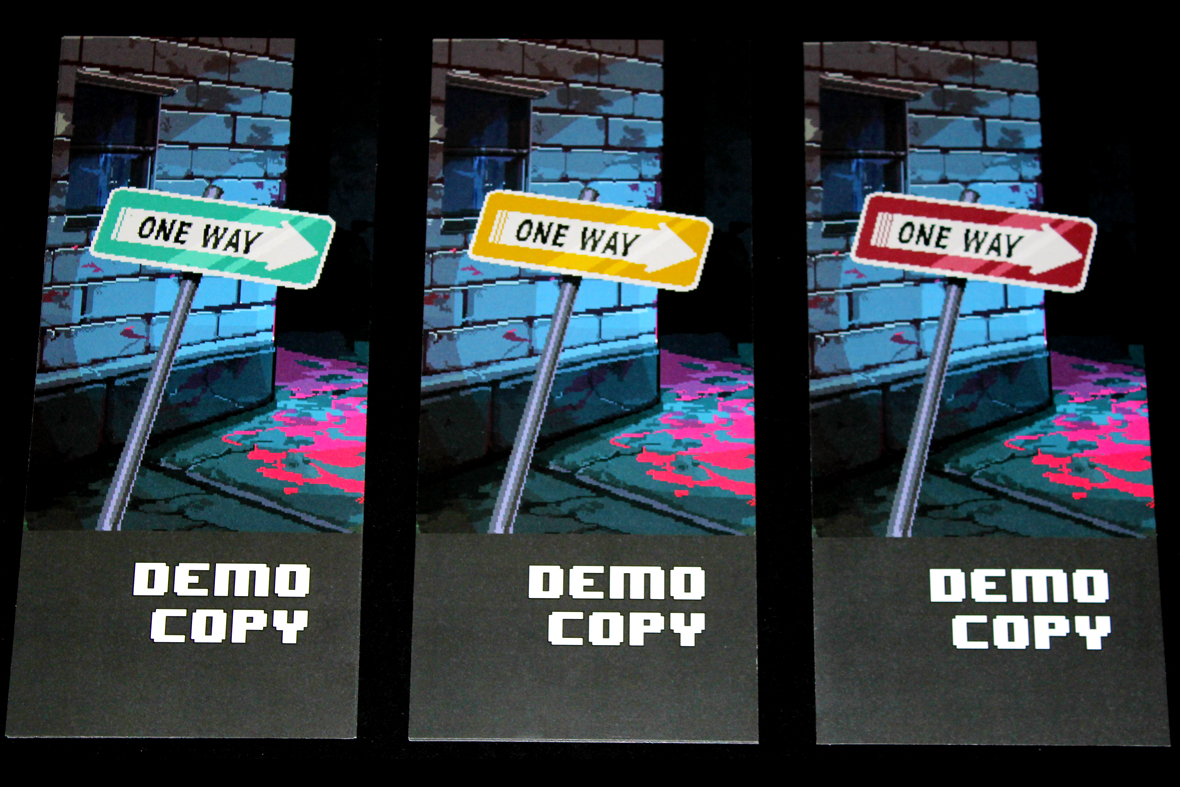 Flip the top three Street Tiles and lay them left-to-right. Now, add Baddies on all the spaces with sirens and a number on them; those are spawn points for those Baddies. Once you’ve done that, each player may add their Character to one of the left-most spaces. You should be all ready to start! 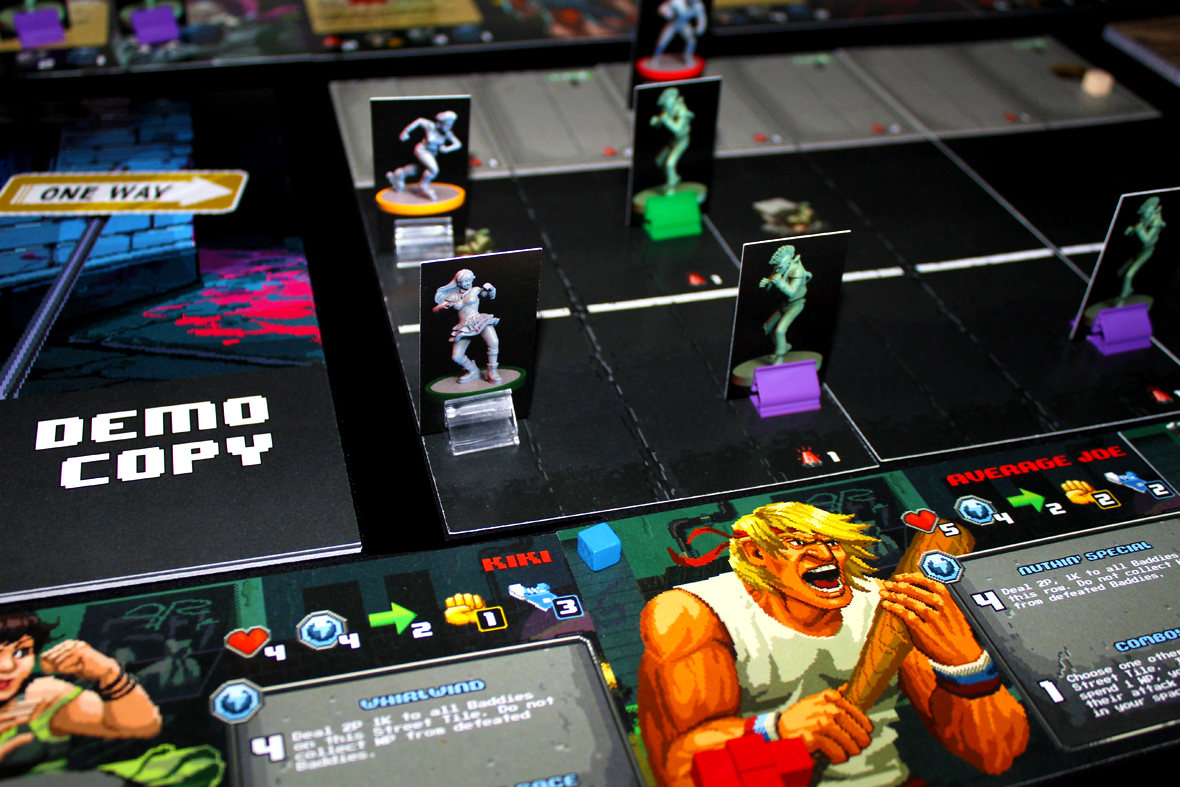 A game of Streets of Steel is played over several rounds. Each round has a Characters Phase and a Street Phase; I’ll go over each in turn. One thing worth knowing is that there are many names for spots on a street:

The Character Phase is made up of several turns where each Character gets a chance to activate. When activated, the Character can perform up to 3 Actions (and may repeat Actions, if so desired):

Perform your three actions, and then the baddies get to go. Baddies take a turn after every Character turn. It’s sort of like drawing Infection cards in Pandemic. Anyways, flip the top card of the Baddie Deck and perform the action indicated. There may be a Redraw symbol on the card:

If that appears, that means that there must be at least one of the Baddies of the named type on the board for this effect to take place. If not, it’s ignored and discarded, and you must immediately draw another card. Rough. Most of the cards have Tiebreaker options (the row of symbols), showing you which character they target if they ever have a tie on which character they’re attempting to pursue. Also, if the path is equal either way, Baddies will always move vertically before moving horizontally. They additionally are not affected by Obstacles or Hazards. Darn Baddies.

Once all players have activated, the Character Phase ends and the Street Phase begins!

Alright, the Street Phase is up next! During this phase, the screen advances and new enemies appear!

Do the following, in order:

Play continues until you have to fight the Boss!

Once you’ve gotten the Boss in play, the game changes a smidge. Remove the Baddie Behavior deck from the game and replace it with the more modestly-sized Boss Behavior deck. That dictates how the Boss moves and performs actions after each player’s turn, which is usually bad for you.

When you fight the Boss, you don’t just win if you roll higher than their defense. Instead, you deal 1 damage to them and you gain one Wild Power. When you’ve reduced their health to 0, then you win!

What Happens If You Die

When you die (run out of health), flip your Character sheet over, and also remove your Character from the board, for now. If you have quarters left to spend, you can put another quarter in the machine (removing it from the game) to come back on your turn. Essentially, you start the game from scratch — you are at full health, you have 1 Wild Power, and you place yourself anywhere in the leftmost column of the board. You also have that helpful First Action Invulnerability that you remember from earlier in my review. Fantastic!

Play continues until the Boss is defeated or all players are defeated!

Hm. It seems a smidge … easier? at two and four since you have four characters on the board, which gives you a bit more players to spread the damage around to. At odd numbers, you only have three characters, which does track a bit better if you’re playing with only three quarters, but I feel like generally I’d rather have the extra character.

At even numbers, your main problem is going to be clogged pathways, since you can still only have three Figures on any given space.

Solo is still pretty difficult since you’re also going to be managing a lot of cognitive load. It’s a similar problem with most cooperative games with perfect information — you can play it solo, but, like Spirit Island, it may be too much for your poor hamster brain to process all at once. I’ve had this problem with Burgle Bros. where I’ve basically never lost on the two-floor variant as long as I’m playing with another player who will watch my back. As soon as I fly solo, I’m Icarus heading straight towards the sun. It’s still fun, but it’s tough.

Either way, I don’t really have a strong player count preference — I think it’s fun at any of them. 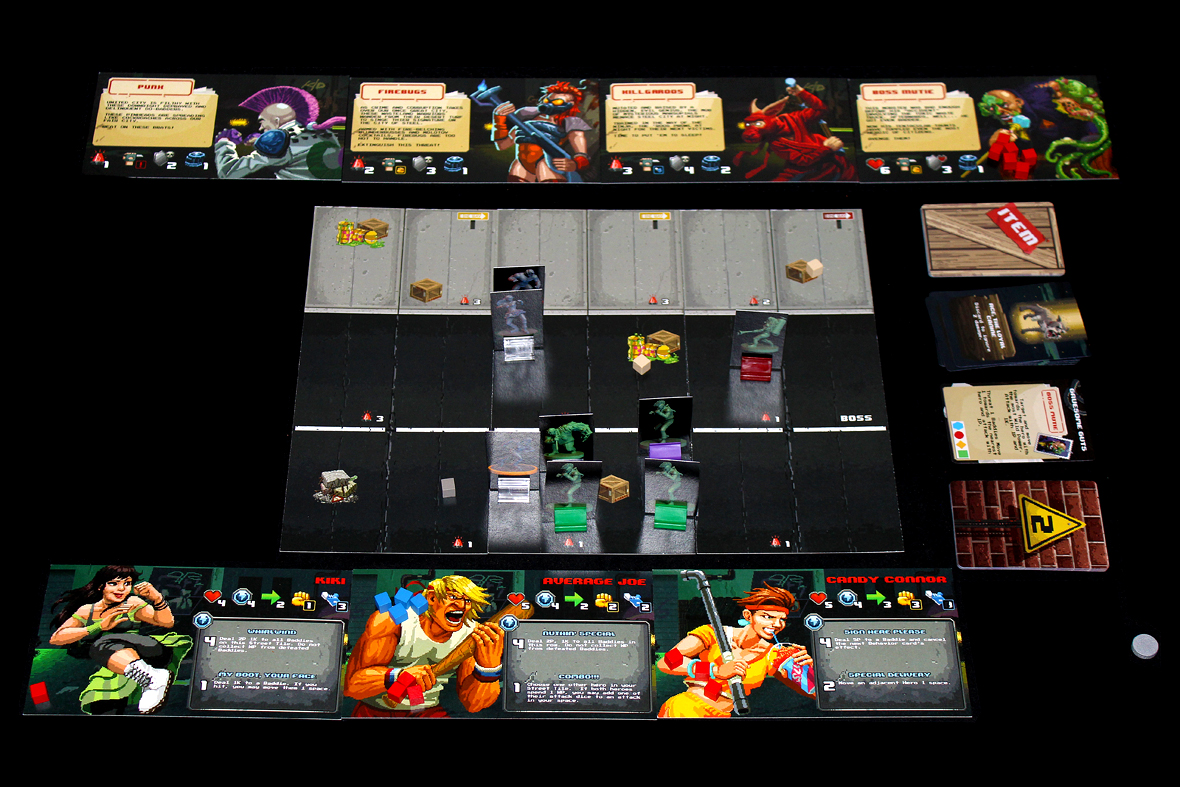 I’ve had a lot of fun playing Streets of Steel! I’ve tried out several of the characters and they all play well in their own wacky ways. The natural draw for me is the theme (and its implementation in the actual side-scrolling nature of the board), sure, but I also appreciate that it’s cooperative and lets us strategize on how to beat up bad guys most efficiently. My friends and I would cheer for great dice rolls, lament bad ones, and everything in between, and we had a wonderful time with it. If you’re like me and moving from video games to board games or if you’re looking for something to remind you of the arcade games you used to play, Streets of Steel is a fun blend of nostalgia and some good parts of modern board game design for a fresh take that still feels familiar. I’ve had a lot of fun with it, and would recommend taking it for a whirl!