I’m always super excited to get in games from outside the US / Europe; been spending some post Gen Con time thinking of ways to get more in to take a look. We’ve already seen MetroX, and Let’s Make a Bus Route is also fantastic (along with Paleolithic [review coming soon!], from Shepherd Kit). Naturally, when the opportunity to check out Pasaraya was presented to me, I jumped at the chance.

In Pasaraya, you are working tirelessly towards the one thing you truly believe in: money. You’ve decided to do so by entering the cutthroat and lucrative supermarket scene, figuring you can make it work. How hard can running a supermarket be, you ask? Well, since you’re doing it via a deckbuilding board game, I can at least guarantee that it will not be as simple as you anticipated. Can you build the foundations of your supermarket empire?

I used to have the whole stack of cards organized in order specifically for a narrative, but that dream died a while back. Anyways, here’s how you set up the game. It’s set up like a normal deckbuilder with some changes.

Start by giving each player a Player Mat:

Also give them a Junior Salesperson card:

You’ll put the Junior Salesperson in your market (along the top line of your player mat). Now, set out the Inventory Cards:

There are only three types. Each player should take two Food and one Clothes and place it in their Warehouse. Nearby, set out the Employee Cards:

There are four major types, but each Employee card is split, with two Employees per card. There are also some Employee-Driven Variant Employee cards (and an AI solo game deck):

I didn’t get a chance to review this version of the game (it’s very different), but you won’t use them for the basic game. Use those once you’re a bit more familiar with the core.

Set out the various denominations of money:

Each player should take 7 Miel and place it in their Warehouse and 8 Miel in their bank. Now, you’ll need to build the Sales Forecast Deck. It’s mostly Sales Forecast Cards:

Note that there are Year 1 and Year 2 cards; that’s an important distinction. You’ll also need the Current Prices Cards;

There’s one card that’s Starting Prices; set that aside, for now: 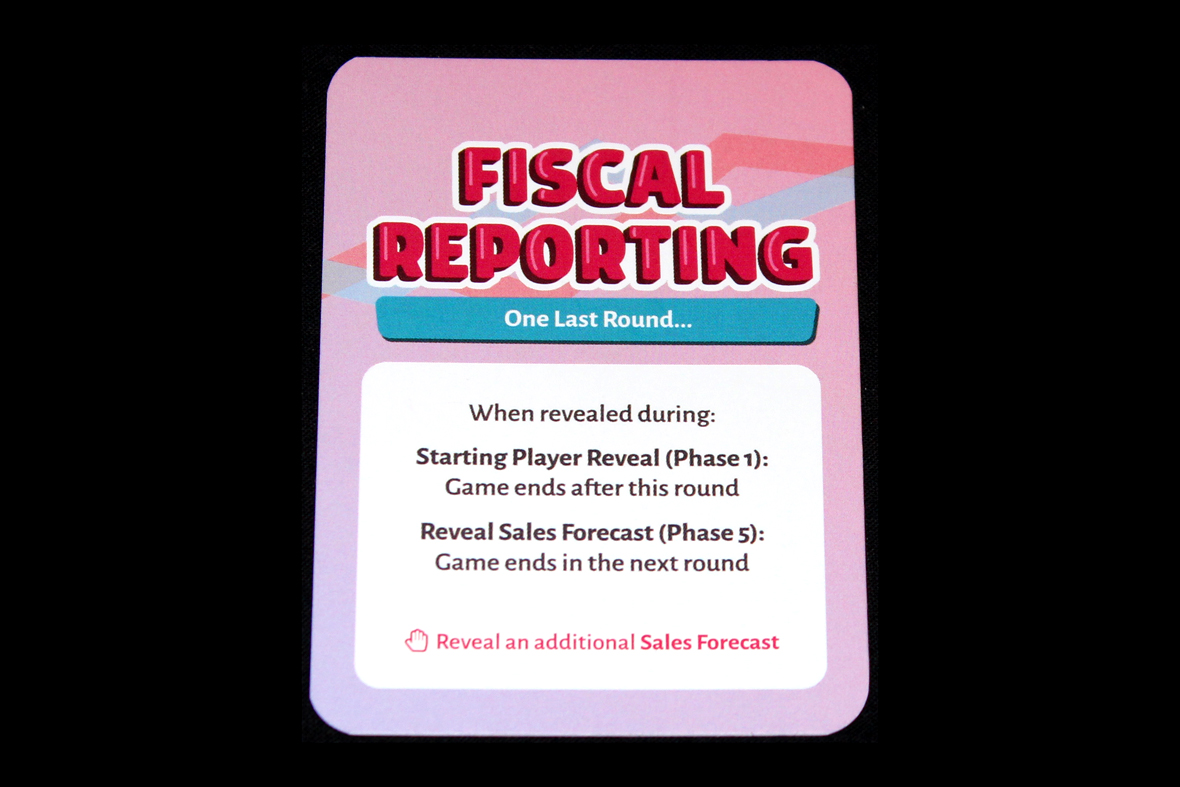 Similar to Coloretto, when you see this card, the game’s about to end. So here’s how you make the deck (from bottom to top, face-down): 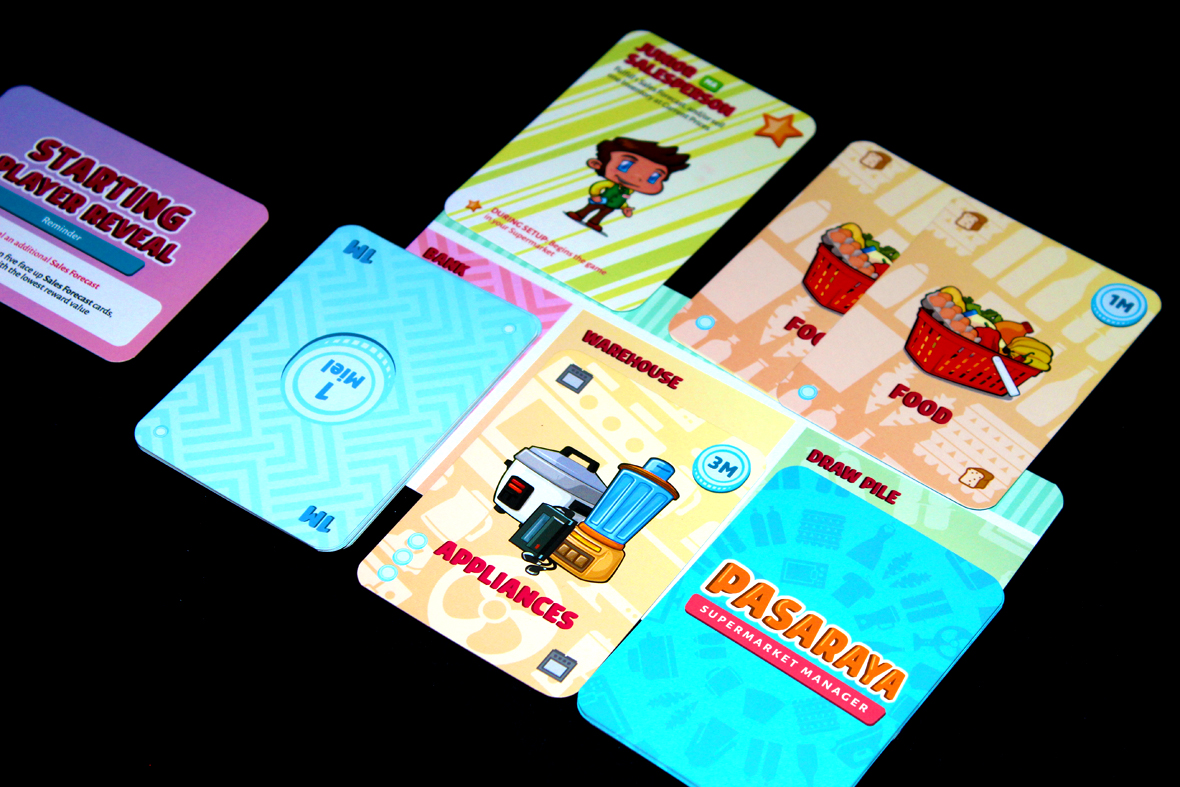 In general, Pasaraya plays pretty similarly to the deckbuilders you know and love, like Dominion, the Dale of Merchants series, or The Tea Dragon Society. On your turn, you’ll be able to perform actions with cards in your hand to hopefully buy additional cards and score money. At the end of the game, the player with the most money wins.

Turns progress in 5 phases, each with their own stuff to do:

So, if you’re the first player of a round, flip the top Sales Forecast card of the deck and place it face-up in the center row. If doing that would mean there are more than 5 Sales Forecast cards face-up, then you must discard the card with the lowest reward value (+X on the card) from the game. If there’s a tie, the player to the Starting Player’s right decides.

Now you can perform actions. You can do any number of these in any order you’d like:

So one thing you’ll often want to do is collect Sales Forecast cards. The only way to do this is via a Salesperson’s ability, which will allow you to collect one by returning the inventory it requires to the Supply. You’ll then add the money on the card (including additional money and excluding reduced prices) to your Bank, as all money you receive goes to the Bank unless otherwise stated.

Once you’ve finished your actions, proceed to Cleanup.

Just discard any cards you didn’t play this turn into your Warehouse. At least you get to keep them, unlike SPQF.

Refill your hand to 5 cards. If you’re out of cards in your deck, shuffle your Warehouse and then use that as your new deck, just like a deckbuilder.

Once you’ve done that, have every player discard all their cards and combine their deck and Warehouse. Tally up your Miel between that pile of cards and the Bank, and then sell all your inventory back to the Supply, earning a number of Miel equal to each card’s cost (sorry; shouldn’t have sold it at cost).

The player with the most Miel wins!

So there’s no real difference in the Sales Forecast deck at various player counts, so the game is just going to be significantly longer at four players than it is at two (just by virtue of “you’ll likely play the same number of rounds, but now they have two players instead of four). That may be something worth noting, if you’re the kind of person who prefers for games to be about the same speed no matter how many players you have.

There’s also likely to be a bit more competition for certain Sales Forecast cards, since there are four players actively working towards them instead of two. Also, interestingly, certain things (Employee and Inventory cards) are limited-supply, so you might run out of appliances if enough players hoard them.

I’d say my personal preference is for two-players, here. Four takes a bit longer than I’d like. 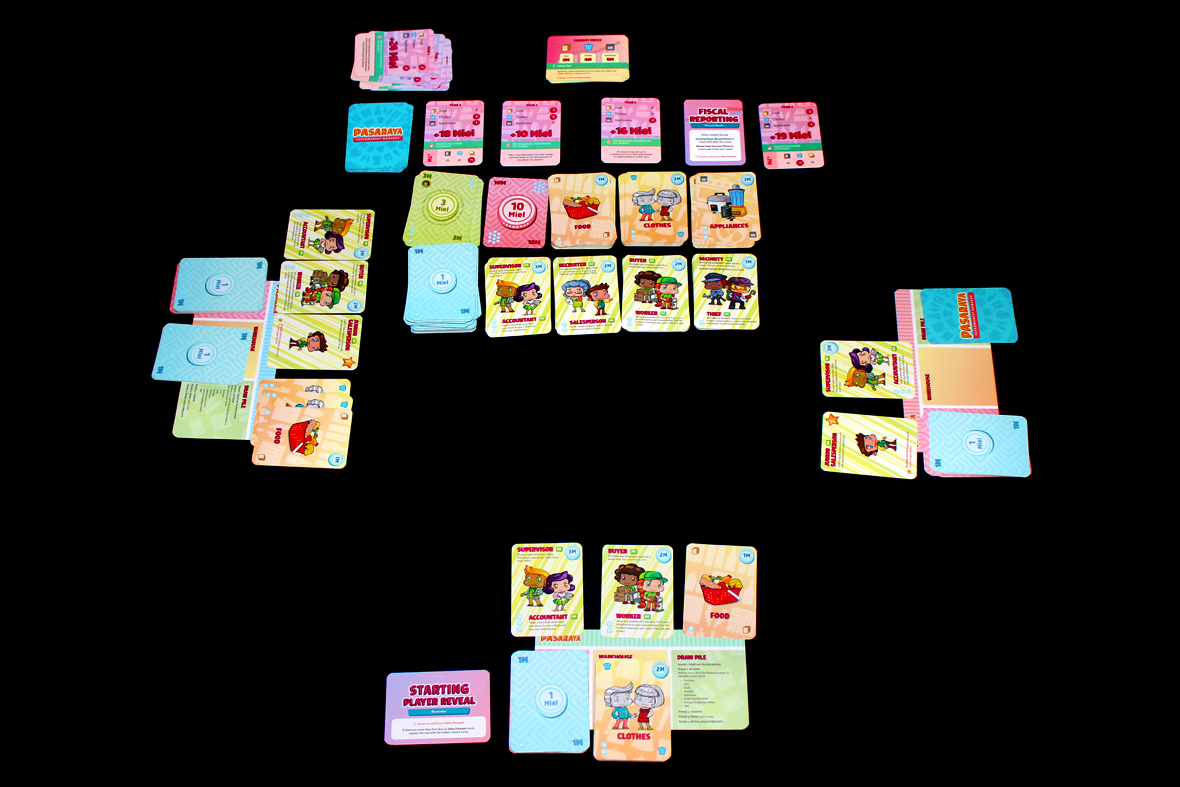 Overall, Pasaraya is solid! I’m looking forward to trying the Employee-Driven Mode once I get a bit better (I’m still not good enough to beat the Easy Mode AI, I think, so, gotta work on that), but I appreciate the wide variety of options it brings to the deckbuilding table. Like SPQF, it does a few things that no deckbuilder on the market right now (as far as I know) is doing, and as a huge fan of deckbuilders, that excites me both for the game right now and as a piece of proof that you can successfully take a fairly-well-done concept and add some spin on it to make it something uniquely yours. Pasaraya does that by delivering on its theme through solid mechanical work to actually create the feeling of buying and selling goods at a supermarket and sending your employees on break and managing your capitalist empire. I wish more board games strove to be authentic and invested in their theme in the same way that Pasaraya is, and if you’re looking for something new in the deckbuilding scene, I’d definitely recommend checking this one out! (That’s a supermarket pun, by the way.)

IF YOU ENJOYED THIS REVIEW AND WOULD LIKE TO SUPPORT WHAT’S ERIC PLAYING? IN THE FUTURE, PLEASE CHECK OUT MY PATREON. THANKS FOR READING!