Well, eventually I have to start writing up the games from Gen Con that I bought, and this is an excellent place to start. This is a bit of an interesting case, since I’ll be covering Railroad Ink: Deep Blue and Railroad Ink: Blazing Red Editions separately, both because they’re separate BGG posts and also so that way I can compare and contrast things about the art and mini-expansions that I like in both without having to do a Railroad Ink megapost or something weird. I’m always iterating on my style for you, the readers. You’re welcome.

In Railroad Ink: Deep Blue Edition, you are attempting to build a great network throughout town of railroads and … regular roads so that trains and cars can move in a blissful harmonic balance in your own personal Good Place. However, your construction strategy is … erratic, I suppose, so it’s hard to say just what you’re going to want to build, next. Will you be able to build the best transit network? Or will you end up all washed up? 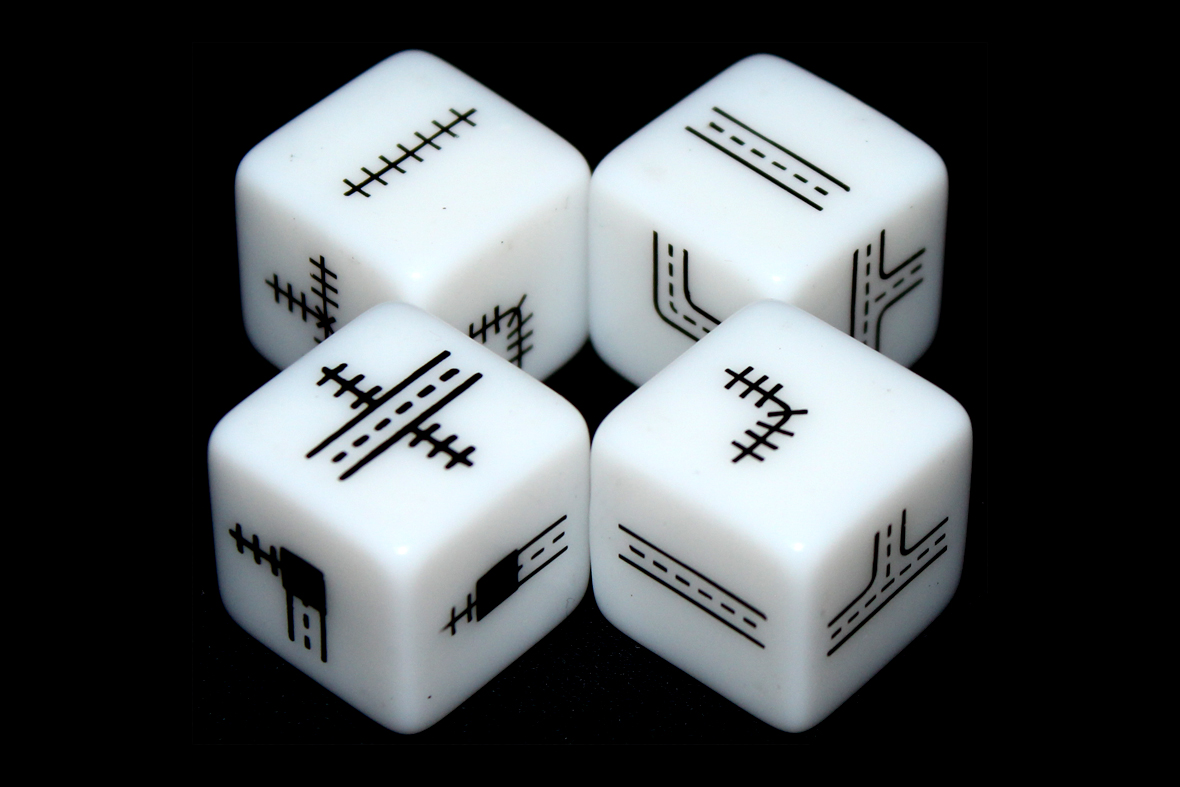 Set them aside, for now. If you’re playing with The Lake expansion, also take the Lake Dice:

Give every player a player board:

And that’s about it. Before we go further, though, I just wanted to comment that the backs of the player boards form a six-scene panorama:

So pleasant! The game comes with whiteboard markers but I’m pretty sure BGG won’t let me upload a picture of whiteboard markers to their site, so I’m just going to forego those and use the ones that come with Let’s Make a Bus Route because they’re fun and colorful. Once you’ve done that you’re ready to start! 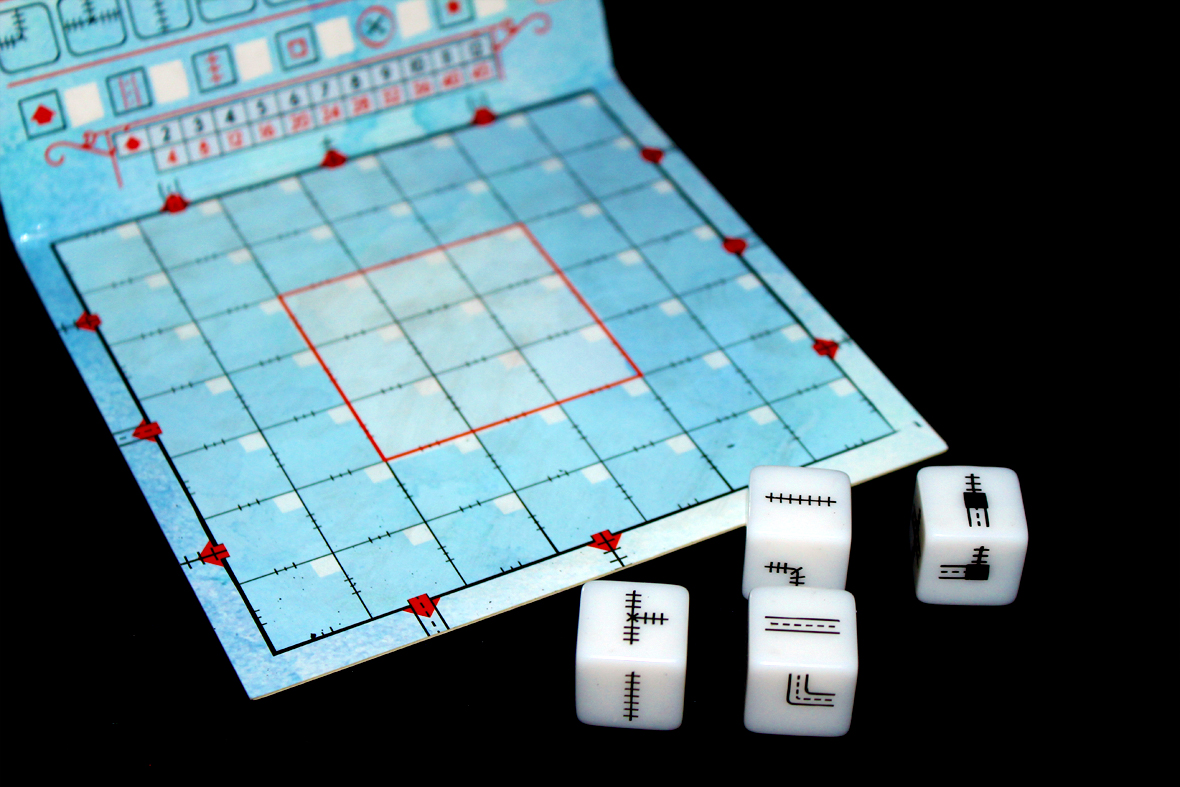 Alright, so, Railroad Ink is a roll-and-write of two types — rails and roads. Your goal is to make a great network of transit in and around town. You do this by connecting roads and rails to one of the 12 Exits (paths leading off the board) around your player board. Each round, you’ll roll the dice and you must add all four paths on the dice to your board. You cannot ignore any of them. There are some caveats: 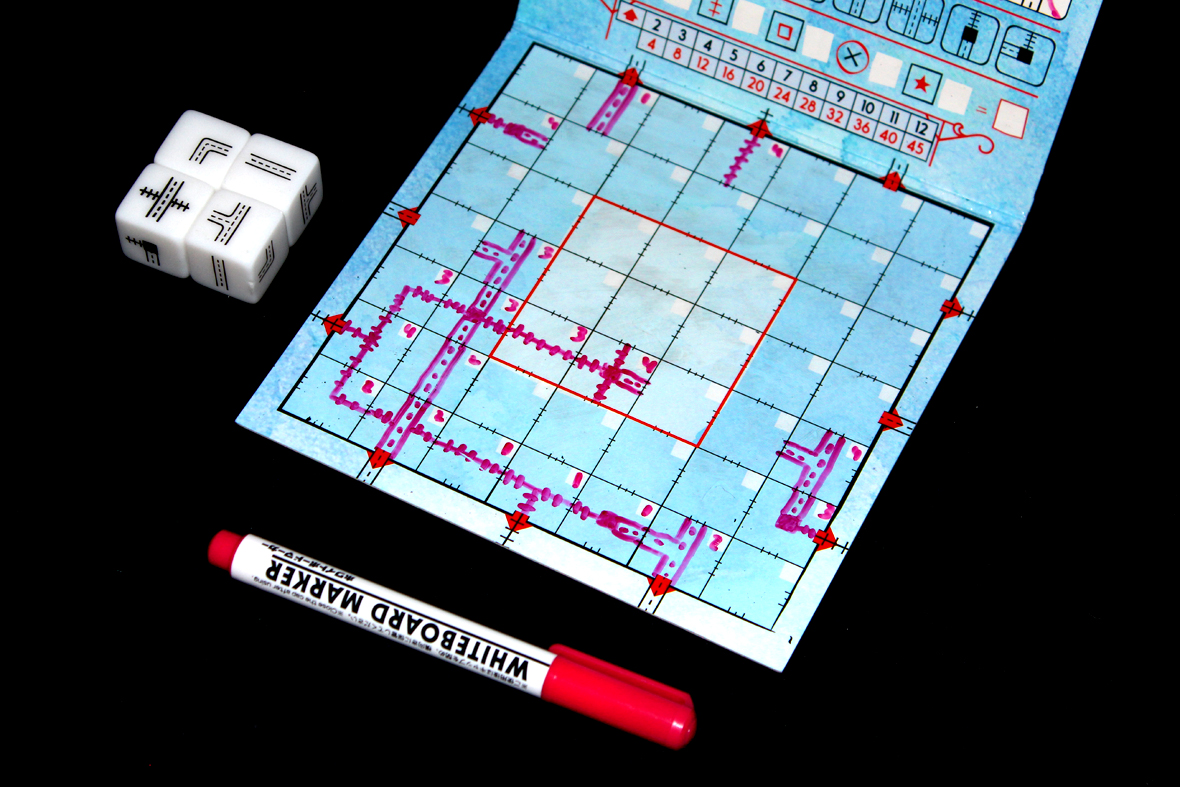 You may also, once per round, use one of the special routes on the top of your player board. They’re basically any combination of 4-way roads / rails. You may only use one per round, and three per game. Once you’ve used one, cross it out. It’s gone forever, now.

In general, it’s helpful to put the round number in the top-right corner of the box as you fill it in; that often helps me figure out how many pieces I still need to place (and also get a general sense of my progression through the game).

Either way, play continues until the seventh round, at which point the game ends. First, put a big “X” in front of every road and rail that does not terminate; then, you score, left-to-right, as follows:

So this is a cute expansion you can add in along with the River dice. To do that, you’ll only have 6 rounds for the game, so play wisely!

During each roll, you’ll also roll the two River dice. Unlike normal routes, River dice are totally optional and can be placed anywhere you’d like. Some have bridges crossing over them, which may or may not be useful to you, lifestyle-wise. As you might guess, a river cannot connect to a road or a rail. If you’re sloppy with your river placement, though, you’ll be penalized — rivers that don’t connect to anything are considered Errors, and will also gain an X at the end of the game!

At the end of the game, you’ll score bonus points. For a given river, you score 1 point per tile in that river, and a bonus 3 points if both ends of the river are connected to the edge of the board. That doesn’t work if you make a moat or some weird thing with rivers, so don’t do it. You’ll put those points in the Expansion box for the game.

The Lake is a bit more complex. Like the River dice, they can be placed anywhere, but they can help you make larger networks, as they add Piers, which are connected to all other piers on the same lake. That’s handy!

Additionally, you can make as many lakes as you want — lakes with open edges are not considered Errors; they’re just fine. However, be careful! At the end of the game, you gain one point for each lake space in your smallest lake. That might throw you off, a bit.

One last fun thing — if any space on the board has open lakes on three of its four sides, it immediately fills in as a full lake tile! Use that to expand your reach (or connect two small lakes into a massive lake. It’s sort of a flood-fill kinda thing.

There’s no player count differences, beyond the fact that it might take longer because the dice are a bit small and you may need to pass them around the table to various players. The thing that’s going to determine your round length is “how slow is the slowest person”, not “how many people are playing”.

As a result, no preference.

Overall, I really like Railroad Ink! Deep Blue is definitely my favorite, both for the nice, calming colors and for the fun (but still pleasant) expansions. I’m a big fan of network-building in games, and the ability to draw the little roads and routes is super endearing. I think the Lake and River were nice additions, as the River is easy enough to teach that you can kinda just roll it up into the base game’s explanation, if you want (similar to Carcassonne‘s River). The extra bonus bits about it that I really like are the fun little dice, the ease of setup and portability, and the solo mode (even if it basically has no rules and you kind of just have to assume it’s “play the base game again, but by yourself”). It’s got the same thing going for it that Sprawlopolis has — I can kinda just pick it up anywhere, bust it out for a bit, and then I’m good to go. If you have even a passing interest in trains, network-building games, or roll-and-writes, I’d definitely recommend checking out Railroad Ink! I’ve had so much fun with it.