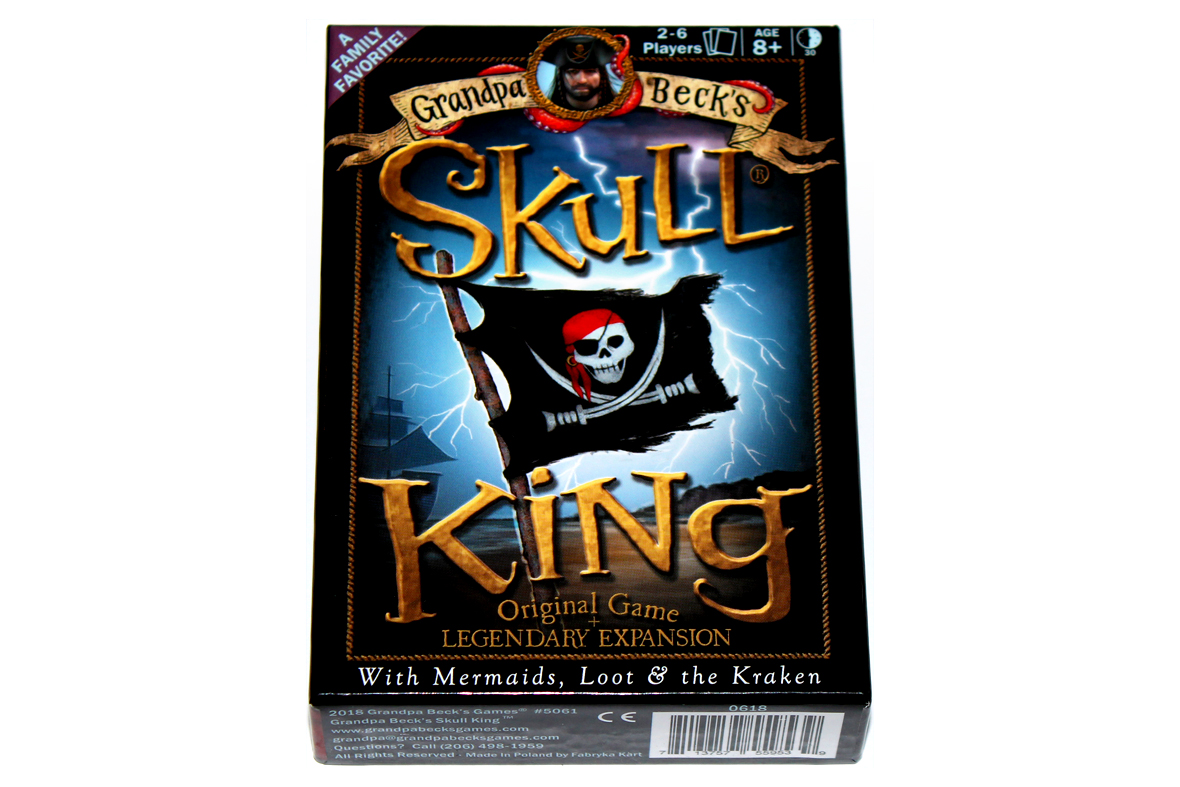 The year’s winding down, now, so I’m trying to hustle and get my last few games reviewed before I head back to {FAMILY HOME LOCATION REDACTED} for a brief respite before the year actually ends. We’ve got the family tradition of watching Die Hard on Christmas Day to look forward to, as well, which is nice. Anyways, before I do that, let’s talk about another new game coming down the pipe, a reprint of Skull King!

Skull King is a trick-taking game similar to the classics, but this time with a twist — you’ll only score if you can correctly guess how many tricks you’ll take before playing any cards! It’ll take a bold player, a strategic player, and a guileful player to pull that one off, especially as the hands get larger; I suppose you can only hope that all three of those players are you. Will you be able to gain a fortune of pirate’s treasure? Or will you lose everything to the dreaded Skull King?

So, shuffle the cards: 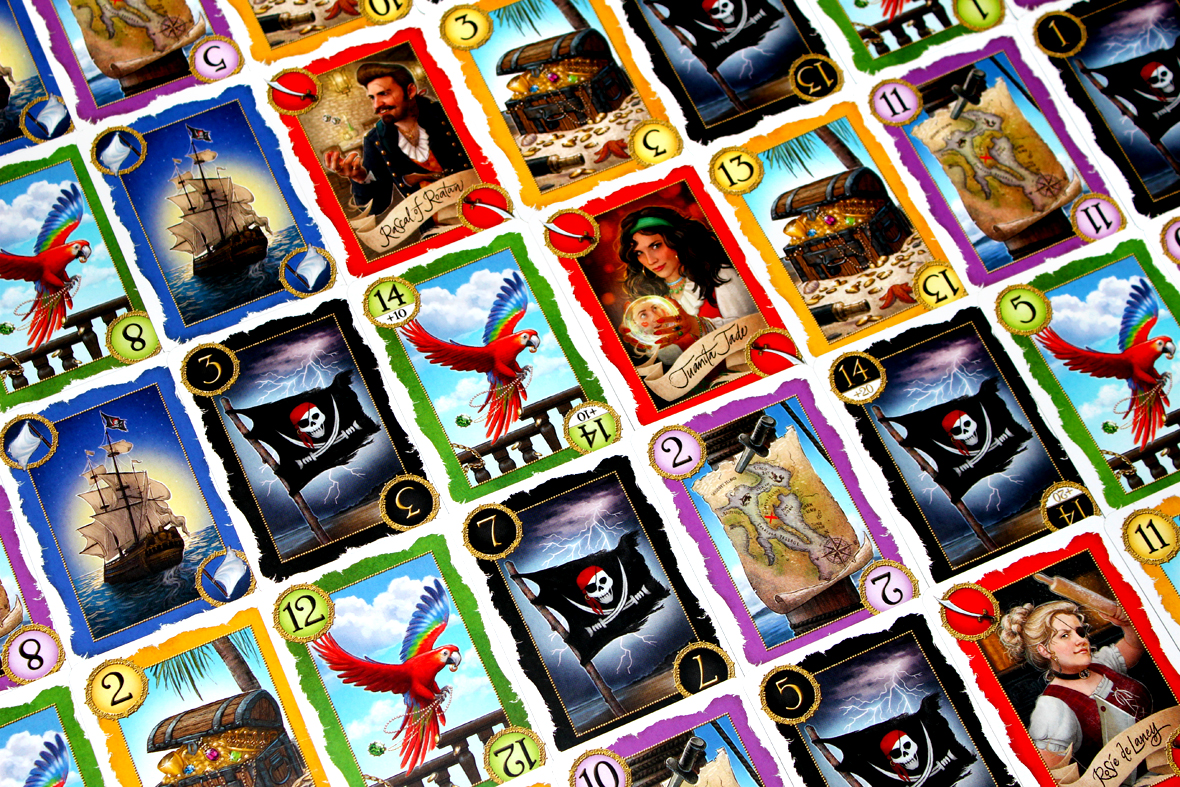 Also set out the bid cards:

They’re double-sided; the odd side is higher than the even side (0/1, 2/3, etc). Have one player be the scorekeeper: 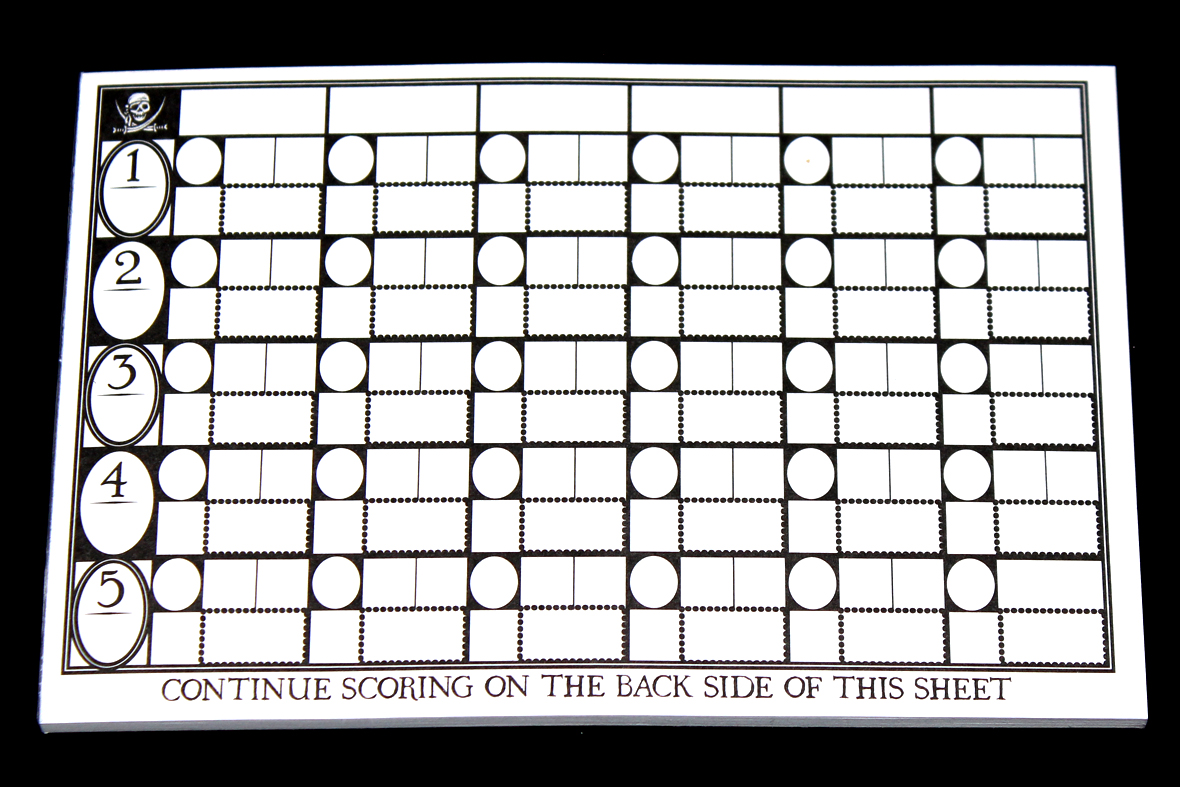 You’re all ready to start! Deal each player one card. 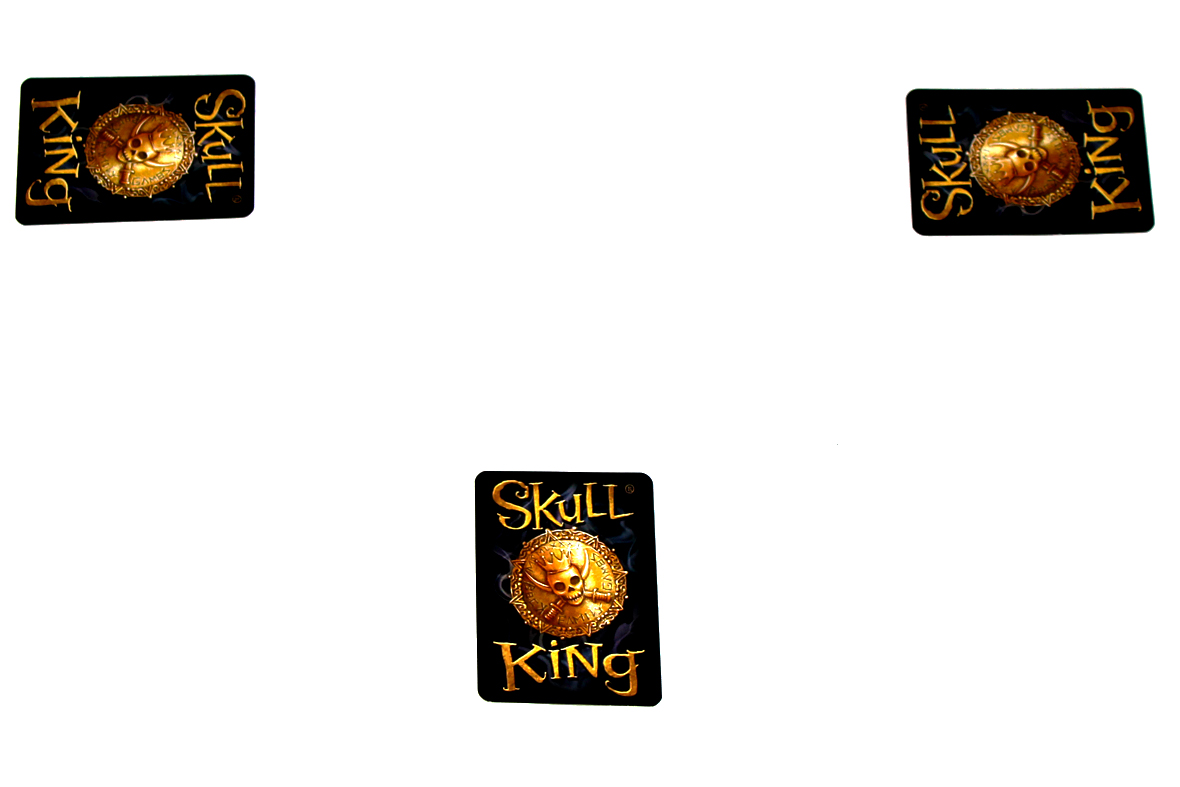 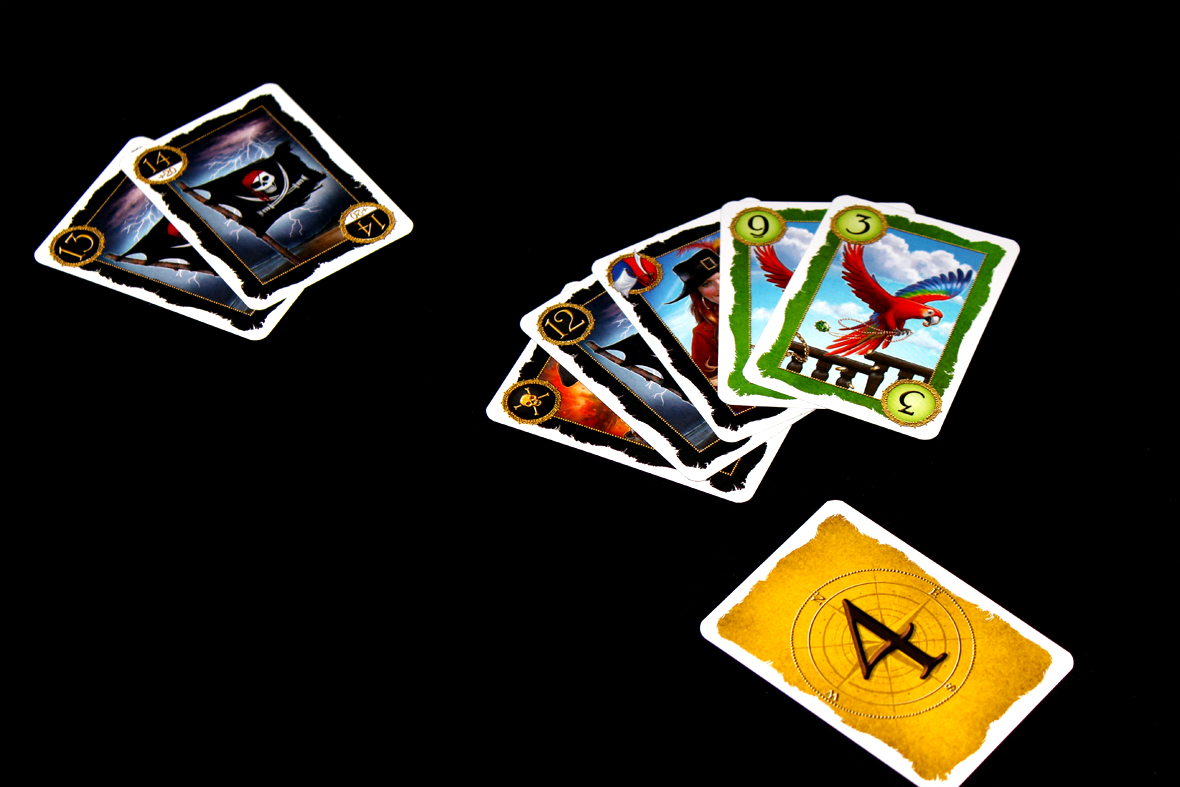 There are some differences between Skull King and your standard trick-taking game: 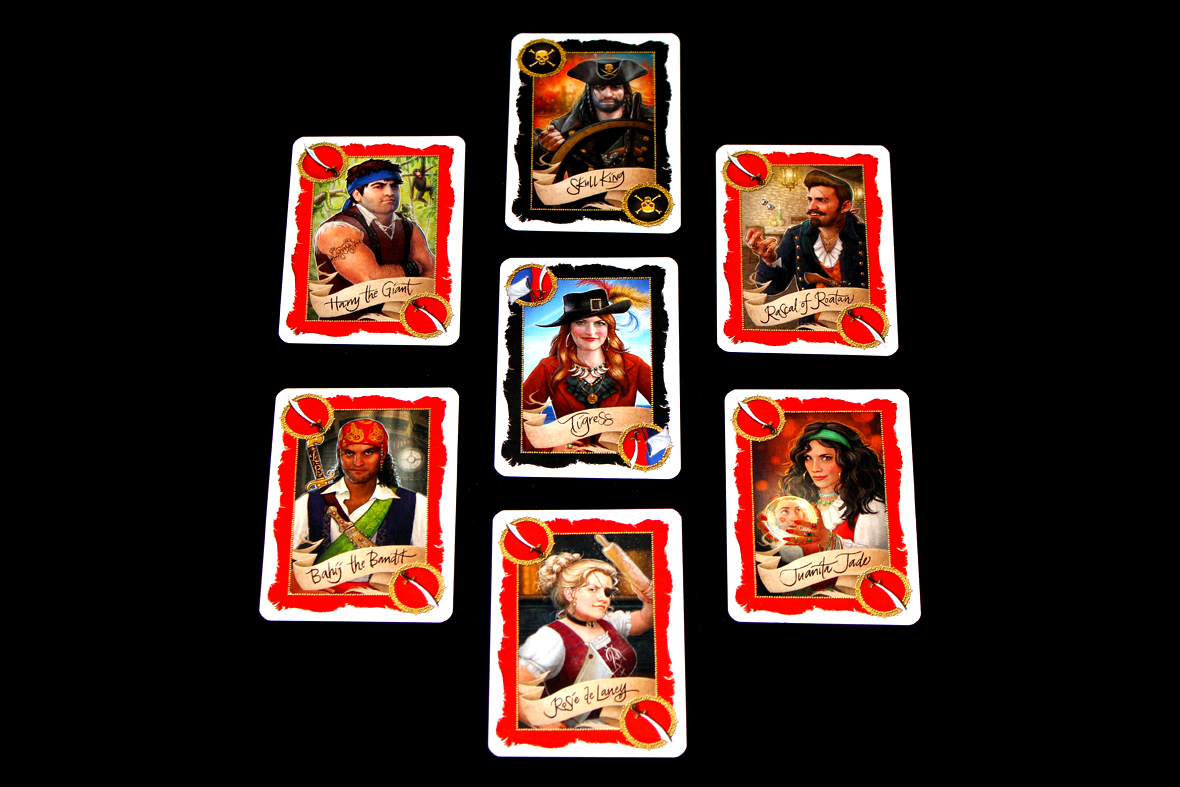 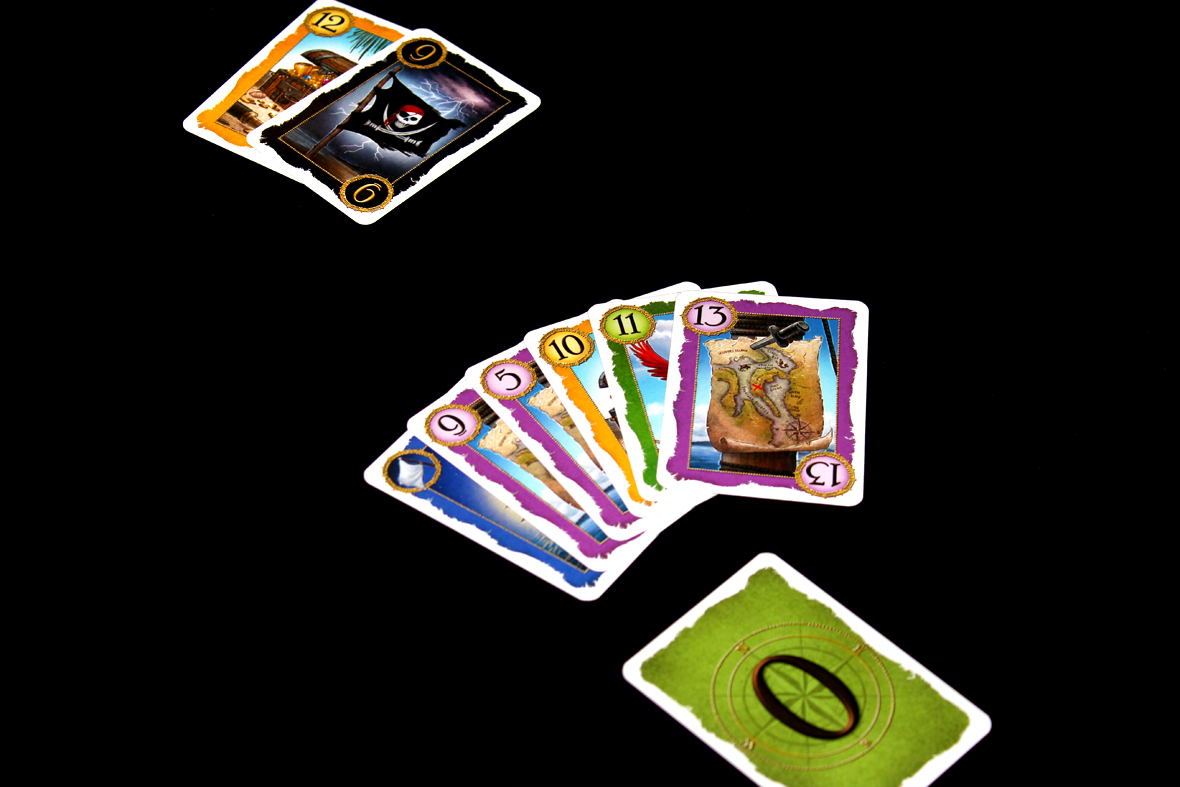 So those are the major differences to the trick-taking component. Now, what makes it like Pikoko (for those of you who have played it) is that you’re not just trick-taking; you’re betting on how many tricks you can take in a round. Once every player has been dealt their card(s), look at your hand and determine how many tricks you can take. All players must then do a rock-paper-scissors sort of motion and say “Yo-Ho-Ho!” simultaneously (hey, it’s thematic) and reveal a number of fingers indicating how many tricks they plan to take this round (in later rounds you may need to use both hands; you can just add the second hand when you reveal). Take the bet card equal to that number, and the player to the left of the dealer begins the first trick. All subsequent tricks are started by the player who won the previous trick. 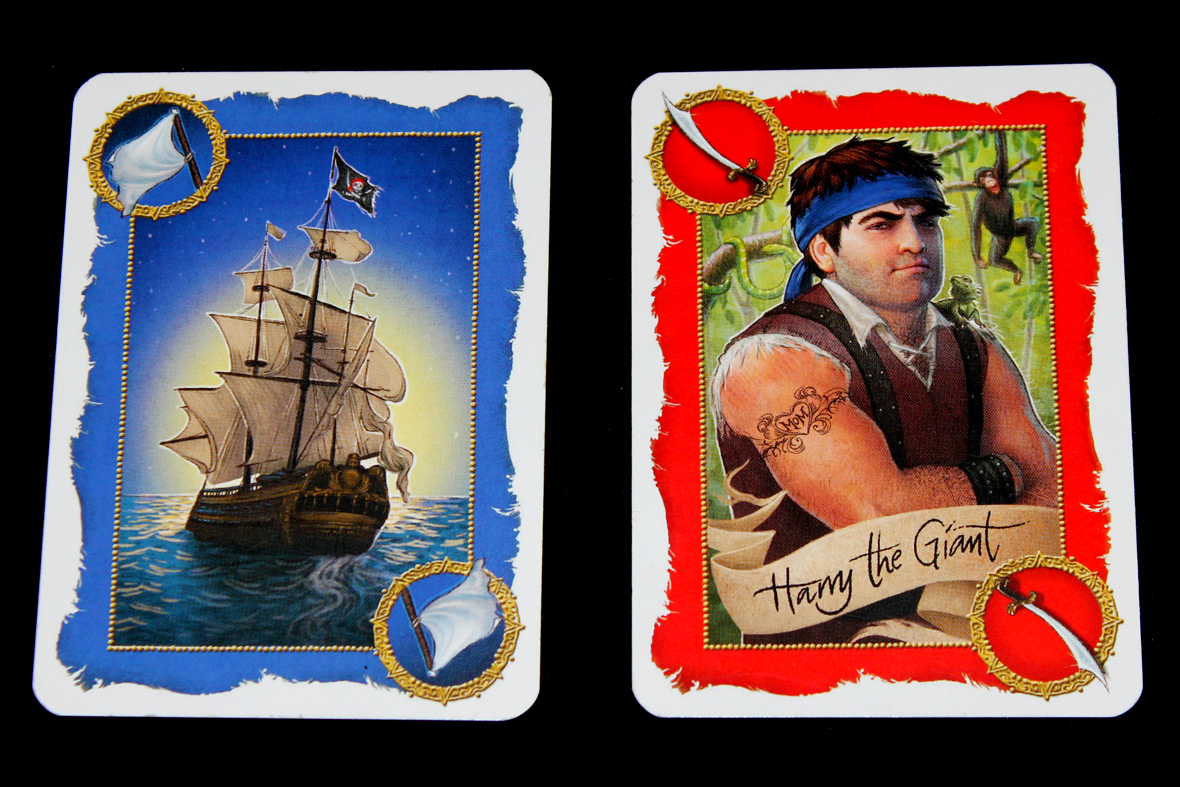 At the end of the round, score!

Note that this means you only gain points if your bid is correct. This also means that if you scored bonus points, then you only get to count them if you made a correct bid. Otherwise they’re just worthless. 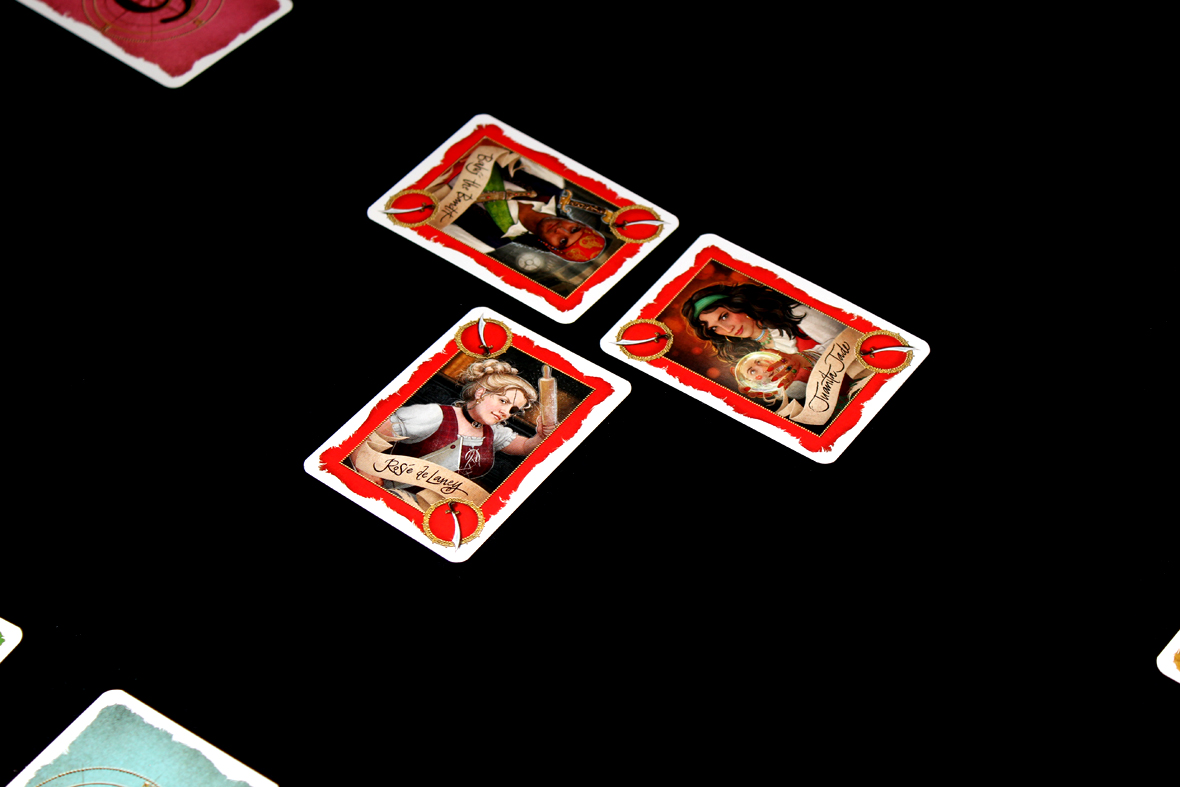 At the end of the game, the player with the most points wins!

It gets a bit silly at low player counts — at two, a bet of 0 is essentially betting you have more Escape Cards than your opponent does, and if you both bet 5 in the final round then the player who has more points just wins the game, basically no matter what (barring some very skillful bonus card plays). At higher player counts, it’s exceedingly chaotic; who will be the spoiler? Is it possible to successfully make sure that all players hit their bids? Do you even want to? It’s hard to say. Also, more cards are in play so you have a better sense of what’s possible, whereas at lower player counts even in the final round you still have 46 cards out of play (twice as many as the number in play) so it’s hard to make good calls. 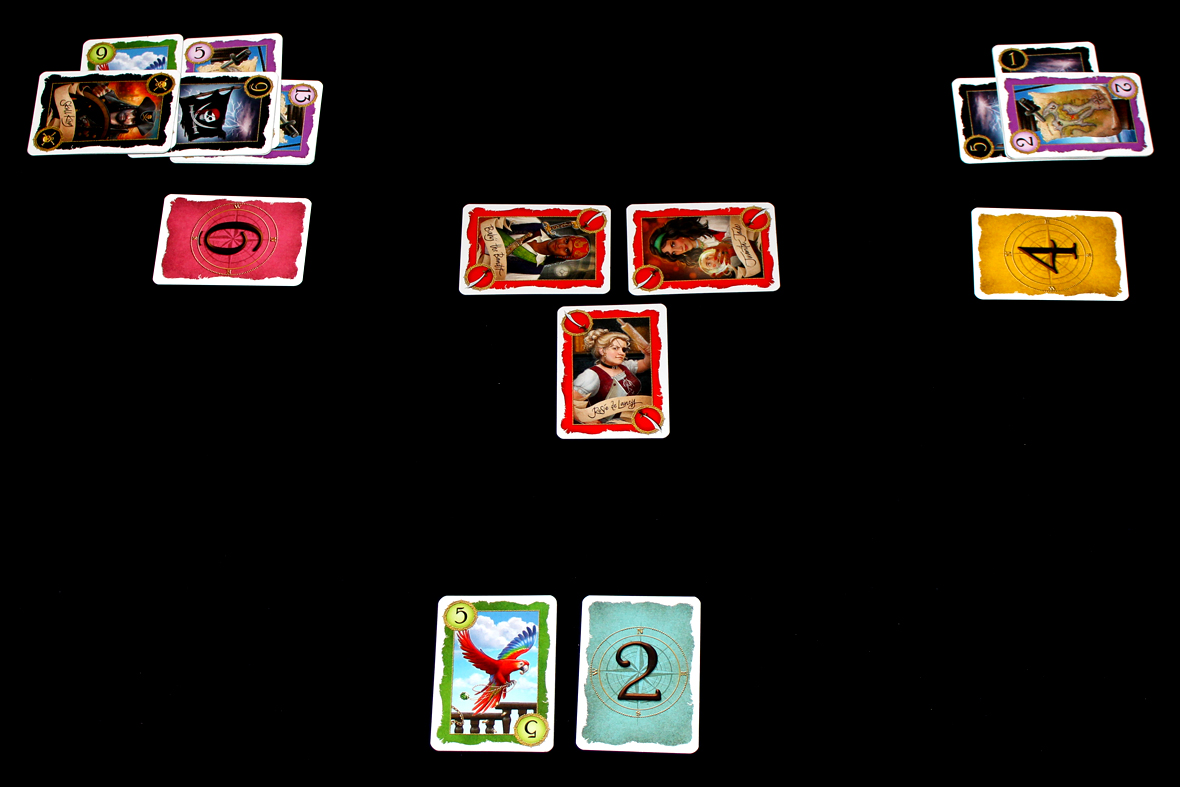 but who won the trick???

Overall, Skull King is a very fun, interesting game! I wasn’t kidding earlier when I said it might be my favorite trick-taking game; I’m normally not a very competitive person but I get invested when I play this one; it’s rough. Not in a bad way, though! It’s just a very solid trick-taking game that’s familiar enough to entice fans of Hearts or Spades but has enough interesting mechanics that fans of more recent releases will also be into it. I think I’m going to try and bring it home and teach my family over the holidays, even though my family is notoriously resistant to playing any board games with me in what can only be called Exceedingly Ironic. Oh well. Back to Skull King, it’s a smart design with solid art, good gameplay, and a lot of tense strategy. I have to say that I’m a fan and I had trouble putting it down. If you’re looking for a mix of the new and the familiar and you’re a fan of trick-taking, I’d highly recommend getting in a few plays of Skull King! I’ve really enjoyed it.