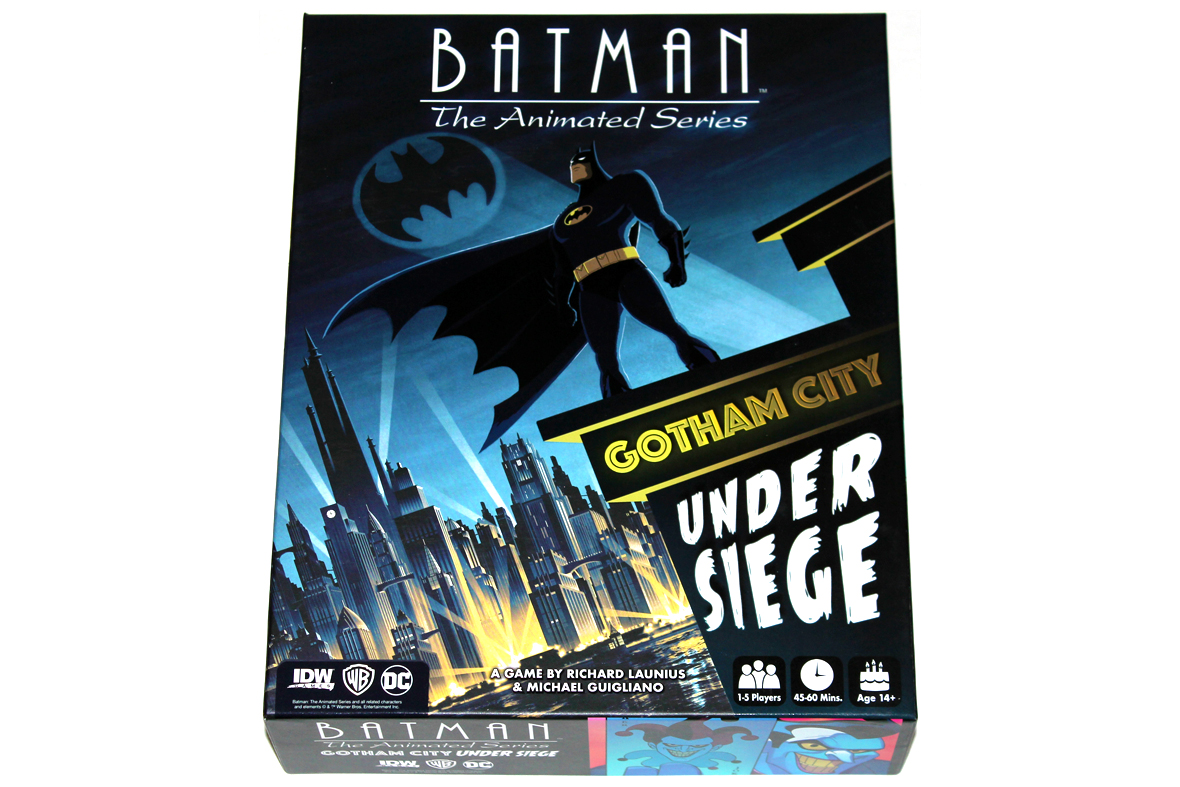 Full disclosure: A review copy of Batman: Gotham City Under Siege was provided by IDW Games.

Alright, back on the IDW Games train for a bit this month. Clearing out a few titles before Gen Con, we’re looking at Sonic the Hedgehog games, Towers of Arkhanos, and a Batman game. There may be even more, time permitting, but it’s most likely going to just be those until August. After August is a whole cornucopia of pain and opportunity, depending on how silly I get at Gen Con, but we’ll see about that when the time comes. Anyways, let’s talk Batman.

In Batman: Gotham City Under Siege, you play as the legendary Caped Crusader or his slightly-less-legendary-but-still-notable-hey-one-of-them-is-just-the-cops friends as they try to survive a few episodes of The Animated Series. Criminals are spreading all over Gotham with large and aggressive plans. You’re pretty sure you can thwart them, but you have more than just you to worry about; the city is in danger! Buildings and the civilians that occupy them need your assistance, and you can’t let them down. Will you be able to foil these villains before their dire machinations leave Gotham City in an even worse state than normal?

So there’s two kinds of setup: Game Setup and Round Setup. I’ll talk about Game Setup here and Round setup elsewhere.

To start, shuffle the City Block Cards and place buildings on top of them. This means you’ll have three left over; put them back in the box without looking at the side with text on them (the Destroyed side). The buildings should have about an inch of space between them: 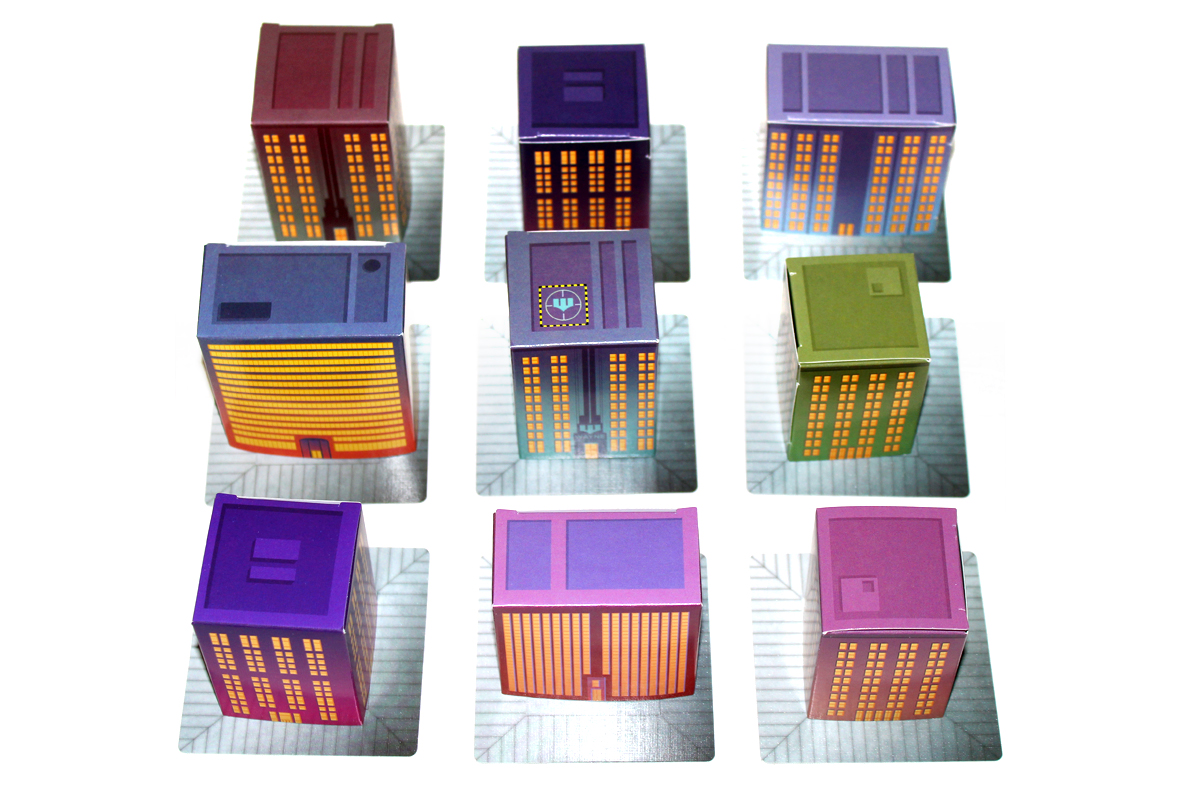 Place the Gotham City track on one side of the Grid; that side is now North. Also place the Bat-Signal token on 2, the Explosion token on 5, and the Citizen token on 8: 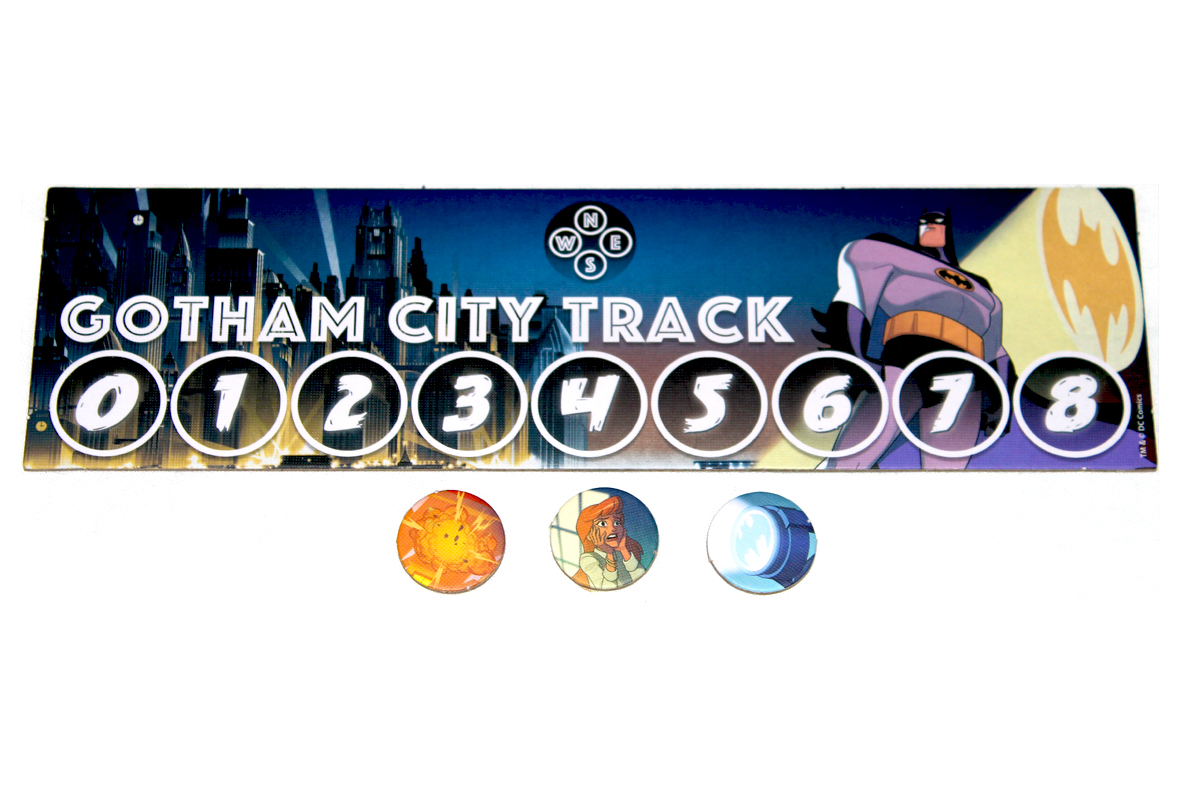 The Act Setup Cards go next; shuffle each Act and then add one to a pile, making a set of four Act Cards: 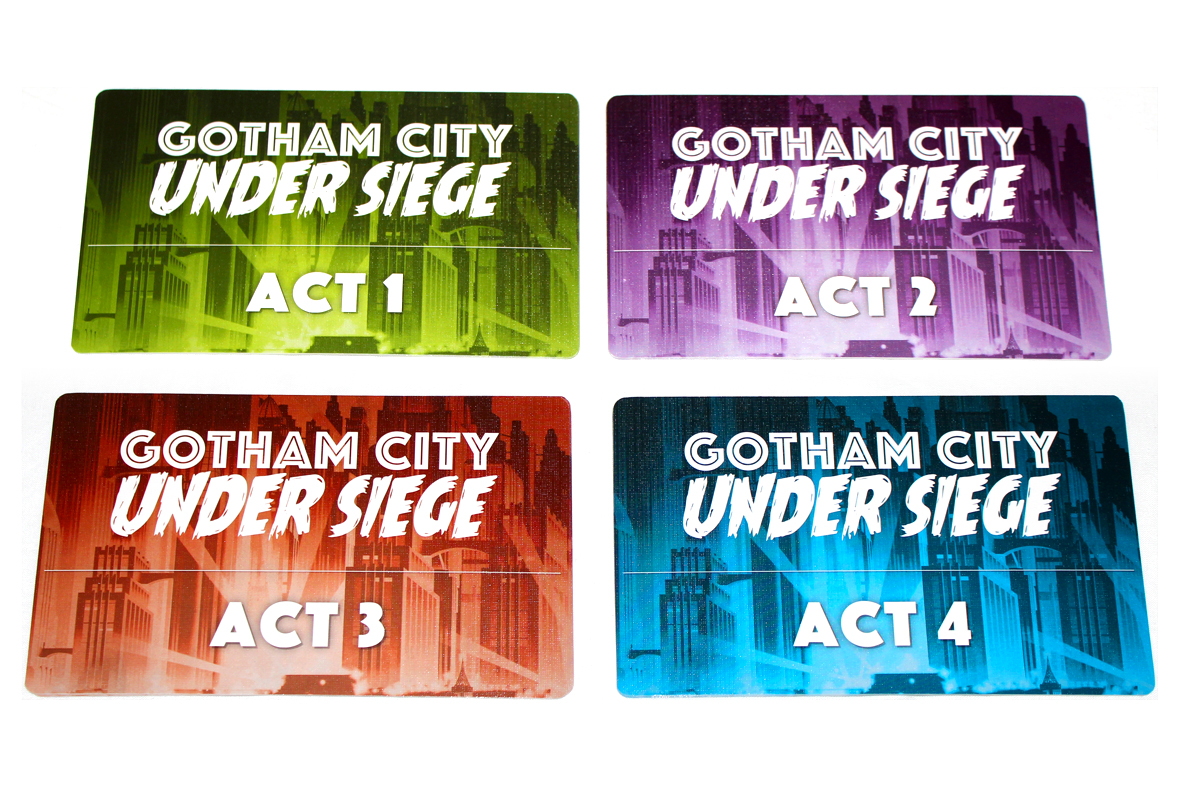 Similarly, shuffle each set of Story Cards; you’ll need the ones for Act 1: 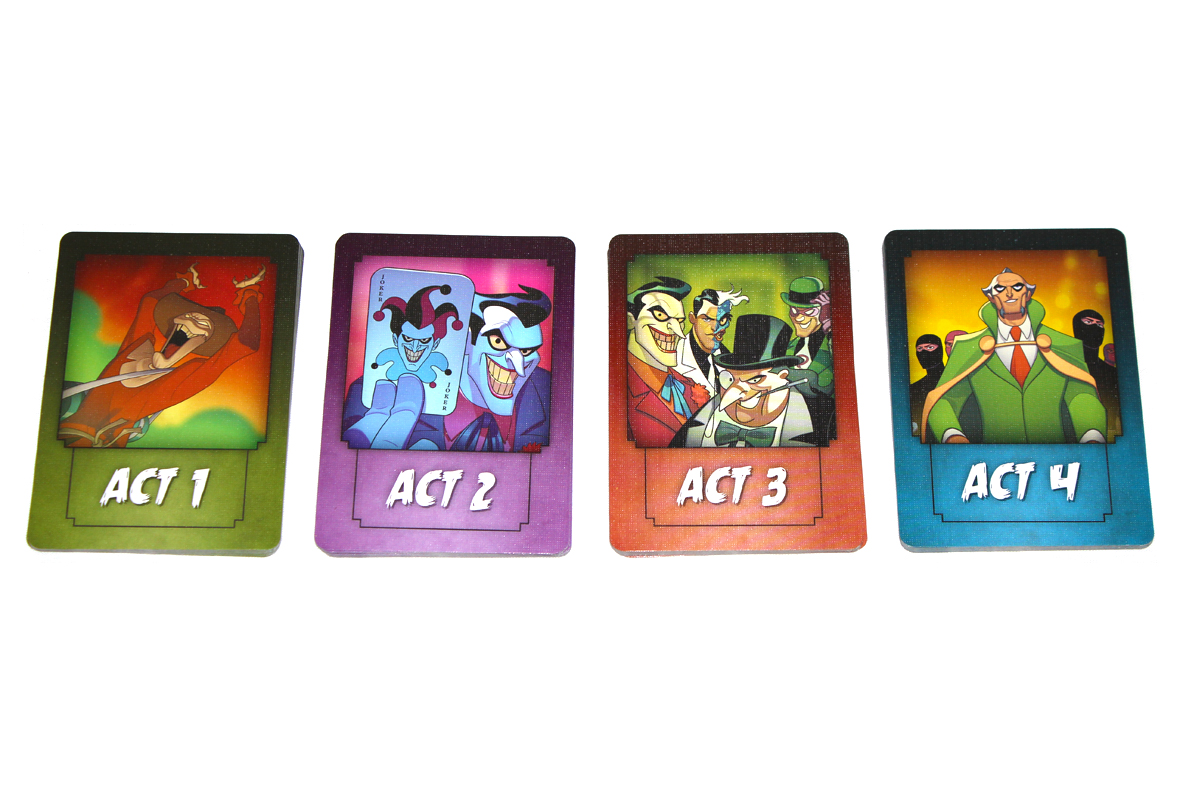 Place the Act 1 Story Cards next to the Act Setup card for Act 1. Now, place all the Villain tokens in the included bag and mix them up:

You should shuffle and set aside the Masterminds, as well: 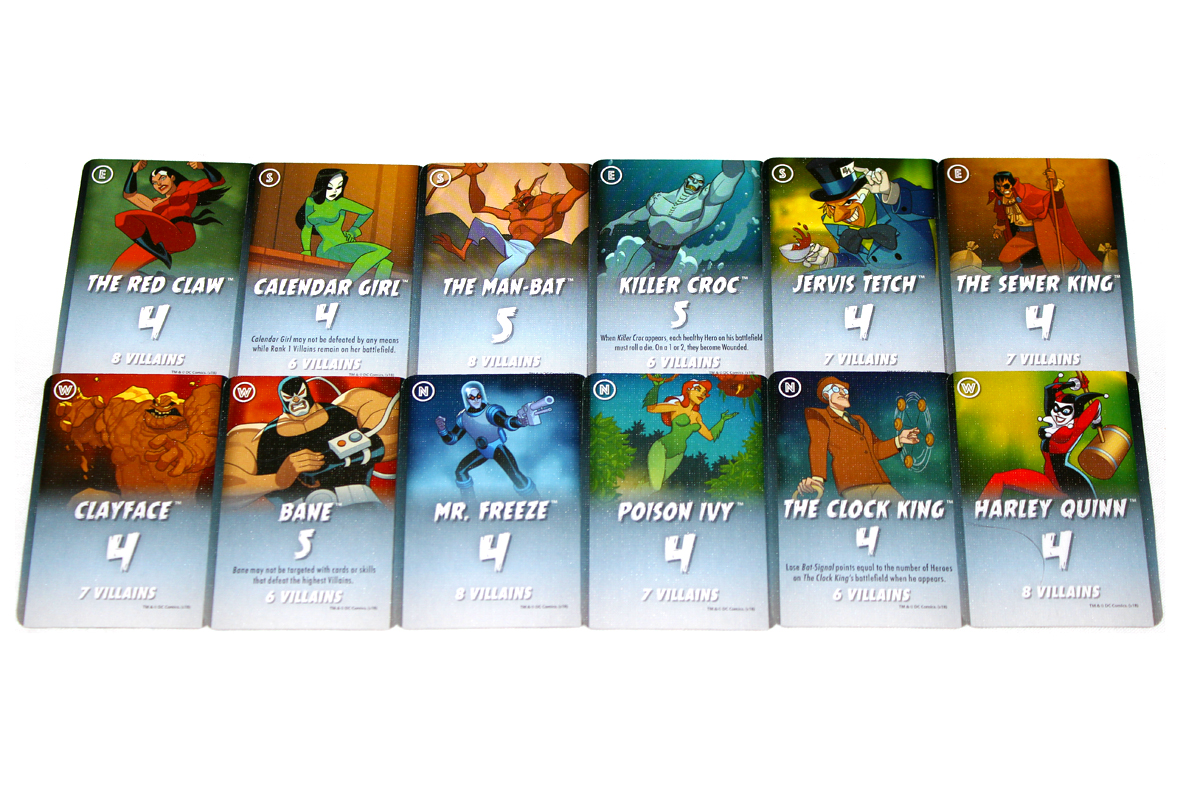 Have each player choose a Hero: 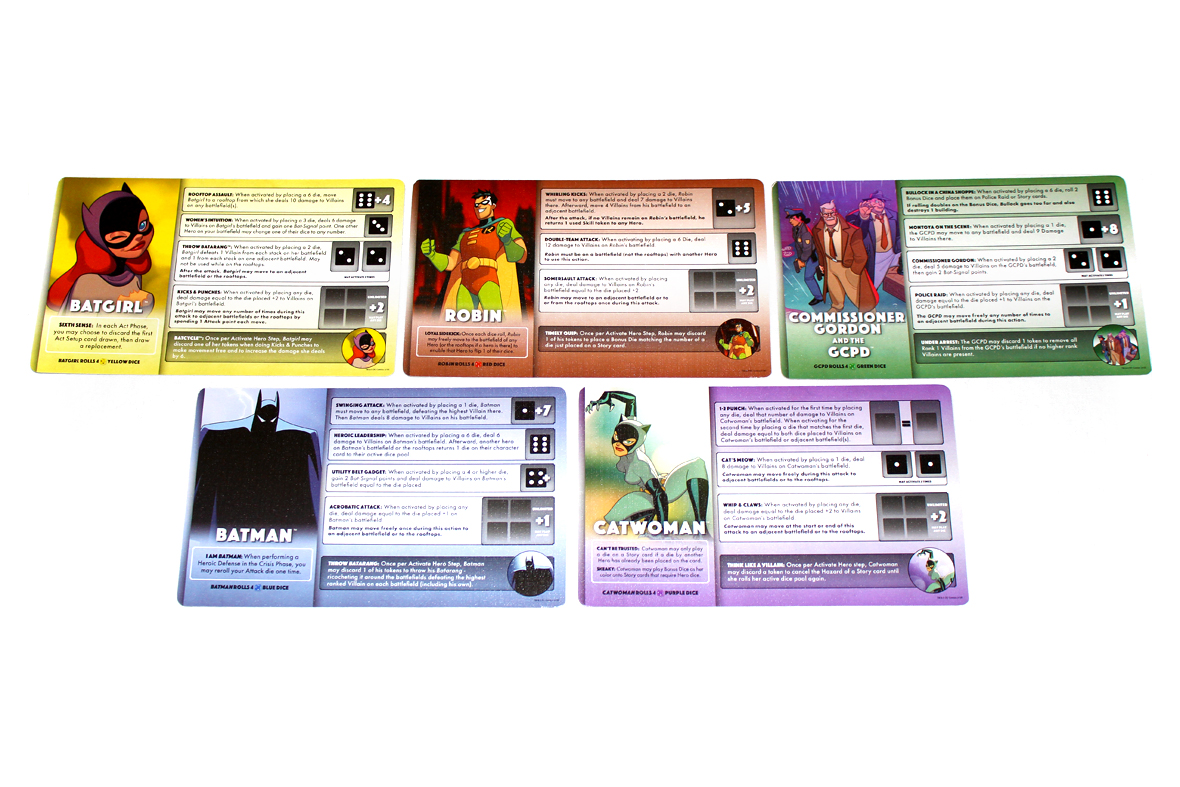 They should take the board and the Skill Cards and Skill Tokens: 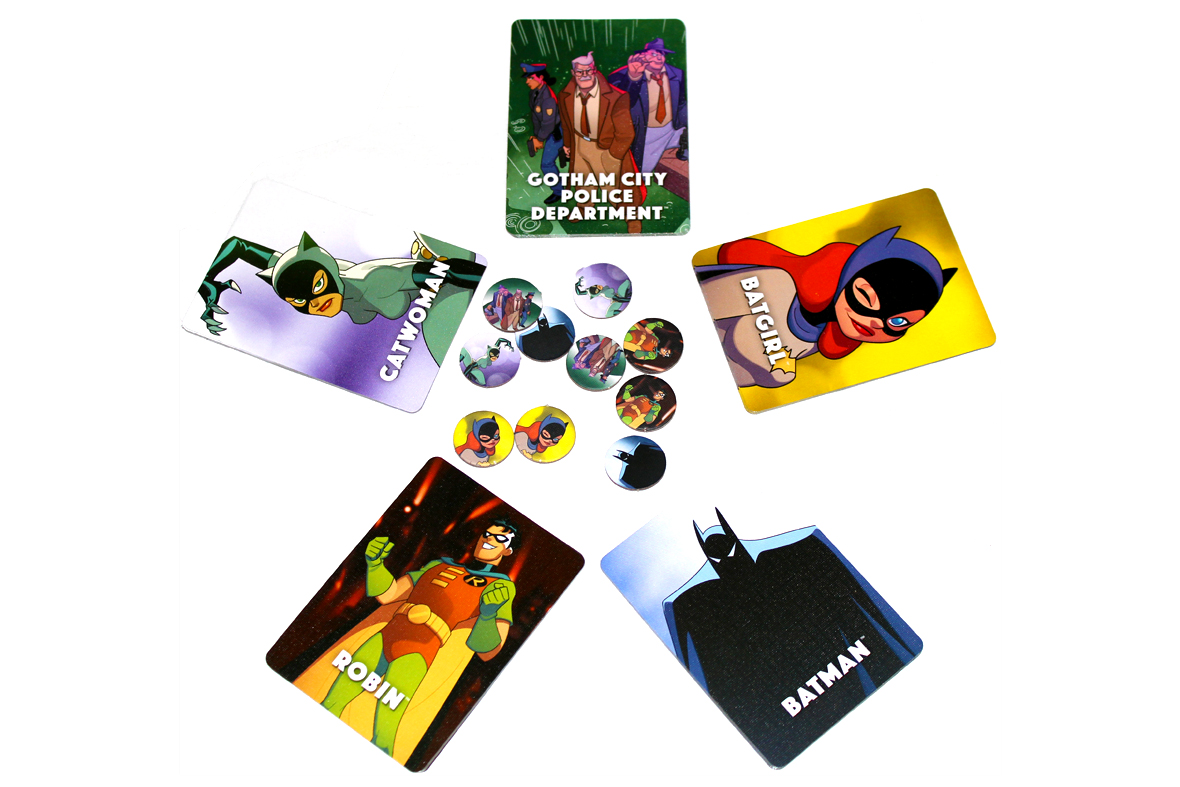 Also give them the Skill Dice in their color: 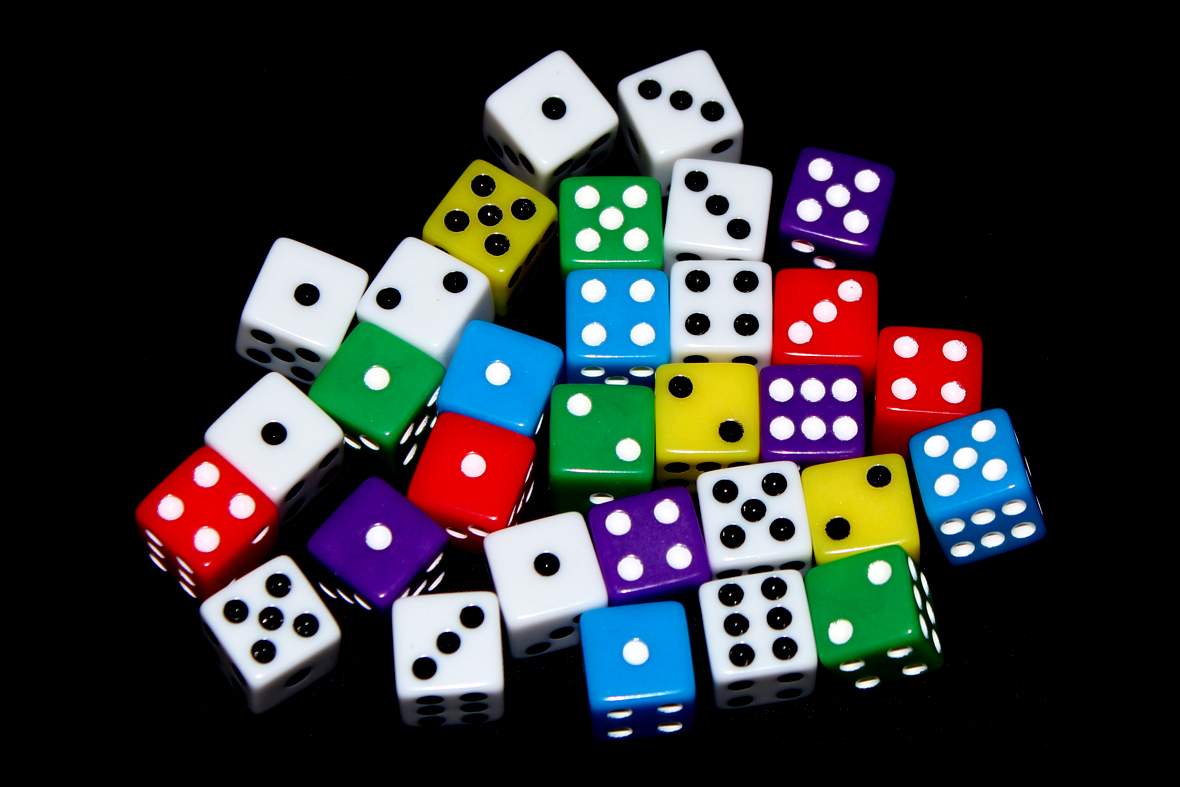 Set the white Bonus Dice aside, for now. Choose a player to be Act Leader (or give it to Batman, if Batman is in play), and in order, have each player choose a side to set their Mini on: 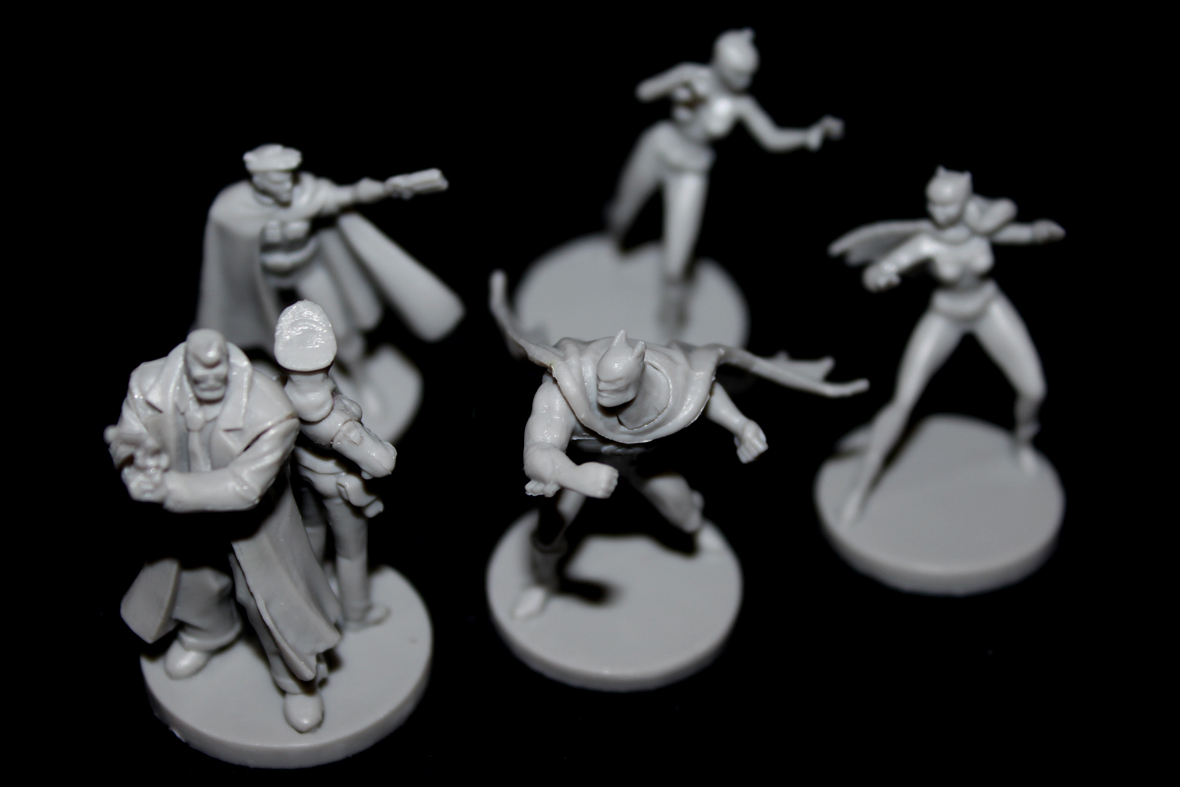 Super cool, right? You can choose the same side, just not the Rooftops. Once you’ve done that, you should be ready to start! 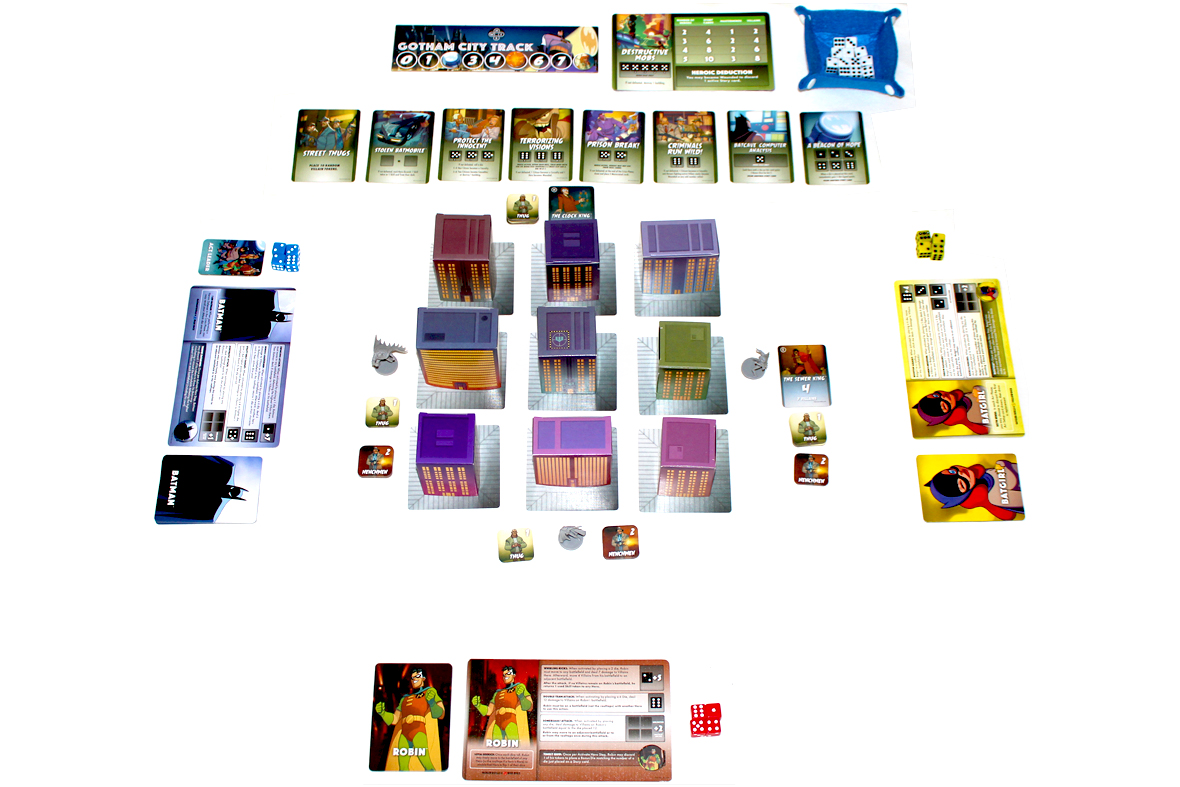 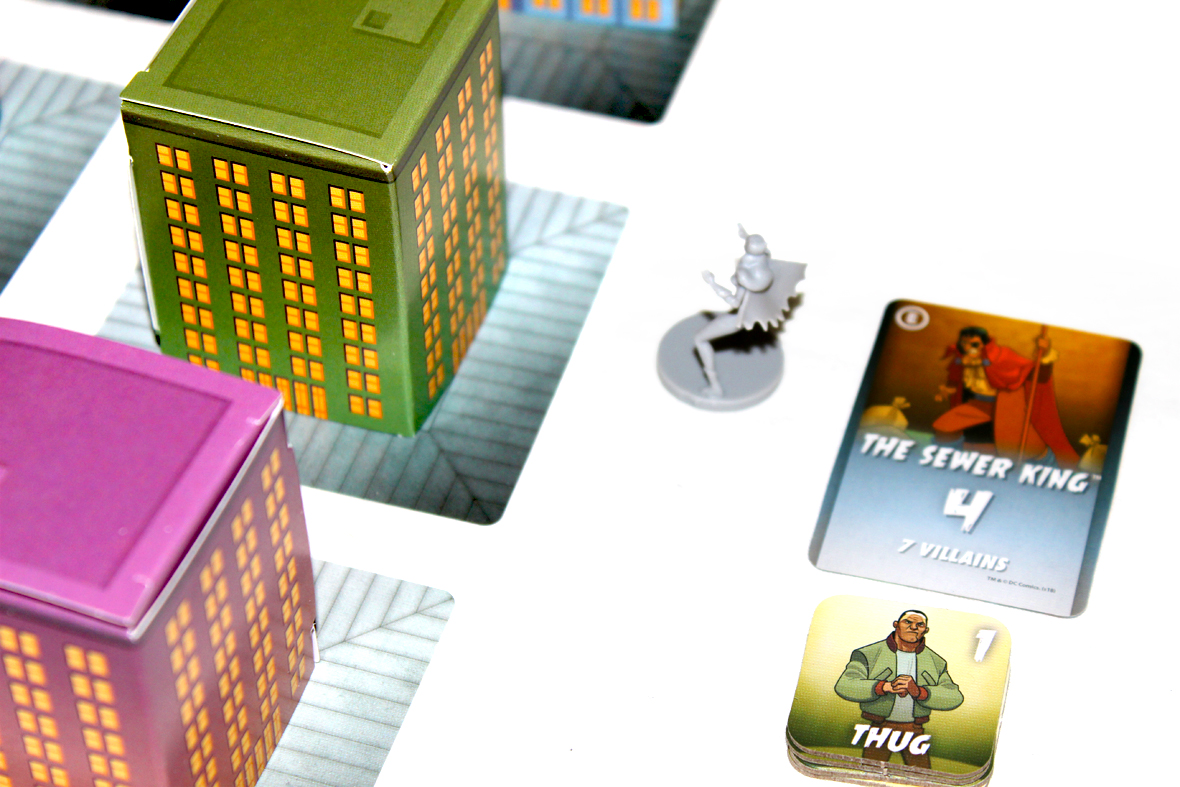 A game of Gotham City Under Siege is played over four Acts. Simply survive all four Acts, and you win! Naturally, that’s easier said than done. Let’s talk about the three phases in order, and ultimately how best to survive them and prevent Gotham City from going down in flames. 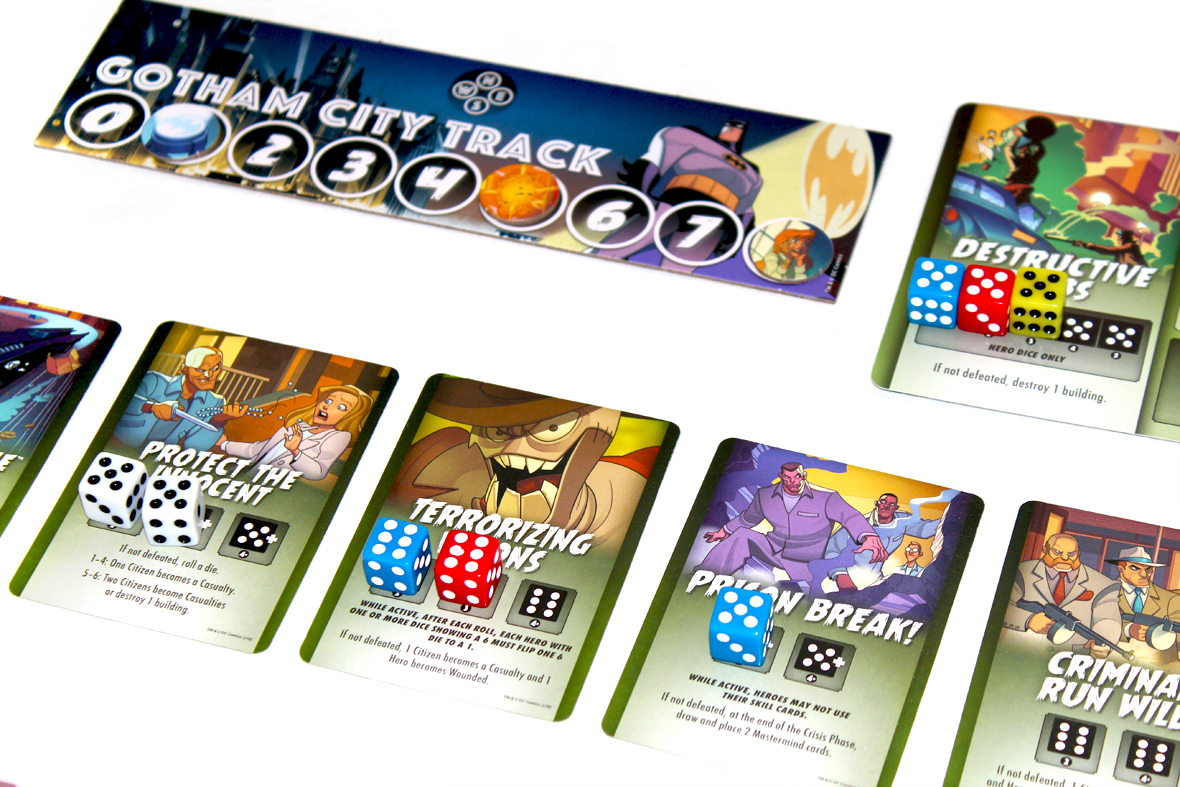 So, when you hit this phase (unless you’re just starting Act 1), you should return the Act Setup Cards and the Story Cards for that Act to the box and get out the relevant cards for the next Act. Then, pass the Act Leader token to the left.

Now, each player gets to plan a bit. Shuffle your Skill Cards deck, draw 2 Skill Cards, choose one, and play it face-up. Put the other one back on top of the deck.

Next up, reveal the Act Setup card for this phase. It’ll place some Villains, Story Cards, and Masterminds:

Some Story Cards have an Event for the Act Leader; resolve as needed. 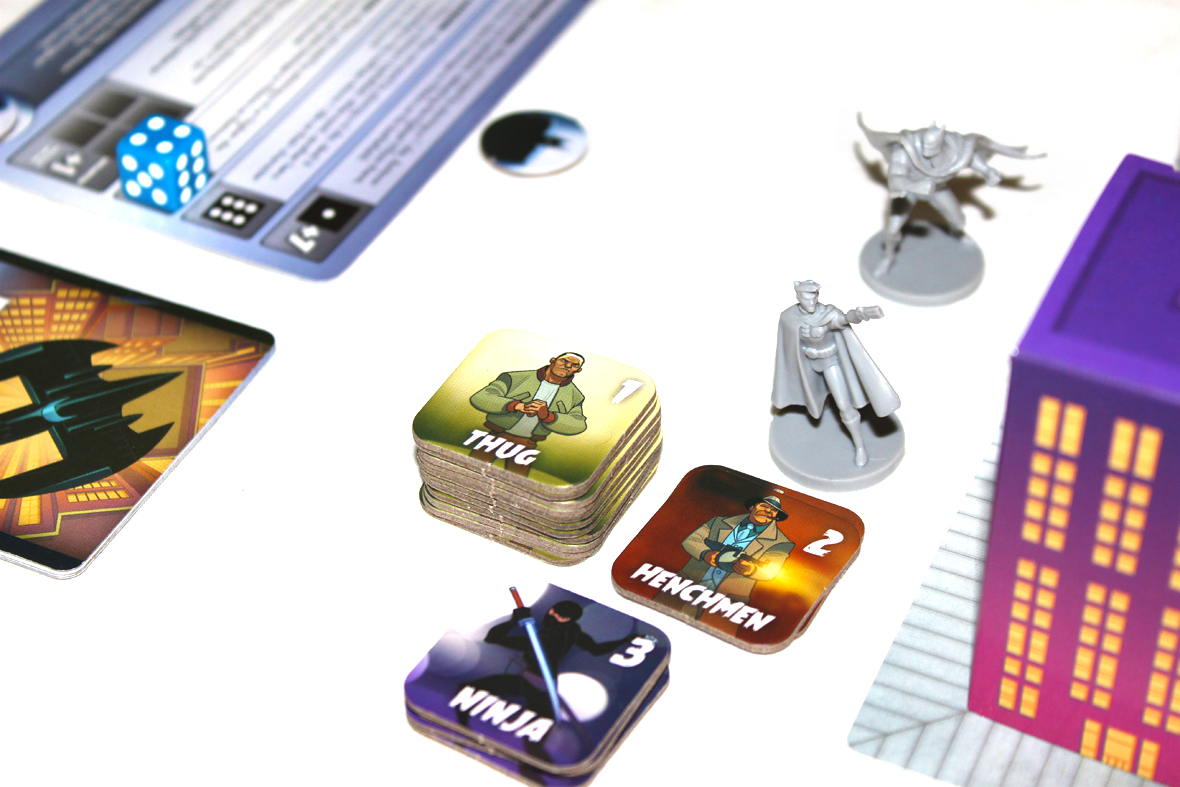 Now, Heroes get to act. This is played simultaneously over a series of rounds, where each player acts independently to try and resolve Story Cards and defeat Villains.

Start by rolling your dice; this may include Bonus Dice you were given, and that’s totally fine. The dice in your color are Hero Dice; the white dice are Bonus Dice. Note that certain Story Cards require Hero Dice to be completed. To use Dice on cards, you must obey the following rules:

Some cards let you attack Villains or Masterminds; to do so, you must deal Damage equal to their Rank (1 / 2 / 3 / 4 / 5+) in order to discard them. You may discard multiple Villains of multiple types in one attack.

If you don’t like your dice rolls, you may spend Bat-Signal points to increase or decrease the value by 1. Just, it’s a cooperative game, so make sure everyone agrees that that’s what you should be spending your money on.

If you want a boost, you may also use one of your 2 Skill Tokens after a die roll for a bonus ability. They’re hard (but not impossible) to recover, so be careful with those!

Once you’ve resolved everything regarding placing a die, you must roll your other dice again. Continue doing this until you have no dice left. Once every player has no dice left, move on to the Crisis Phase.

Now, everything goes to hell. Hope you did a good job being a hero!

If you didn’t defeat Story Cards, their penalties activate now. They might work as follows:

Then, the Villains attack! Each stack of Villains (by rank) and each distinct Mastermind will make a Destruction Roll. Again, it destroys a building if they roll a 1 / 3 / 5, but you might be able to stop them if you’re in their battlefield. When that happens, you attempt a Heroic Defense.

If you haven’t lost after this step, start the next Act! 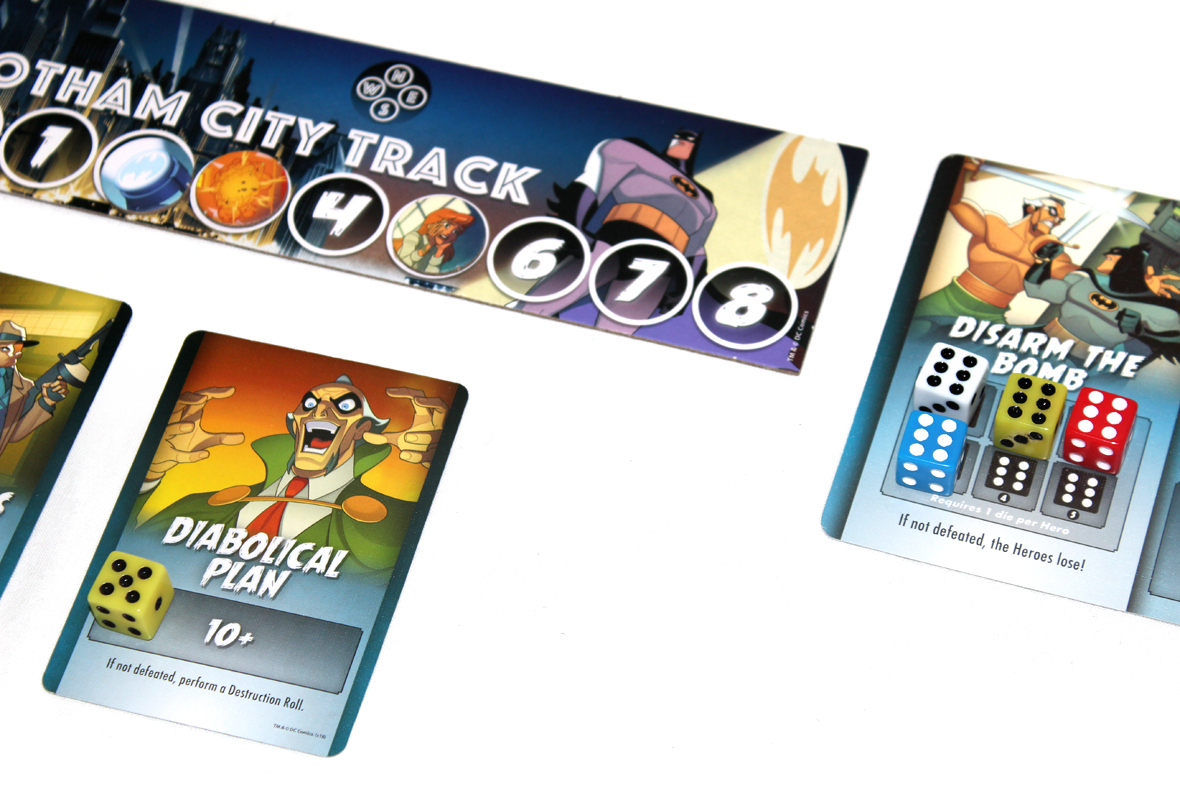 The game can end in the following ways:

Play until you hit one of those outcomes.

There aren’t really any, since you can play with any number (2+) of Heroes at any player count. It, like the Planet of the Apes, is fundamentally a play-by-committee cooperative game. That may be fine for some people and annoying for others, but it is what it is. Personally, I think three heroes is about the right balance for me regardless of player count; there isn’t too much going on for any one player to keep track of, but there’s enough variety to the heroes that we can pull through most of the issues that the game throws at us. That kind of limits the player count to <= 3, for me, but if you find that five players can effectively manage three characters or if you like larger, more chaotic games, more power to you. 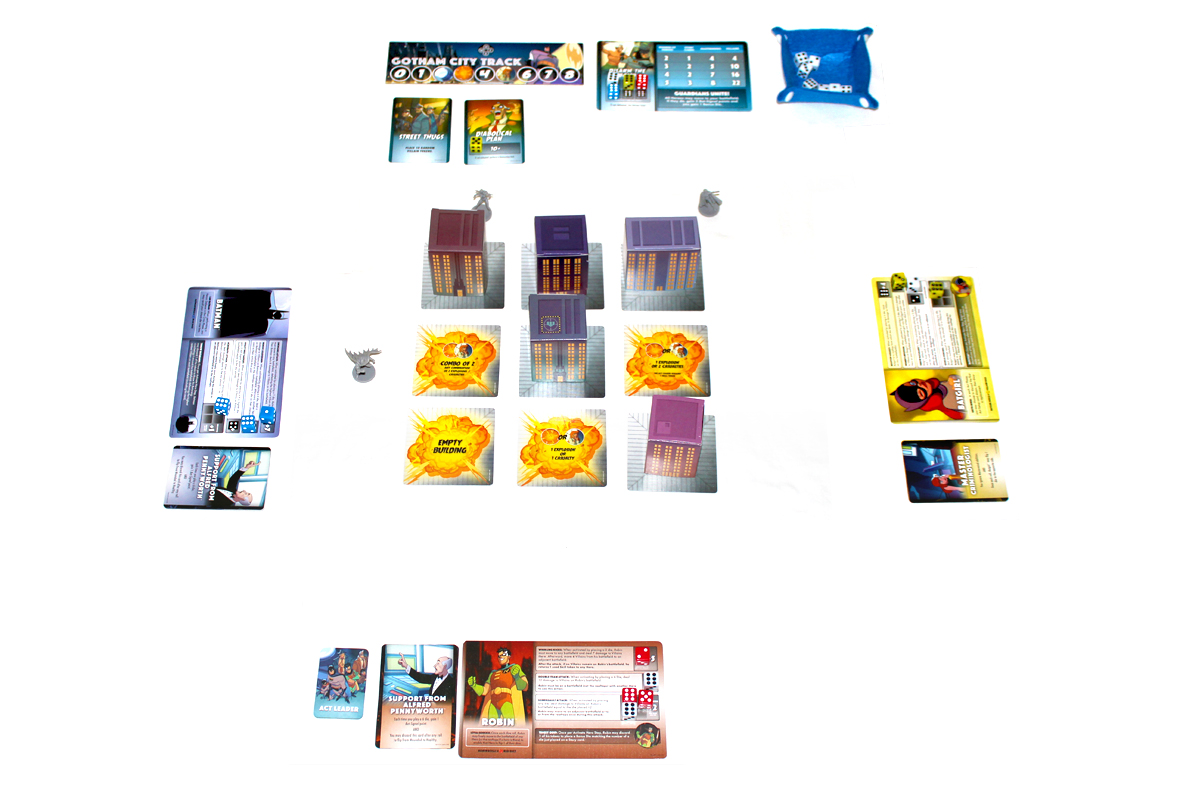 Overall, Batman: Gotham City Under Siege is pretty fun! I think there are a lot of things to like about it — a diverse array of characters; a neat 3D setup; lots of cards, powers, and abilities for variable play; fun throwbacks and references; and even some fantastic minis. Those are all great things to put in a game you’re developing, and I’m super glad IDW has paid such attention to the license (though I’ve never found them to fall short in that area; I suppose that’s why they’re such good stewards for those licenses). The game itself isn’t my favorite cooperative game, yeah, but it’s occasionally fun to play. I think I’d prefer a shorter game with a more streamlined setup and gameplay process; I worry that this review is going to clock in at around 3000 words, and for a 45 – 60 minute game, that makes me think either I’m being too wordy (I am) or that the game has too much going on for its length. Or it could be both things. That’s not the worst thing in the world, though, as I think this game is a love letter to Batman: The Animated Series, which admittedly I haven’t seen much of (I was more of a Justice League / JLU kid), so fans of that will certainly feel seen by the game; I just think I wish it were a bit shorter. If that’s not something you’re concerned about or if Batman: The Animated Series was your favorite Batman media, I’d recommend checking out Batman: Gotham City Under Siege; it’s an interesting game and I’ve had fun playing it!