Full disclosure: A review copy of Sailblazer was provided by Nice Game Publishing.

It’s always exciting when you hit the end of a run. This run is the latest box of games sent via Nice Game Publishing on behalf of various publishers. We talked about The Bark Side, DIG IT UP, and Sheep Dog, so let’s finish up with Sailblazer! This is a larger game than the others, so this review might be a bit longer; please bear with me.

In Sailblazer, you’re seeking your fortune on the open seas! That said, it’s also the Golden Age of Piracy, so, you picked a kind of mediocre time to seek your fortune on said open seas. You were never much for timing. You’re motivated by your own personal journey, though, and you’ll hire sailors, buy some cannons, and drink a surprisingly reasonable amount of rum to get to where you want to be. The problem is, you’re not alone in your endeavor; your opponents will stop at nothing to live out their dreams on the high seas, as well. Will you be able to find your way on the ocean? Or will your opponents out-swashbuckle you?

Start by placing the Saffron Island tile in the center of the table / play area: 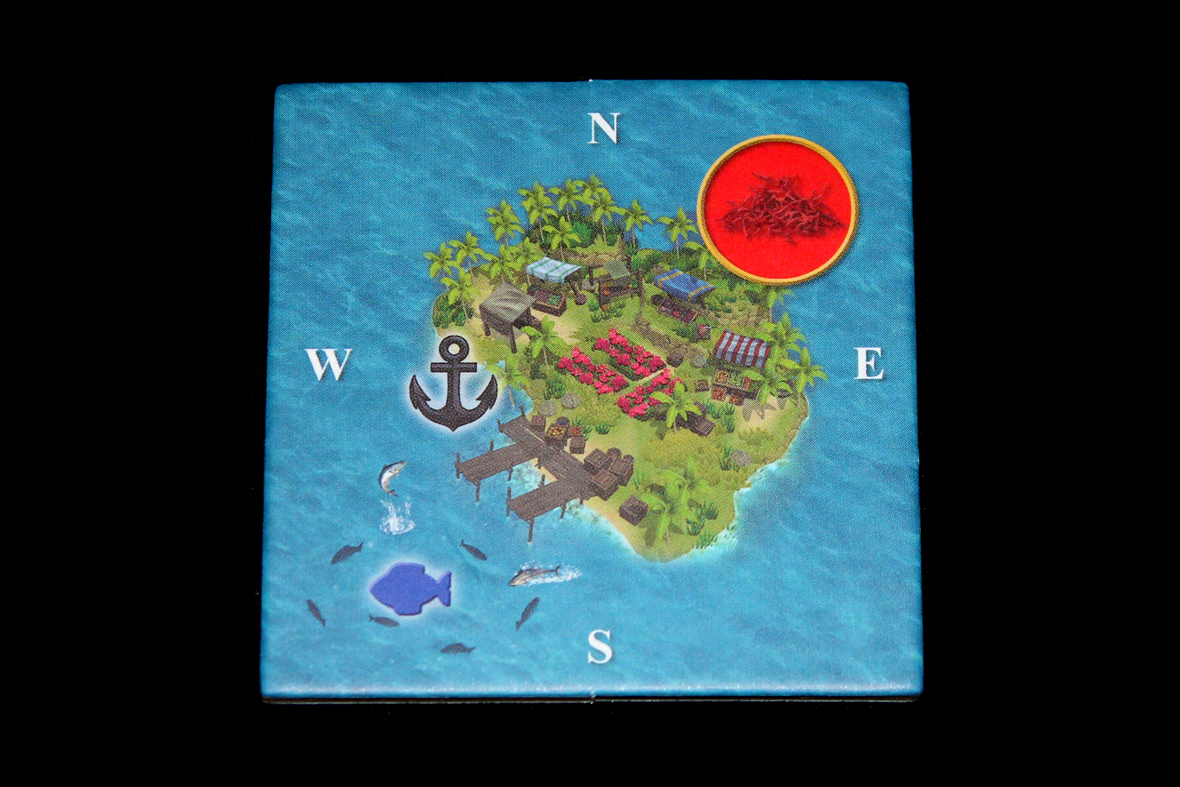 You’re going to want to organize the other tiles: 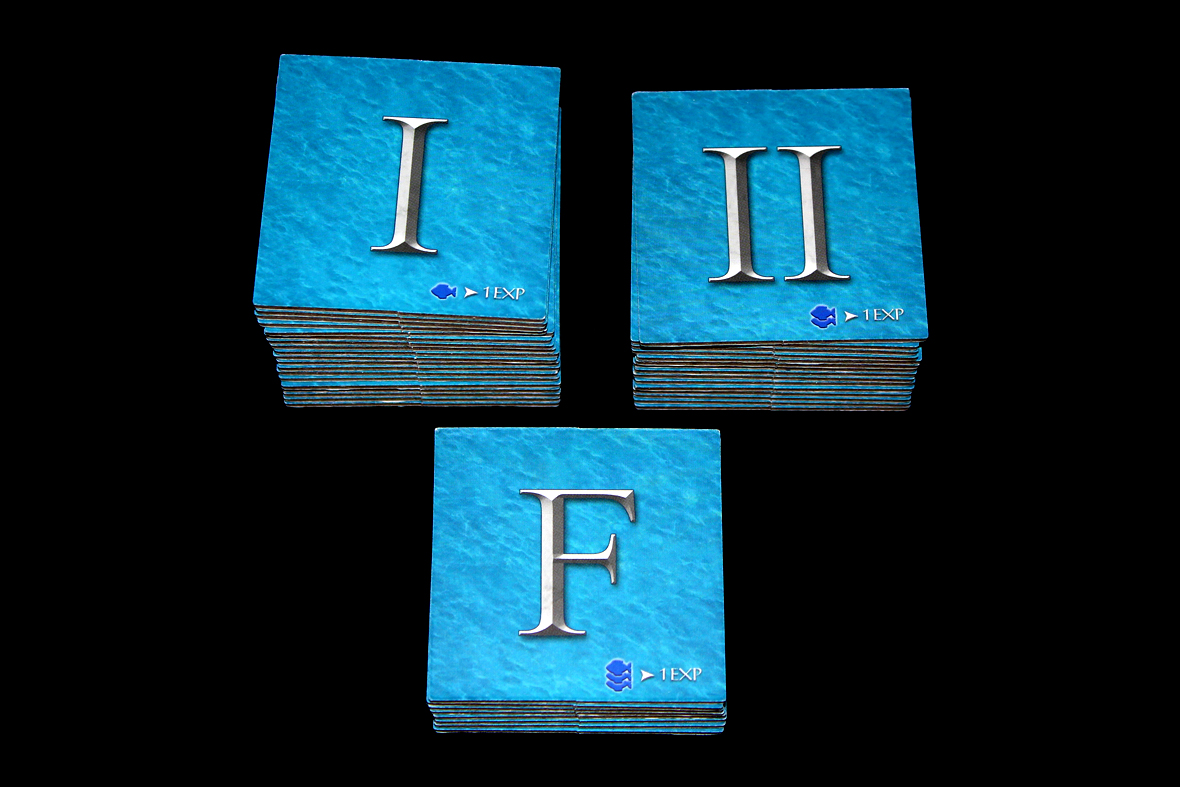 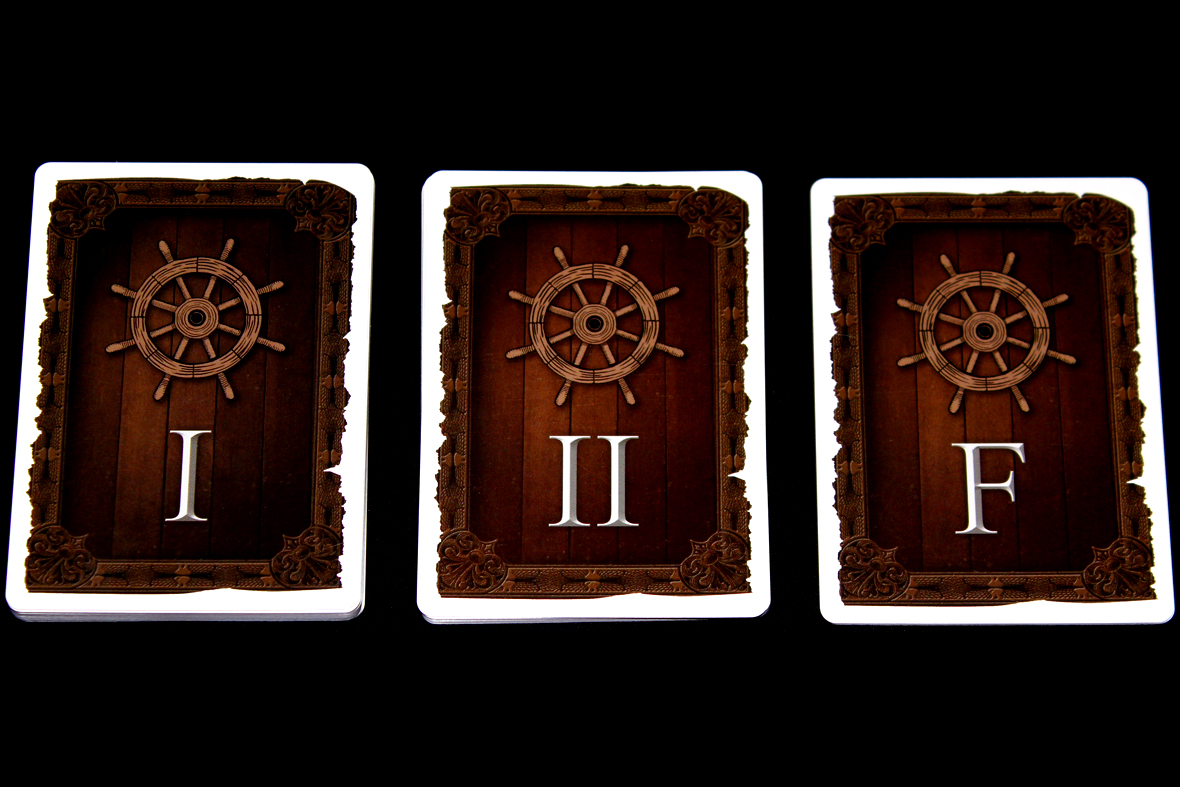 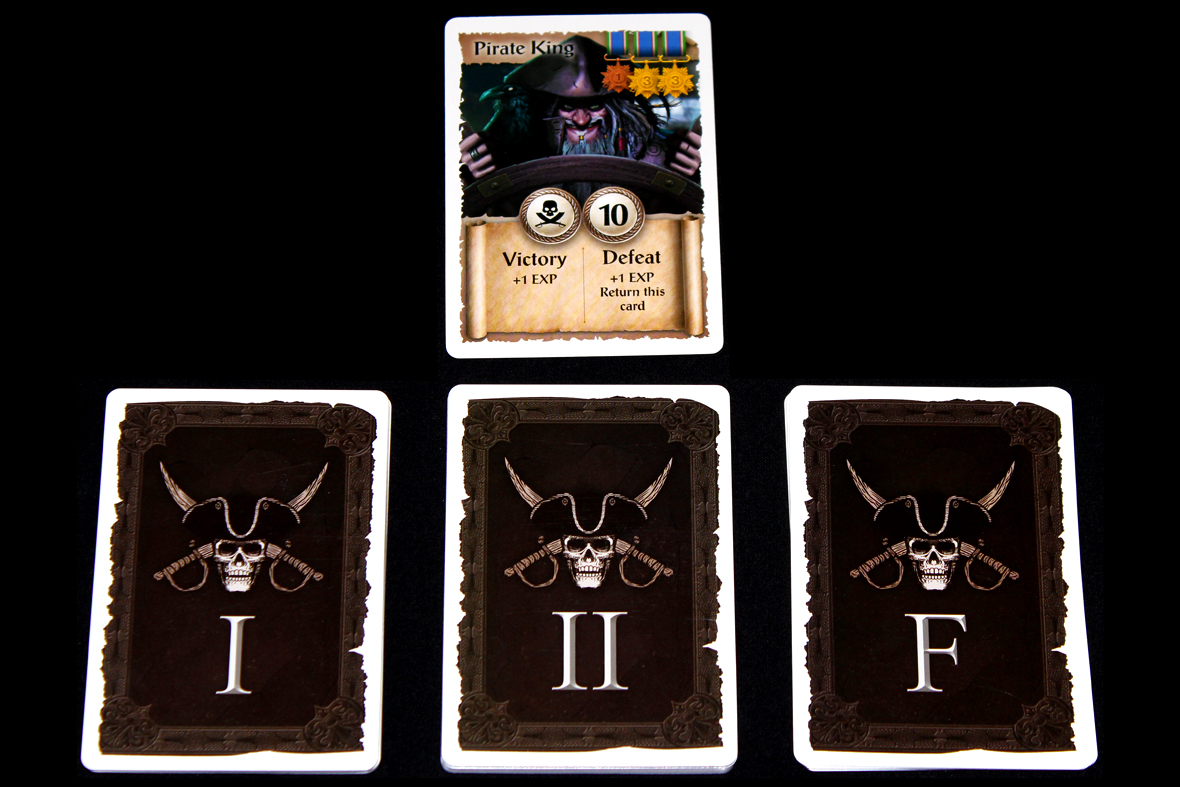 And the Reward cards:

Into their stages: 1, 2, and Final. Remove all the 3 / 4 labelled tiles if you’re only playing a two-player game. For the 1 and 2 Stage tiles, there are three end stage tiles (I -> II and II -> F); remove those and shuffle them up with two of the other tiles of that stage. Put that set of five tiles on the bottom of each stage’s shuffled stack. For the final stage, shuffle all 8 tiles normally.

Set the Final Achievements nearby: 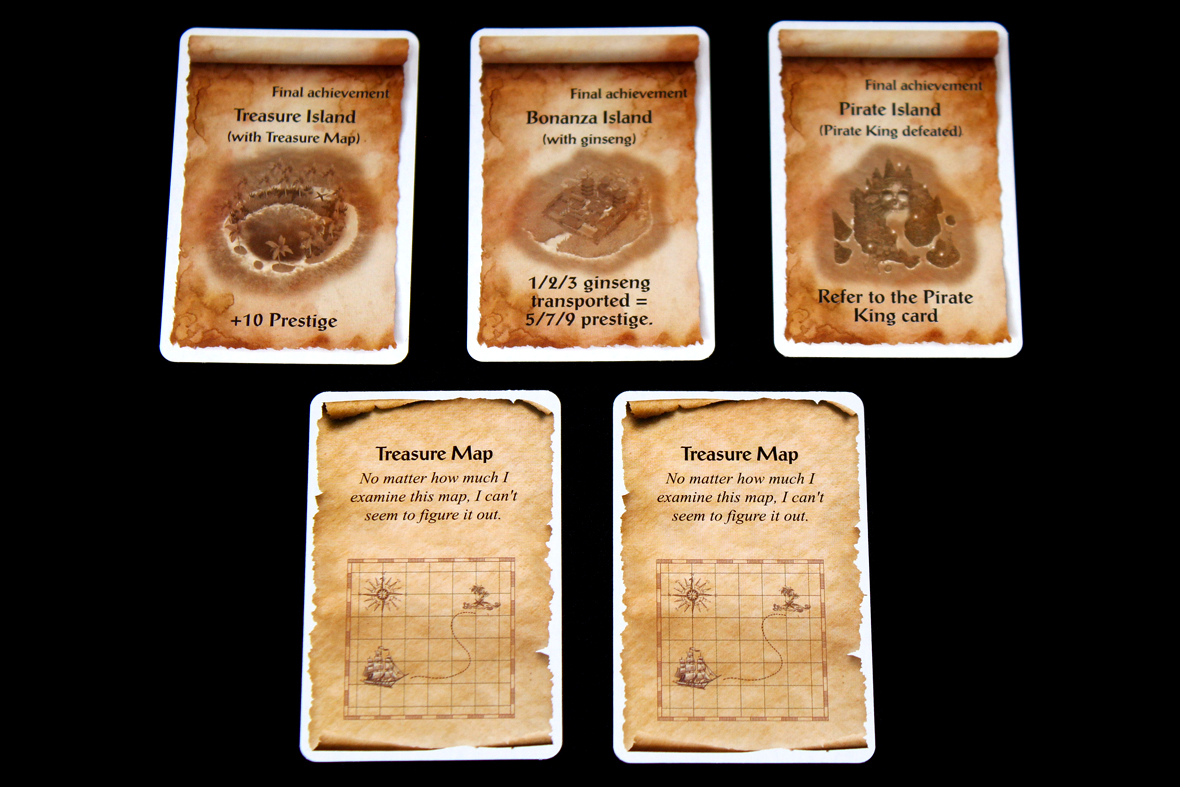 You can place the Pirate King card next to his Achievement. Give every player a player board:

Have them place their ship on Saffron Island: 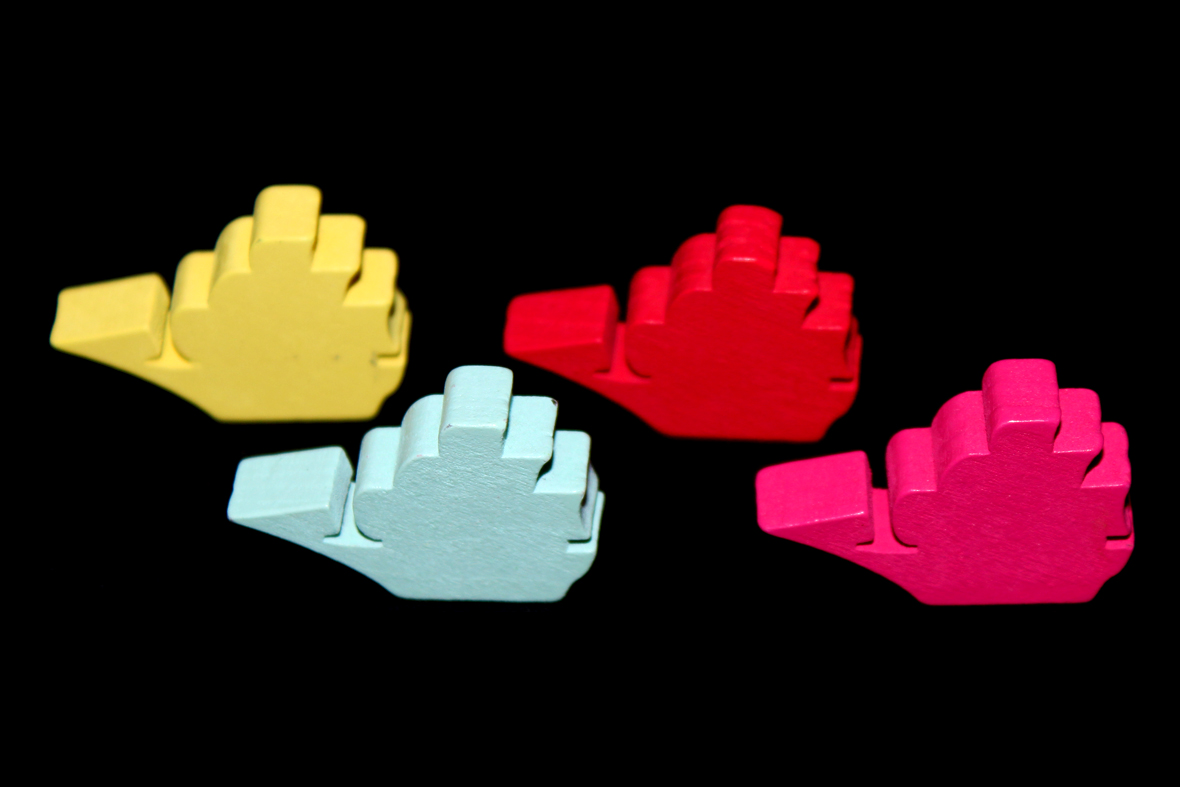 Take your player markers. Place one on each cannon space on your board, one on two of the three storeroom spaces, and one on the XP track (the 0) at the top of the board. Set the others aside:

Give each player two rum tokens to start:

Give each player one Saffron, setting the other resource tokens aside:

got a few Prestige Tokens in there, whoops

Give each player fish:

Set aside the sailor tokens:

I kind of thought they were fish, at first. You can see it. Also set aside the Loot Tokens: 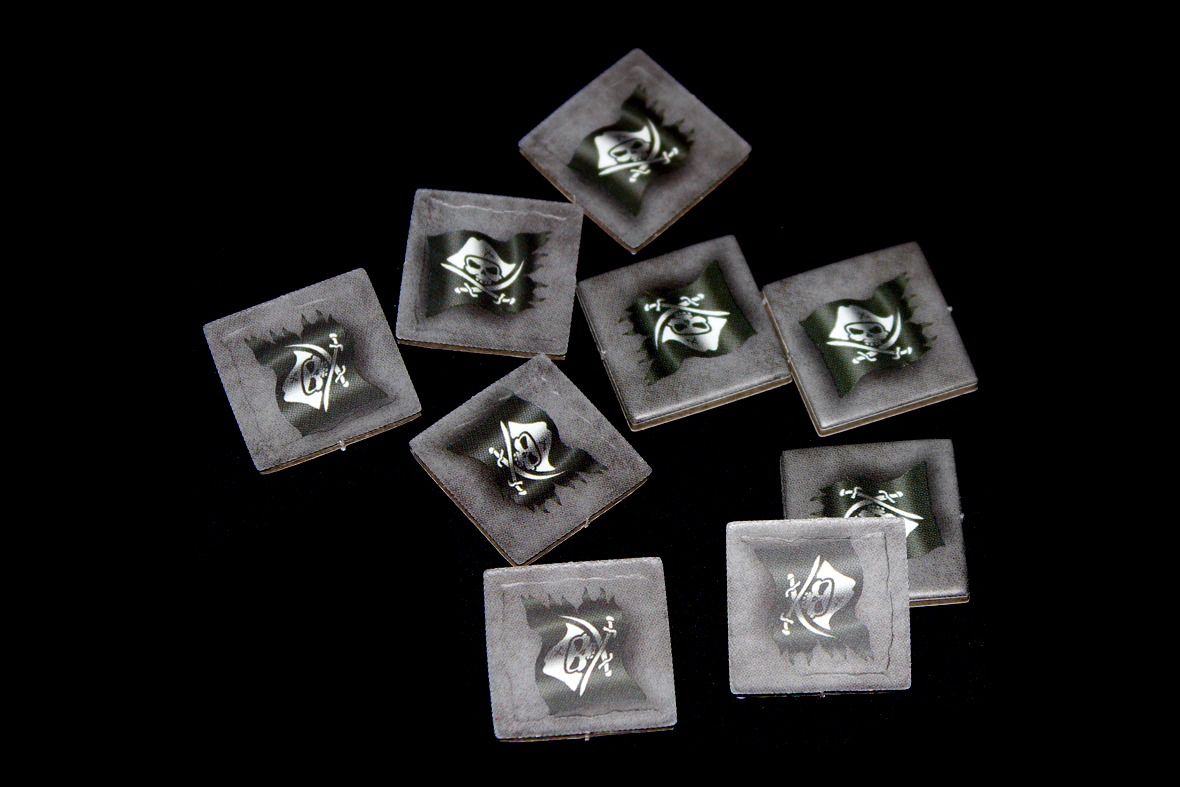 And the Prestige tokens:

Set the dice aside as well:

Give each player a Prologue card, setting aside the other Story Cards until needed: 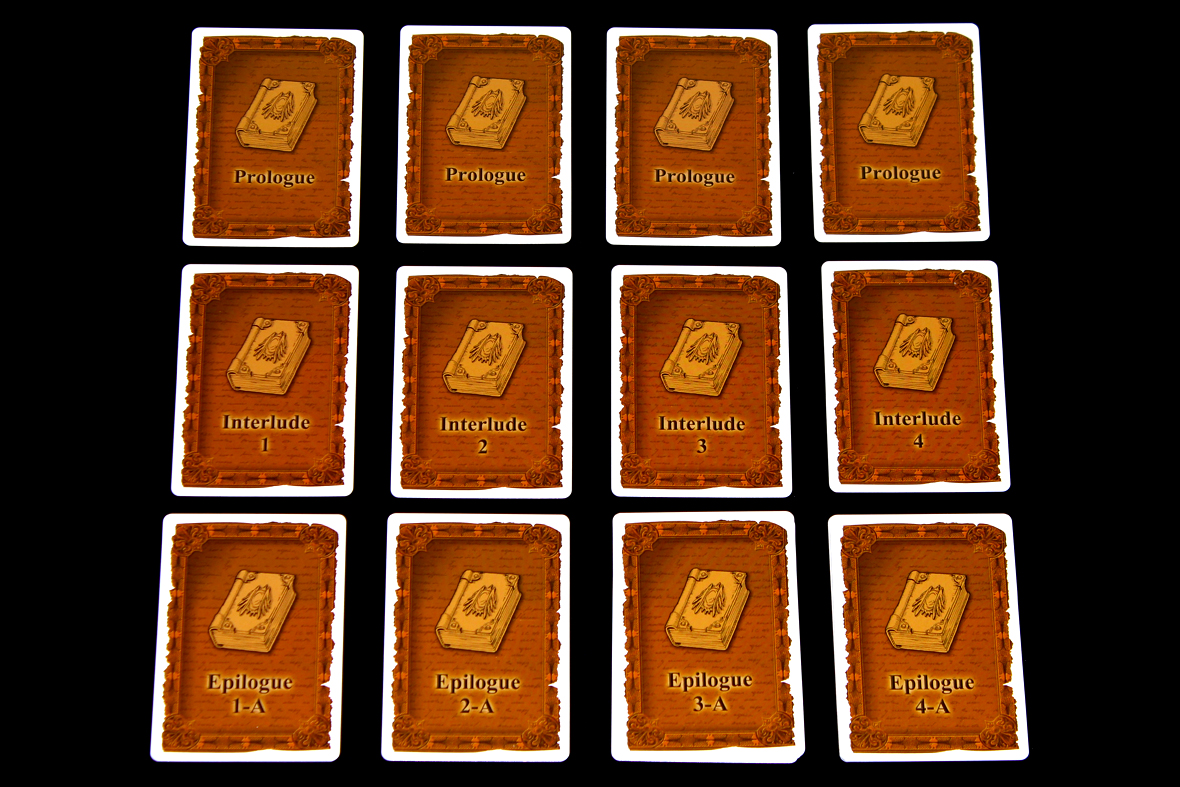 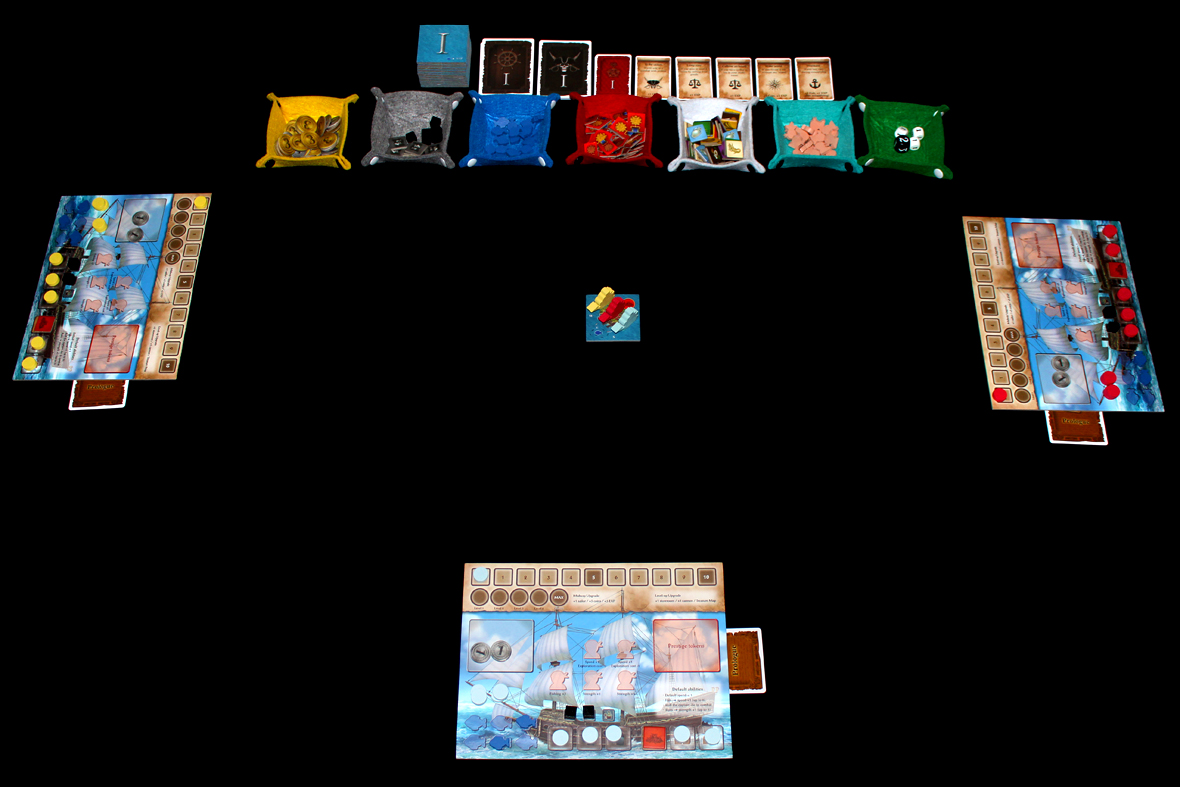 The game takes place over three stages, as players attempt to fulfill their destinies and become masters of the open ocean. Every stage comes with its own setup, so before a stage (including Stage 1), you’ll want to set out the tiles, pirate cards, and log cards next to each other, face-down. Reveal 5 Reward Cards for the current phase, as well.

Players will move, and then act, on their turns.

For movement, you may choose three options.

If you choose to explore, you forge ahead off of the edge of the tile you’re on, currently, into uncharted(ish) waters. Pay the cost in fish, draw the tile, gain 1 EXP, and move your ship onto the tile.

If the tile has a Prestige Token icon on it, you immediately gain that Prestige as well. Similarly, if a card as a Pirate symbol on it, you must immediately fight the Pirate. Draw the top card of the Pirate deck. If it’s an encounter, you must roll the Captain’s Die (along with any Cannon dice you’ve unlocked) to defeat it. Your sailors may give you extra strength, and you can discard rum for +1 strength per rum discarded. If your total strength meets or exceeds theirs, you win! If not, you may take penalties. If you gain loot, it must be stored in your storeroom (if you have room) and taken to a port. Any Prestige you gain from the card comes at the end of the game.

To sail, move to any adjacent ocean tile that’s already been revealed. Your default speed is 1 tile, but you may expend fish or assign sailors in order to move one extra space per thing used. Other players’ boats don’t affect you, in case you were wondering.

If you stay, you don’t move. Makes sense.

Over the course of these explorations, you may gain enough EXP to hit 5 or 10. When you hit those spots, you gain a reward:

Also, as you do things during either phase, you may fulfill requirements on Rewards Cards. You may take up to two per turn, but they do not replenish until the next player’s turn. Taking them is a free action.

Now, the Action Phase occurs! You may take one action.

Some spaces have Log Card symbols on them. You may draw one and resolve it; that’s a useful way to gain EXP, especially if you don’t want to fight Pirates. That said, you can only draw a Log Card if you explored, this turn. So you may have to risk the Pirates anyways. These are mostly good. But not always!

This one’s interesting. If you’re on a space that produces a resource (pictured), you may buy it for 1 coin, regardless of what it is.

Selling, however, is more complicated. You cannot sell a resource on a space that generates one. If you explored, you may always sell at maximum price:

If not, you have to sell it for a number of coins equal to your distance (orthogonally) from the closest place that sells it. If there is no tile that sells this resource (which can happen), you may sell it for maximum price. Note that you can never sell a good for more than its maximum price; that’s why it’s the maximum.

Resupply the Ship at a Port

If you’re on a port space (has an anchor), you may resupply. This lets you do several things:

You can do any and all of these things with one action as many times as you want / are able to.

Work at a Port

If you’re on a port space (has an anchor), you may gain 1 coin. I never said working at a port paid well.

Take the number of fish pictured on the tile. That’s all.

If a player reveals a tile with an End Stage icon, the stage immediately ends. Reset it according to the instructions I gave earlier. 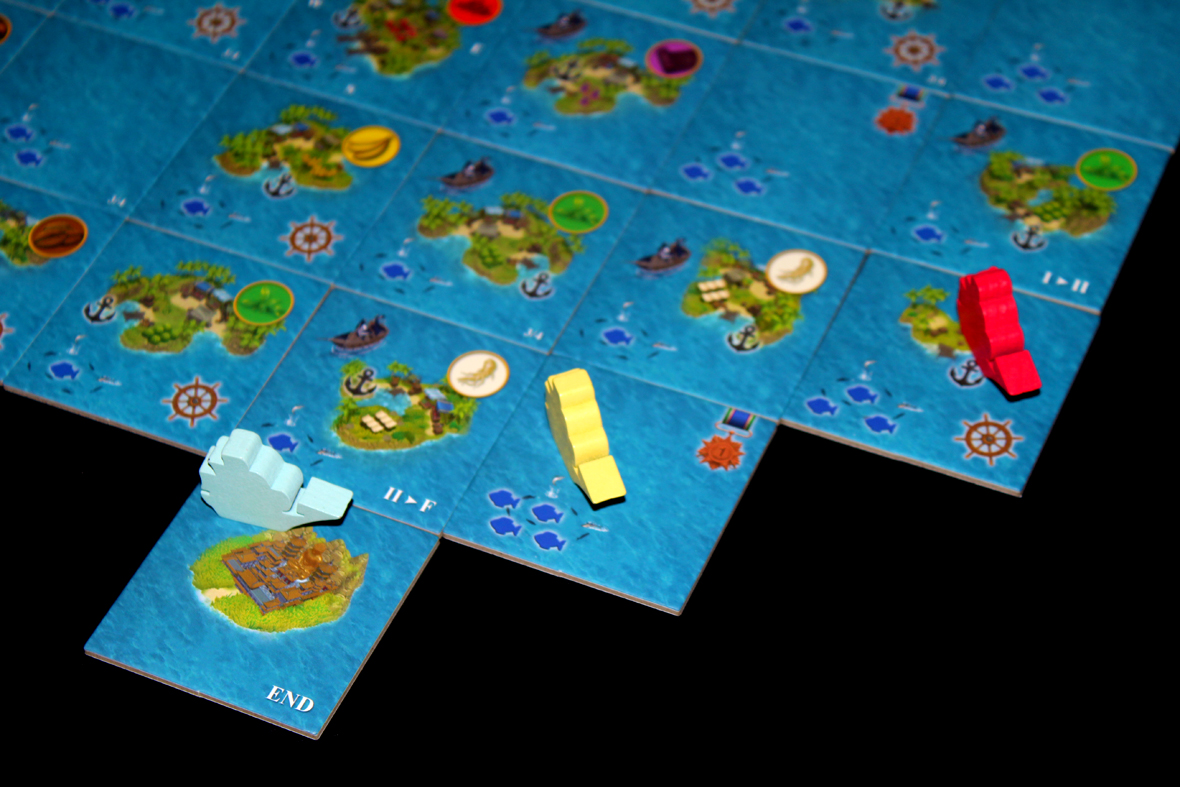 If a player reveals one of the Final Tiles (Bonanza Island / Treasure Island / Pirate Island), the game ends after every other player takes one more turn. Those three tiles will give you special bonuses if you fulfill their requirements, though, so they’re worth visiting. Either way, once you’ve ended the game, calculate your score:

Not really major ones. There’s a lot more exploring happening at higher player counts just by virtue of there being more players, which just means you’ll get fewer turns per phase, generally. You’ll probably see higher scores at 2 or 3 players as a result, but there’s nothing that really makes it that big of a change at higher player counts (other than just having more players in your way).

No particular player count recommendation for this one, either.

Overall, Sailblazer is interesting! I think my current complaint about it is that it’s not quite sure what kind of game it wants to be. On one hand, it’s definitely an Age of Exploration game. Build up your ship, explore around, discover new islands, fight pirates; you can do it all in this. On the other, it’s really got a bit of the humorous soul of a storytelling game, but it almost feels like it was afraid to commit fully to that. As a result, it occupies two pretty disjoint spaces, and the players can kinda feel that indecision in a lot of parts of the game. The game’s a bit heavy on luck, the rich get richer, and trading isn’t really fleshed out to the level I’d want it to be. The thing is, games like Betrayal have those problems, too, but they’ve fully committed to being An Experience, so die-hard fans are more willing to dismiss some of their holes in favor of their narratives. Sailblazer has the beginnings of that, but I would absolutely love to see more work developed on that side. The core gameplay is there and it’s fun; it just could use some tweaks to make it feel a bit less variable (or some additional weight on the Story Cards so that the variability feels like it’s in pursuit of a story). Either way, I thought it was a cute game, so I’m hoping to see an expansion or something for it so that I’d be able to get it back to the table. In the meantime, if you’re looking for some adventure on the high seas and don’t mind a bit of luck, Sailblazer might be worth checking out! It’s interesting.