Full disclosure: A preview copy of Tumble Town was provided by Weird Giraffe Games. Some art, gameplay, or other aspects of the game may change between this preview and the fulfillment of the Kickstarter, should it fund, as this is a preview of a currently unreleased game.

Still giving away a copy of Dale of Merchants Collection to a lucky reader in the US (or with a US mailing address) thanks to Snowdale Design. For more information on that giveaway, check out this link!

Another Kickstarter preview! I keep saying I’m going to stop, and I never do, because I love them. Mostly. Sometimes. Who can say. Either way, there’s more this week, more next week, and likely even more after that! Something to look forward to, if I weren’t already behind (writing reviews on Thursday for a Monday launch isn’t my best look). Weird Giraffe Games is our latest publisher with a Kickstarter, so let’s see what they’ve got going on in Tumble Town, the latest from Kevin Russ, designer of Calico!

In Tumble Town, you’d normally say that this town isn’t big enough for the 2 – 4 of us, but it, in fact, is totally equipped to accommodate you all! The problem is that they want one of you to be mayor. Rather than having a fair election (they’re kind of out of vogue, I hear), they’ve decided to task you with local development, and if you do a good enough job, they’ll make you the mayor! It’s a bit like Animal Crossing in that you’re doing local development but you do all the work. Naturally, your opponents have their eyes set on municipal power, as well, so you’re going to have to be quick-witted (and a bit lucky) if you want to seize power in this town. Will you be able to construct the best Western … town?

Game’s not too bad to set up. Set out the dice: 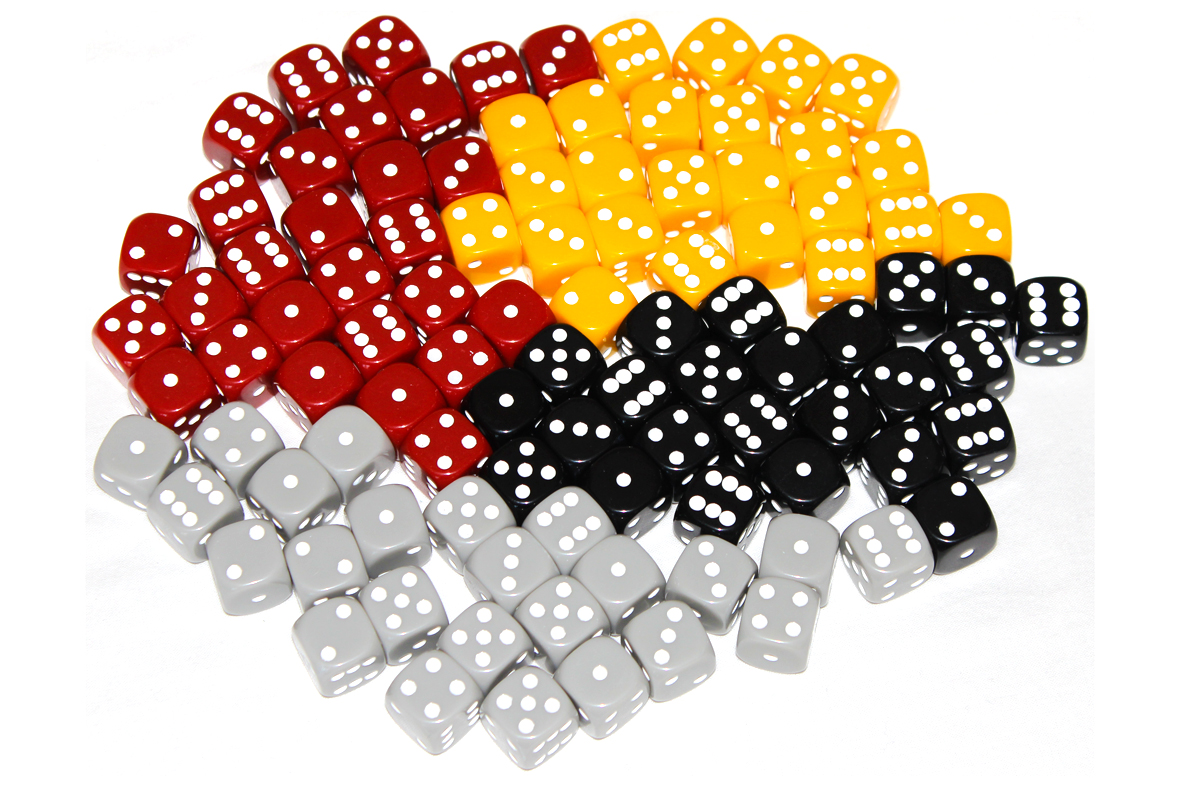 You’ll want to put a certain amount of each back in the box based on how many players you’ve got:

Give each player a random set of starting cards: 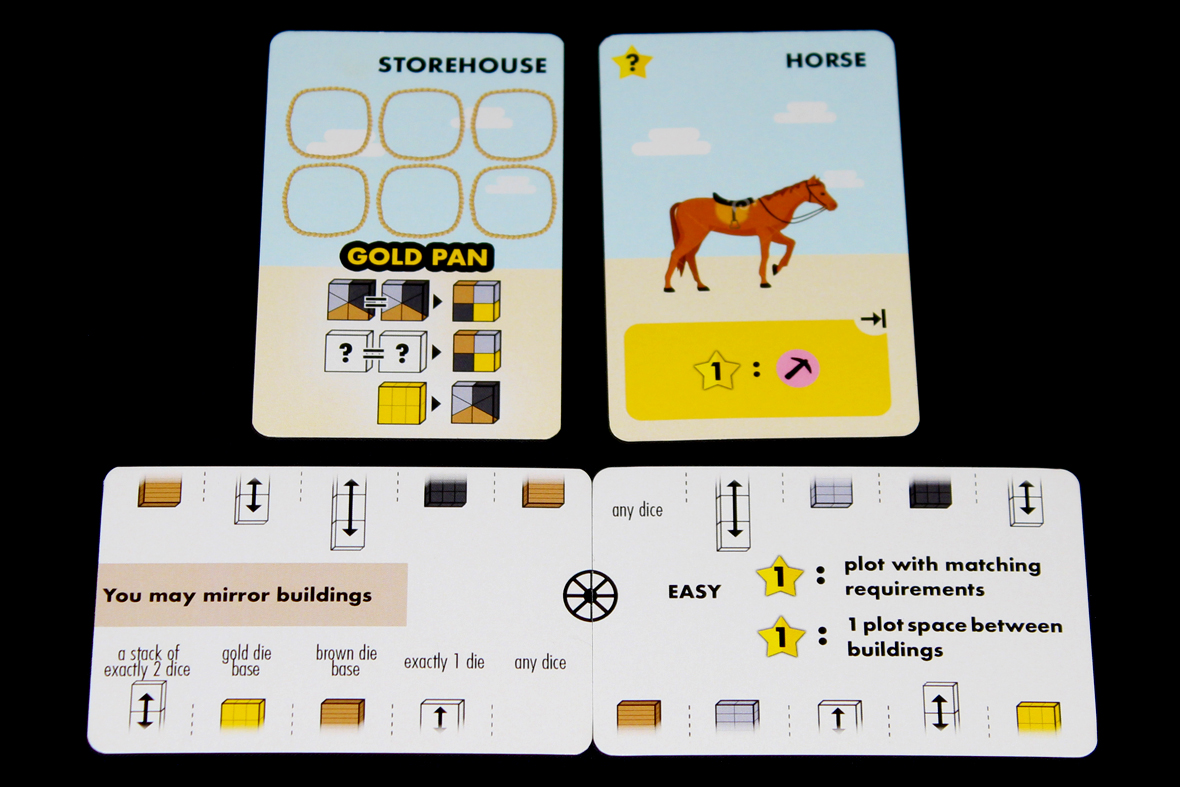 These should include a Horse with a gold scoring condition on one side, as well as Main Street Cards with Easy and Hard Mode:

Have all players play on the same side of Main Street, and join the cards together such that the icon is complete and between them. Set aside the tokens:

Prepare the Building Plan Cards by shuffling each deck:

And placing the three decks (sorted by the number of cacti on the back of the cards) on top of the Rainbow Cards:

Now, you’ll remove some of these cards, as well, leaving a certain number of each type:

Then, reveal four cards from each deck. Finally, give each player their starting dice:

If you have a dice tower, set it out: 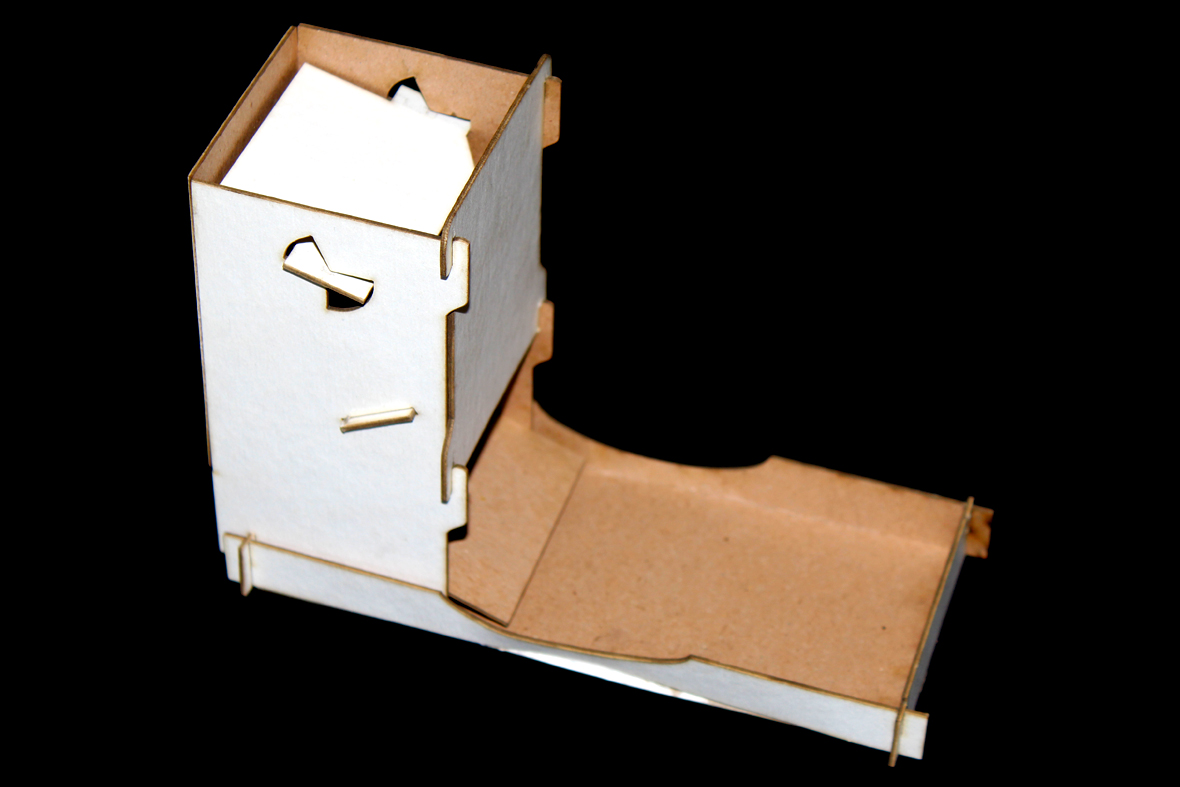 Roll the dice, because why not? And then add them to your Storehouse. Either way, you’re ready to start! 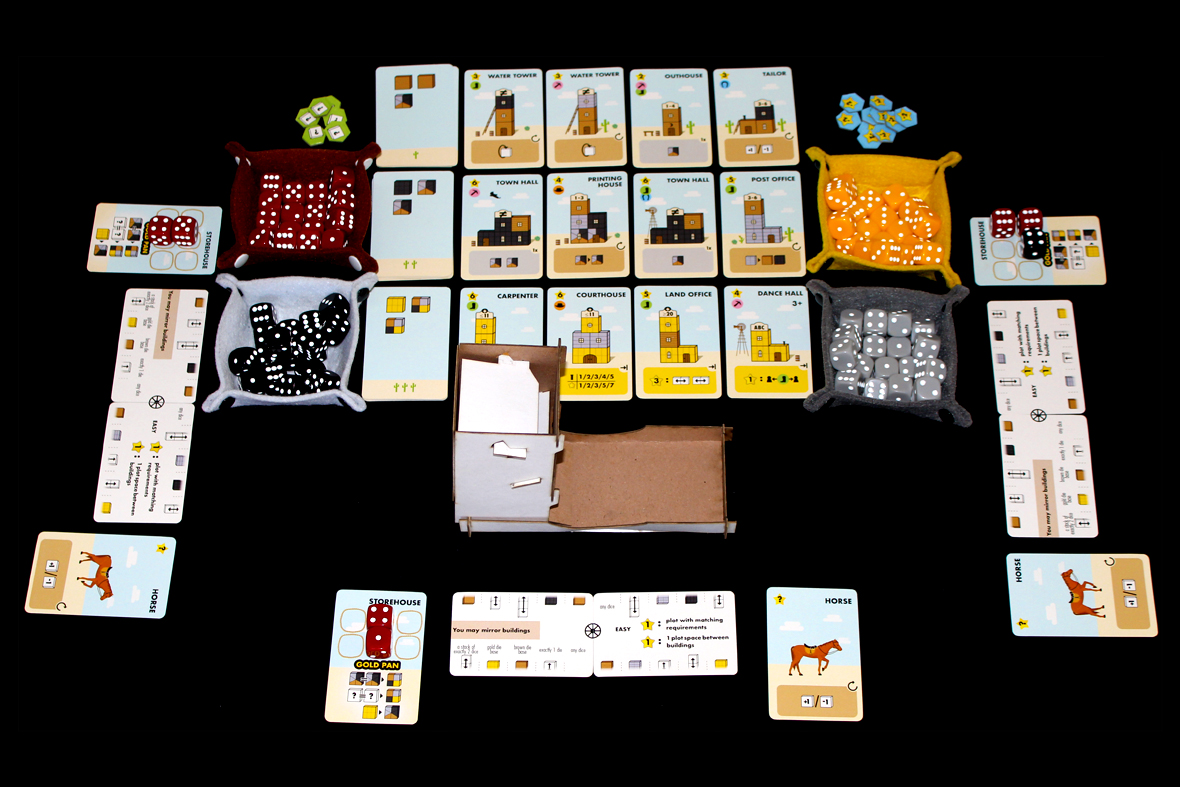 A game of Tumble Town takes place over several rounds, as players compete to build up their own Main Streets to prove that they deserve to be the new mayor. Once the game ends, the player with the most points wins!

To start your turn, take a card from the Building Plan area and add it to the left of your Horse. These will be your incomplete buildings. Next, claim the dice indicated on the back of the top card of the row you just took the Plan Card from. Take those dice and the dice in your Storehouse and roll them. Now, you may Construct and use your Building Powers.

When you Construct, you must follow the requirements on the card you’re trying to build, and you may only build cards that are in your incomplete Building area. Some cards want dice with certain values, some want straights or sets or all different values or certain colors; doesn’t matter. Certain cards, once completed, will give you the ability to reroll or modify your dice; you may use the ability as soon as the card is completed. Other cards have scoring abilities or one-time bonuses, so, those are less useful in the moment.

If you’ve got dice in the configuration the building has asked for, assemble them as pictured on the card (vertically, mind you, like a real building) and add them to a spot on your Main Street. Note that Main Street gives you bonus points for meeting a space’s requirement. You can place on that spot without fulfilling the requirement; you just won’t get any points.

If you want, you may ignore a requirement for a die when building a building. If you do, for each requirement (color or value) you ignore per die, you take a -2 token as a penalty. Place it on the card so that you don’t forget. 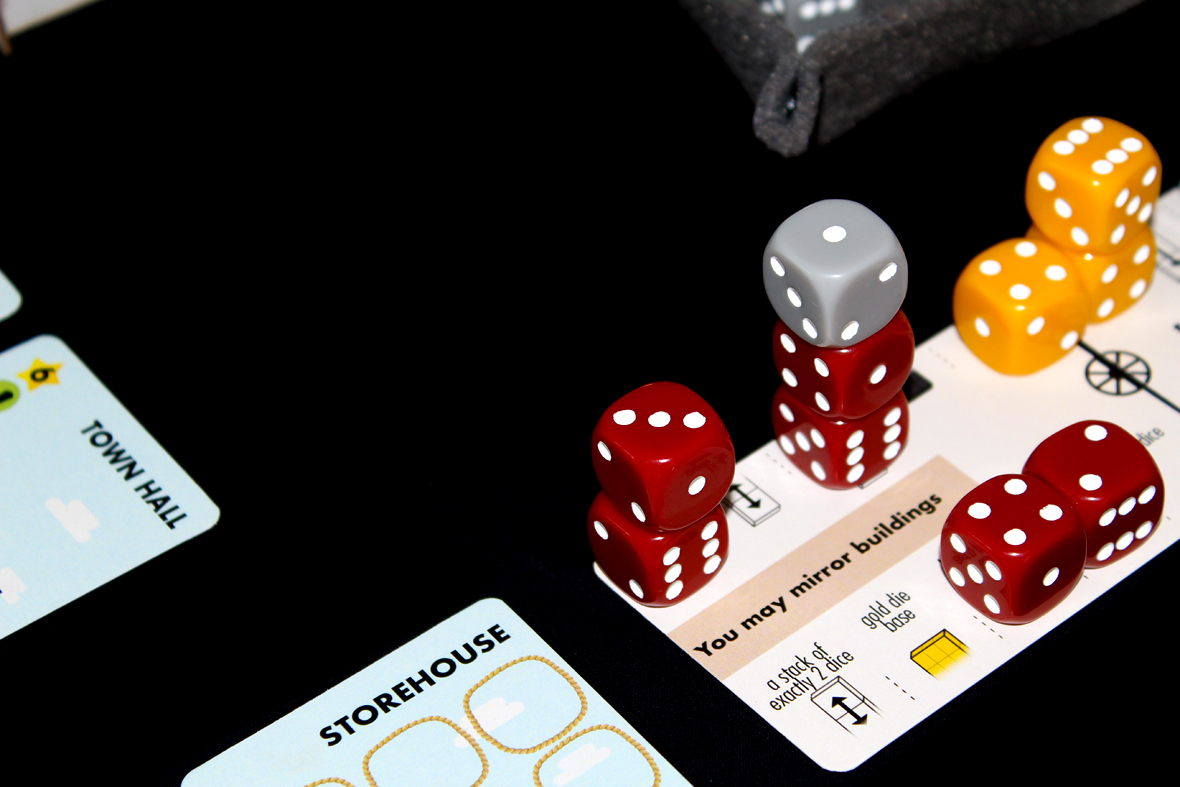 Ultimately, you may only keep one die on each space in your Storehouse between turns. You must return the extras to the Supply or exchange them according to the exchange rules. Up to you. Either way, reveal a card from the top of the row’s deck to replace the one you claimed at the start of your turn to end your turn. The next player goes immediately after.

The game ends when any two dice colors have two or fewer dice left. Finish the round, so that all players get an equal number of turns, then add up your scores, including points from buildings, building abilities, Main Street, Main Street bonuses, and penalties. The player with the most points wins!

This isn’t a particularly destructive game, so, you likely won’t notice other players beyond seeing how quickly players power through dice at higher player counts. Higher player counts make it a bit more difficult to plan, since you likely won’t be able to guarantee quite as many cards in the Building Plan area will stay the same between rounds. That said, each player can only take one card per turn, so, out of 12 cards, 9 of them will be there on your next turn pretty much no matter what (unless there aren’t enough cards in the deck to replenish) at even the highest player count, so this isn’t exactly what I would call a problem. The only major difference, then, is that Dance Hall cannot be used at two players, so you’ll need to comb through the deck and remove it. Despite the game not having a ton for players to do when it’s not their turn, I don’t actually notice turns taking all that long, so it doesn’t feel terribly long as a result. I have a gentle preference for the lower end of the player count spectrum, but that’s a very, very slight preference. 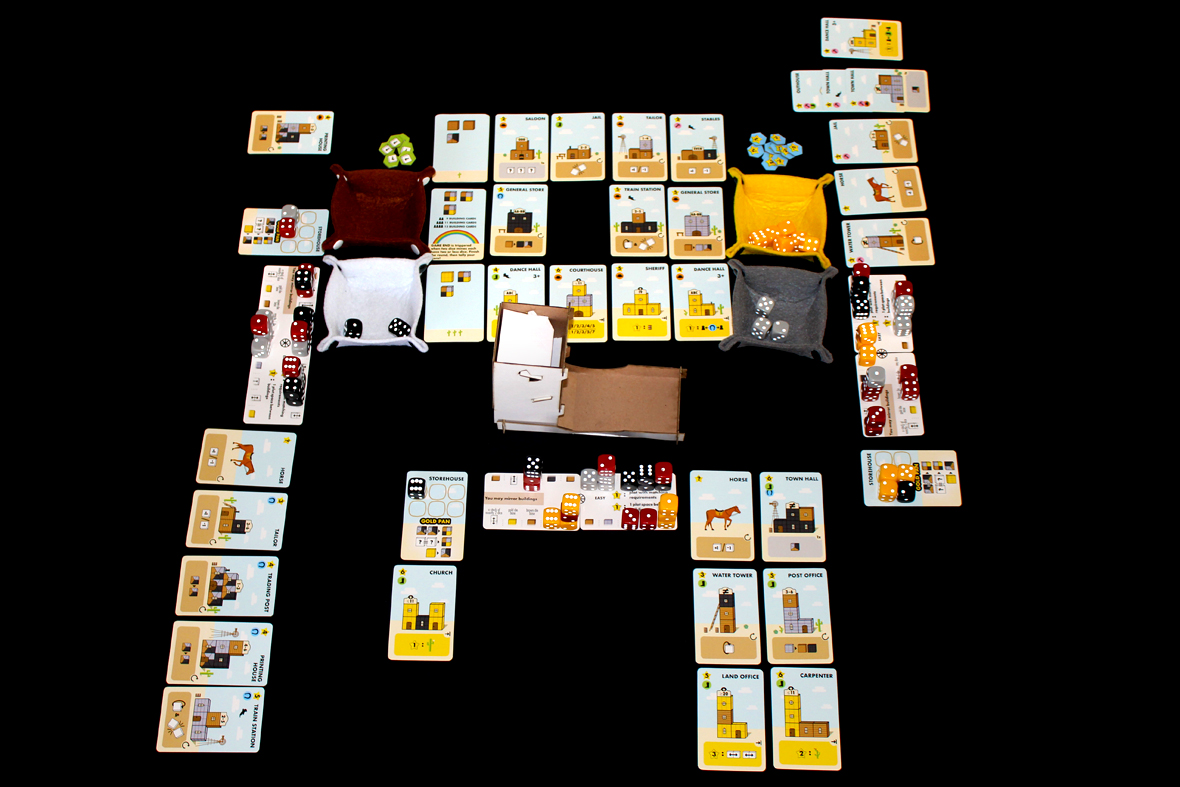 Overall, I’m pretty pleased with Tumble Town! I think, from the start, I was always going to be a bit fond of a game with a stackable dice mechanic (though I worry about having so many of them without some sort of scaffold to hold them in place; one table bump and you’re left with a ghost town). I particularly like that you have to go for simple sets and some dice manipulation to get the dice where you want them to be. It reminds me a bit of Intrepid, in that the dice are more of a means to an end than an actual determining factor (or, even more specifically, they should be if you’re playing well). I think, functionally, dice are going to turn a few players off of this game. After all, dice are fundamentally the emissaries of luck, and luck and strategy can’t coexist! But similarly to Intrepid (I’ll cover it … later), if you’re playing Tumble Town well, you’ll find that the dice aren’t really limiting anything; they’re just forcing you to be strategic with the buildings you try to go for and the powers you use on a turn. I find those styles of games interesting, and I’m glad Tumble Town seems to be in a similar vein. I’m not 100% sold on Main Street, yet, but let’s see how much that changes between now and fulfillment? I think, mechanically, it’s fine, but I’d love to see it become something really engaging. Not sure how to get there, but, it’s good to have dreams. Either way, I’ve enjoyed getting to spend a little time in Tumble Town, and if you’re a fan of dice, stacking, tableau-building, or just Western-themed games, you might be interested in checking this one out! I’ve certainly had fun with it.