Haven’t done a Kickstarter game in a couple weeks, so I might as well do another one of those. As with most Kickstarter games, I was drawn in by its art and theme (and reasonably low price — this is why you buy early, kids, the savings) and I stayed with it for its fun replay value.

In Lanterns: The Harvest Festival (“Lanterns”), you play as one of 2-4 people during the annual and completely unexpected Harvest Festival, in which you place lanterns on the lake to create beautiful patterns that will earn honor for your clan. This, undoubtedly, makes Lanterns one of the most descriptively titled games I own (save for Betrayal at House on the Hill), which is nice, I suppose.

Super simple setup. It changes slightly depending on player count, so pay attention. You should see the following: 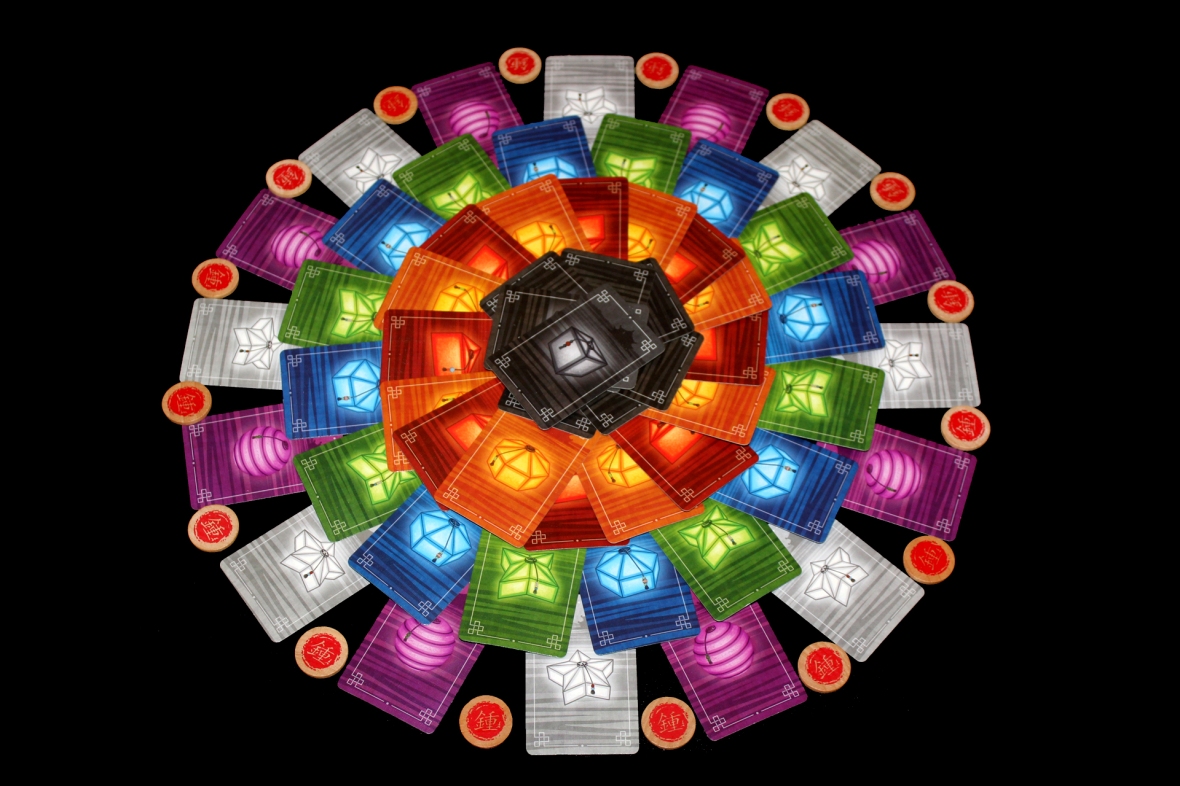 Maybe not in this configuration, though.

Lantern Cards. These are the primary currency of the game. Split them up into their respective colors and set them aside.

Favor tokens. These are used for exchanging, which I’ll explain later. Set these aside.

Dedication Tokens. These are worth points. Separate them by color and organize them in descending order (that’s most-on-top for you keeping score at home) and set them aside. You can keep the three generic (gray) 4 tokens aside as well; you probably won’t need them.

Lake Tiles! These are all very nice and have blue backs. I’d say set them aside, but you have to pick one out in particular first:

This is the starting tile. Place the tile such that the red lanterns are on the starting player’s side. This is crucial. You might see other Lake Tiles with pictures of dragons, koi, pandas, or etc. on them. They are Platform Tiles, which should be shuffled in with Lake Tiles and played normally. Now, shuffle the stack, deal each player 3 Lake Tiles, and put the remaining in a draw stack.

Cool! You’re almost done! Now, notice how the starting player is facing the red lantern side of the Lake tile? Give her a red lantern card.

Now here’s where things get interesting. You should give the remaining players a lantern corresponding to the color lantern they’re facing, but where does the second player sit in a 2-player game? Do they get white? Black? Who knows! Just pick one and roll with it. I’ll explain why in Gameplay.

So, Lanterns is very simple to play. Here’s why. 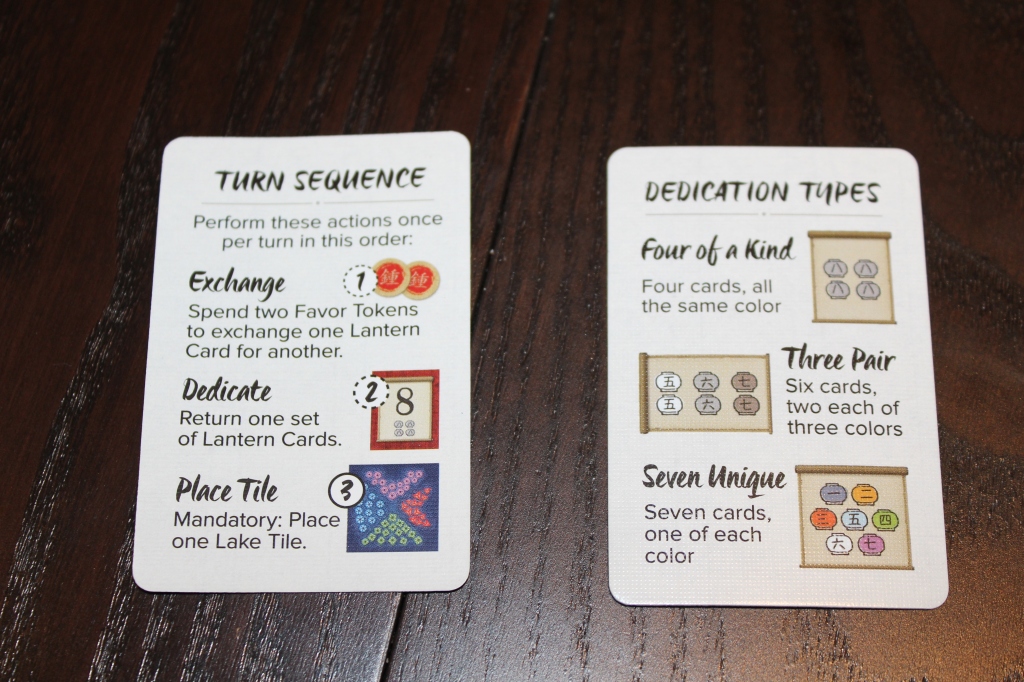 This is all you can do in Lanterns. You have two optional actions before every turn, and then you MUST place a Lake Tile if you can. Let’s recap really fast for people who find picture-reading beneath them:

You may perform each action once per turn, if possible. Once the Lake Tiles have been exhausted (including the players’ hands), each player gets one last turn where they may perform the optional actions.

So, let’s look at a special tile as an example. Here’s one of the Platform Tiles I mentioned earlier: 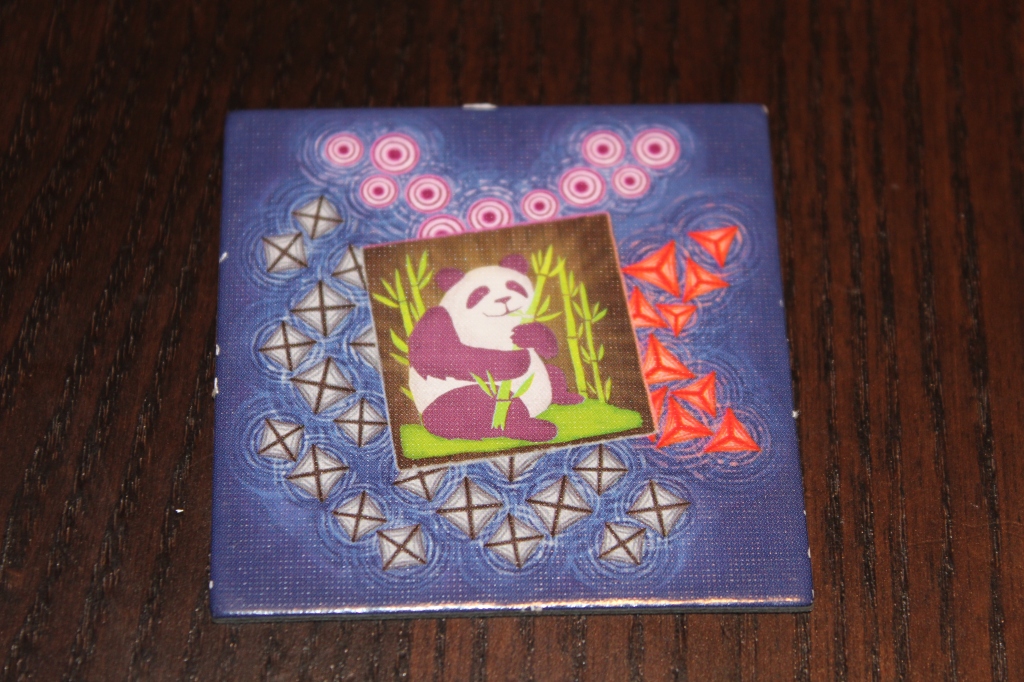 Adorable. But when it’s played, you can place it adjacent to any tile. Once that happens, the following events happen in sequence:

Note some things about this: 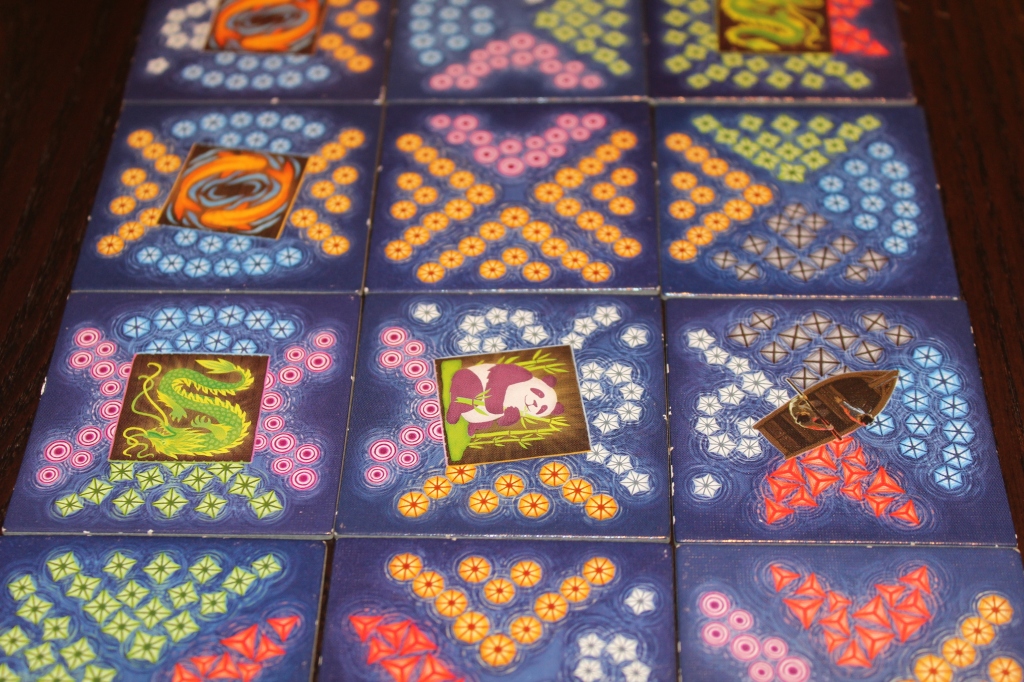 If you were to slide that Dragon Platform Tile in on your turn, it would match with the Koi Platform, the Panda Platform, and the Green Lantern on the Lake tile. This means you (assuming you are facing green, like the picture) would get the following:

Which is, all things considered, a pretty sweet deal. You got four Lantern Cards and three Favor Tokens!

Now, draw a Lake Tile from the stack (if there are any left) and continue with the next player’s turn. Continue until all the Lake Tiles have been played, and the player with the most points wins!

Not very hard, but has a fairly interesting strategy to it. Let’s talk about it.

Yeah, this game is pretty great. It’s got a really nice aesthetic, the set-collection gameplay is really well-woven into the theme, and overall I just think this is a pretty great game if you’ve got some downtime. I would really like to see an expansion, here, maybe adding in some fix for that whole “being stuck in last place” thing that I mentioned or adding in new types of tiles or platforms, but honestly right now I think it’s a pretty great game. Definitely worth the Kickstarter money (especially for an early arrival!) and definitely worth picking up, now.