So I was looking at the game on Amazon, and I apparently have an older version. Now I feel old. Sad.

Regardless, have you ever watched Snow White and the Seven Dwarfs and thought, “you know, I’m pretty sure that, grammatically, it’s ‘dwarves'”? If not, good, because apparently it’s actually supposed to be dwarfs unless you’re J.R.R. Tolkien. Who knew?

But more to the point, if you’ve ever dreamed of having their fictional life and mining all day for some reason, this is your game. In Saboteur, you play as a team of dwarfs digging tunnels underground in search of gold. However, as you might surmise from the name, you might not all want the same thing…

So, you’ll notice inside the box that you’ve got four decks of cards, each of a different size: 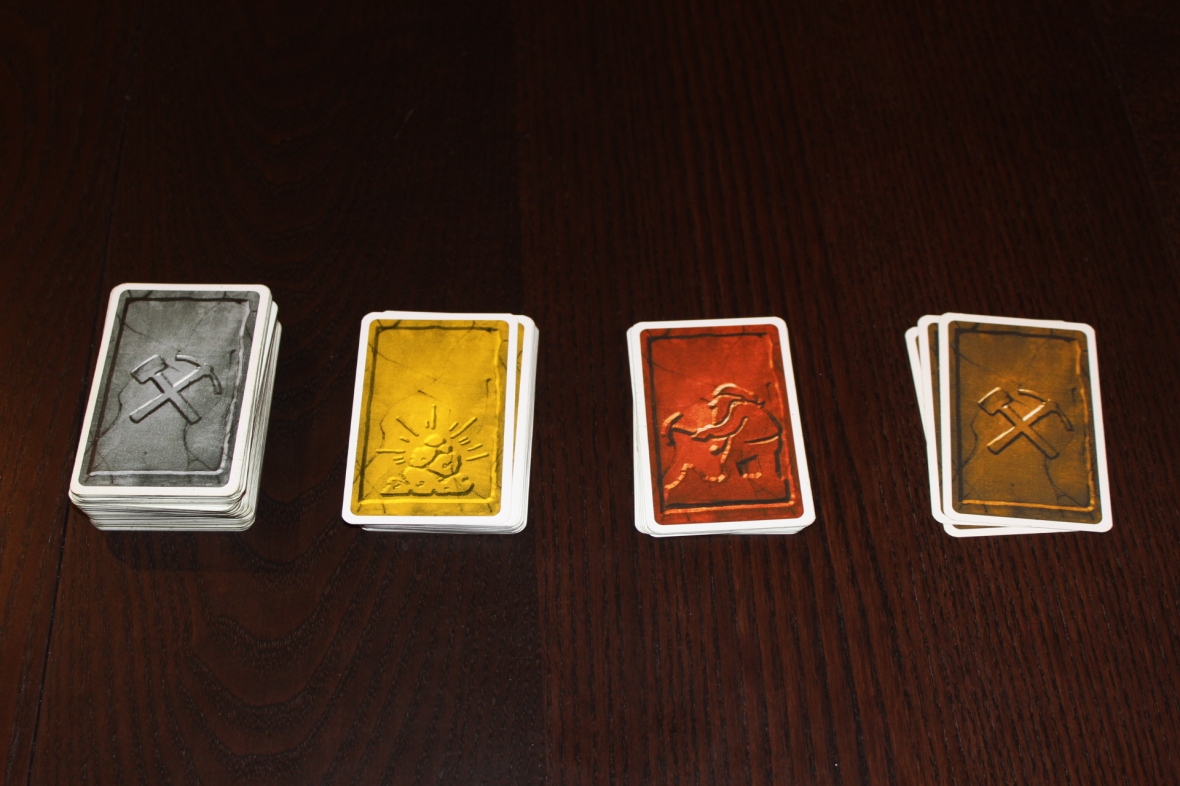 These are, from left to right:

And, very helpfully, I’ll explain them in right to left order because, well, it’s a bit more helpful thematically. However, I’ll start with a card that’s not pictured: 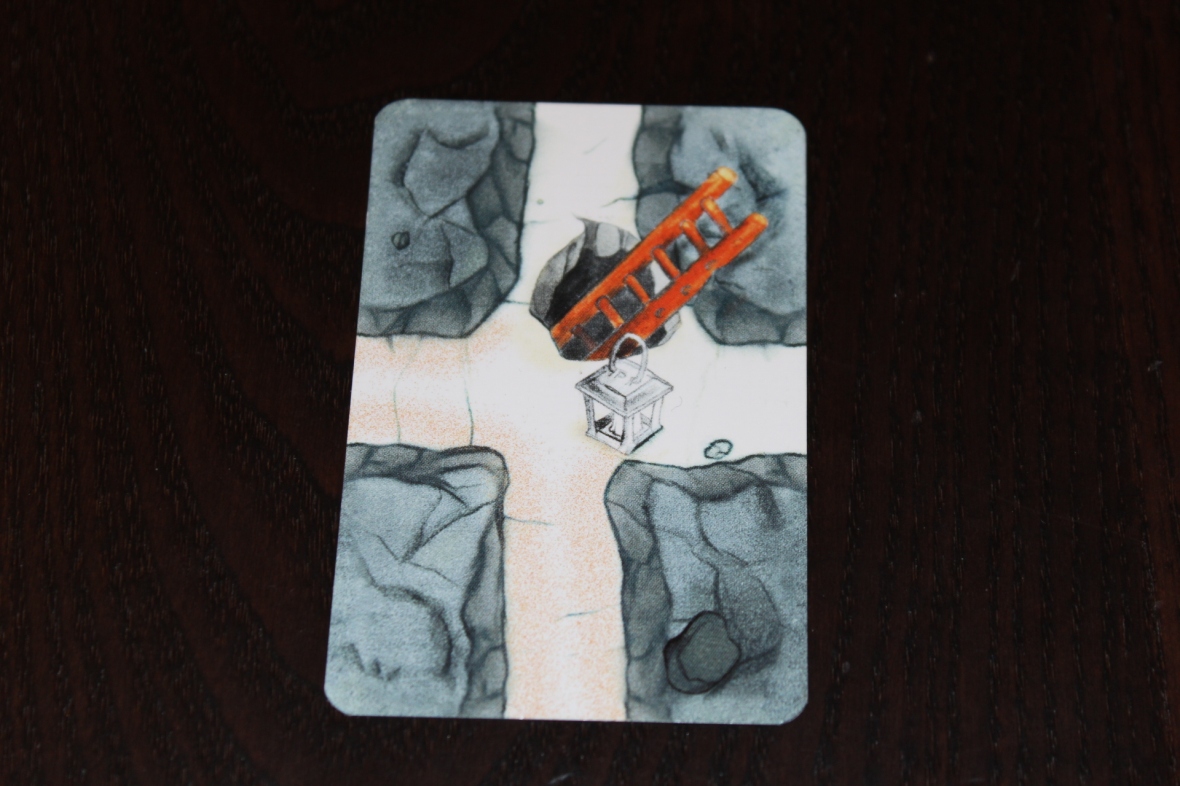 This card is the entrance to the mine! Thankfully, it’s double-sided, so it should be pretty easy to find. Set it aside for now — all the miners will “start” at that point in the mine. Don’t use the white-bordered side, as the path cards fairly seamlessly connect to each other.

So, as noble mining dwarfs we’re looking for gold (the card in the center) and we won’t stop until we find it or physically can’t continue digging. However, we’re not totally sure which card is gold or which is a rock (they’ve all got the same backs). Shuffle these and set them up exactly seven card widths from the start card (so seven cards should fit between the start and the goal), and then set them each spaced one card length apart (such that you’ve basically got a 7×5 rectangle between the start and the goal — I’ll show a picture later).

These are our roles in the game. Very similar to BANG! The Dice Game or Avalon, there are a couple teams. On the left are the dwarfs — for the most part, they work together and succeed as a group because they’re all buddies. On the right are the CLEARLY MALICIOUS saboteurs — they’re also on a team, but they figure that they can get all the gold for themselves if they can exhaust the mining team. Once they give up, the saboteurs come in and take the gold. Look how evil they look! Also, it clearly says “Saboteur” on the top of the card, so that should also be a helpful clue.

Note that there are different numbers for different player counts, like Avalon:

Also note that this means there’s always a variable number of saboteurs in every game (and there can be zero with low player counts!). Shuffle the dwarf cards and give one to each player, setting aside the unused one. Keep these hidden.

These are the reward! It’s very exciting. I’ll explain what happens with these during Gameplay, so for right now just understand that some cards are worth 1, 2, or 3 gold, and shuffle the deck and set it aside.

Now, deal everyone a certain number of path / action cards, depending on your player count:

I’ll explain what they do during Gameplay as well. If your setup looks like this, you’re ready to start playing (note the gaps between the goal cards): 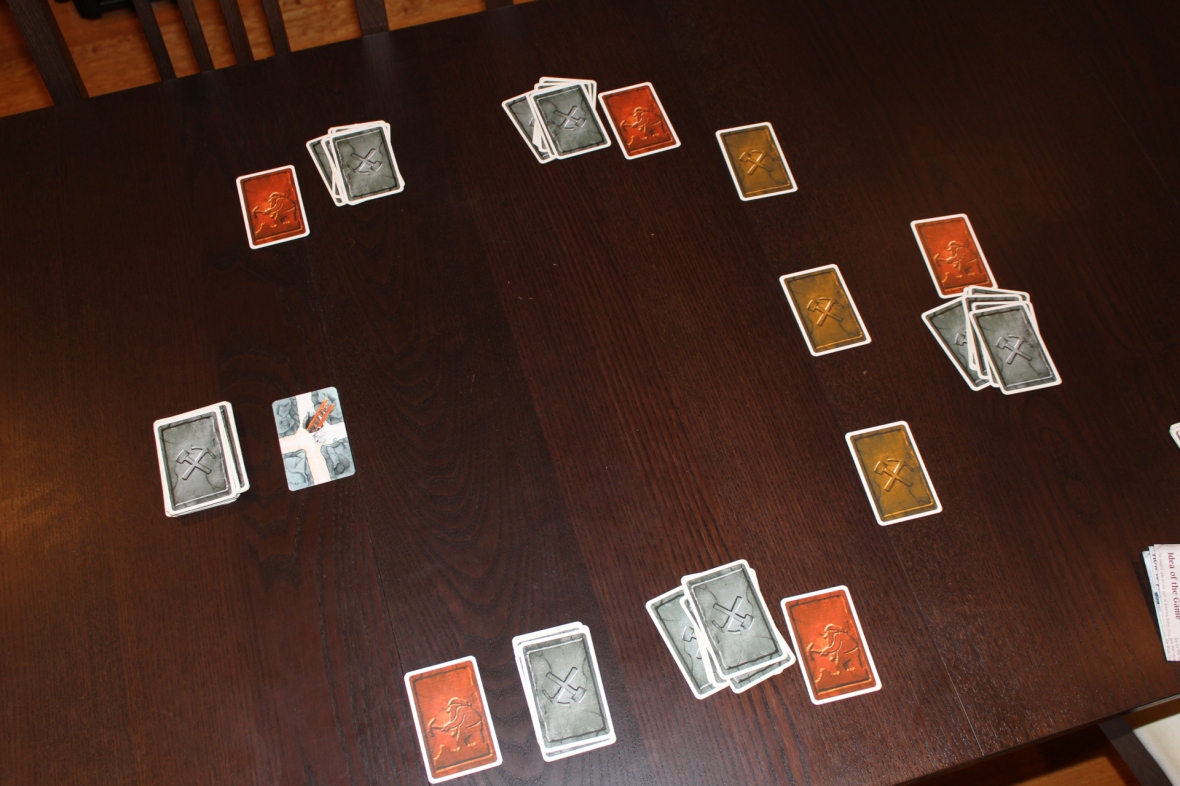 Helpfully, my table is set up so there are two lines that are the EXACT WIDTH that the board should be built in (from where you can add in leaves to expand the table). But enough about furniture; let’s talk Gameplay.

At its core, Saboteur is three rounds played with the following rule: If the dwarfs can build an unbroken path from the start card to the gold goal card, they win the round. Otherwise, the saboteurs win. Pretty simple, right? If the dwarfs win, they get money, otherwise the saboteurs get money. I’ll discuss this a bit more at the Round End … section.

So, on your turn, you can do one of two things: Play a path / action card, or discard a card from your hand face-down to the discard pile. Either way, you draw a new card, and then it’s the next player’s turn. In order to make an informed decision, we should probably discuss what path / action cards are.

There’s a lot going on here, so let’s go one at a time.

These here are your standard path cards. There are all sorts of paths in all sorts of directions, so you should expect to see many of these. The most helpful ones are usually the four-way paths (the middle card), since they give you a lot of options.

However, for every good card, there’s usually a bad one:

If you were a villainous saboteur, this card would probably be pretty useful to you…

Note there are some rules for playing path cards:

Now, each dwarf starts with an implied lamp, mine cart, and pickaxe (they’re all standard issue, as per some collective bargaining agreement, I imagine). However, a nefarious dwarf or saboteur could, potentially, play one of these cards: 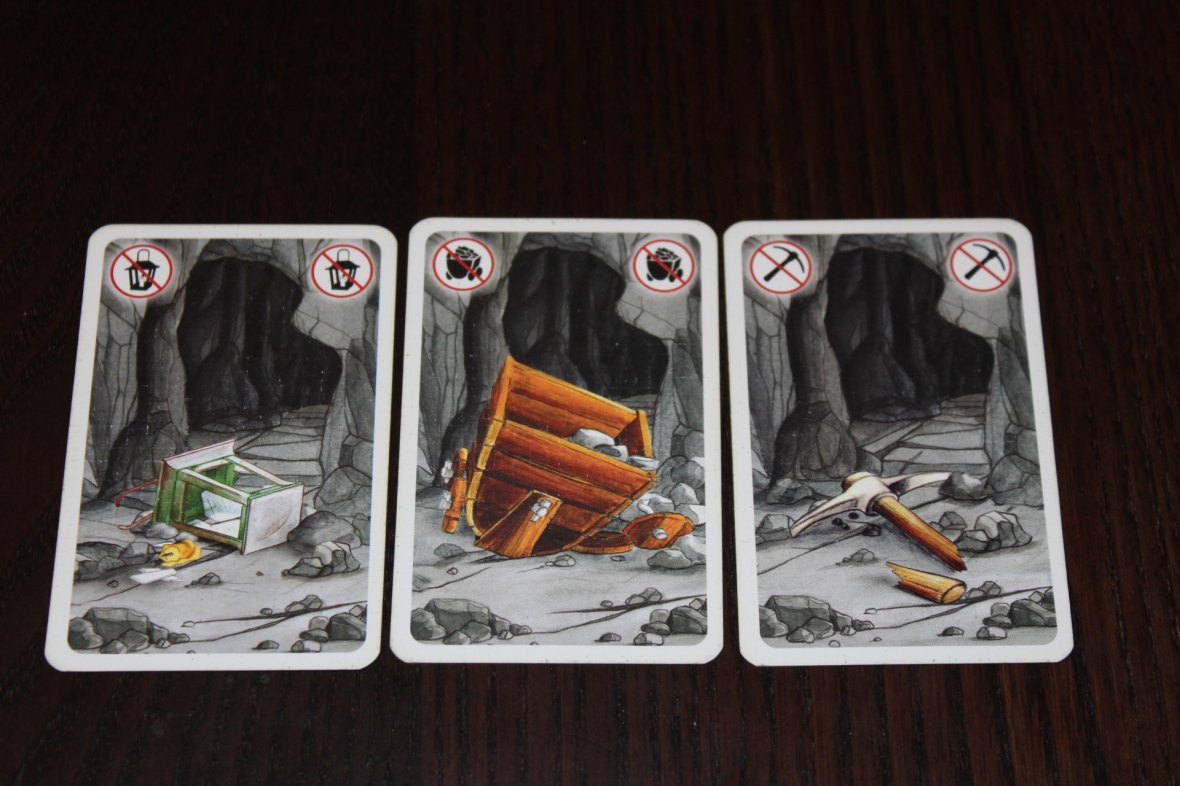 These cards destroy one of your trusty tools, rendering you incapable of playing additional path cards. This may be good if your saboteur keeps playing dead ends and you want to slow their roll, or if you’re a saboteur worried that a dwarf will finish the path to the gold. Note that you can still play action cards when any or all of your tools are broken. Also note that you can have all three tools broken, but never more than one of the same tool broken. It makes sense — two broken pickaxes are every bit as useless as one broken pickaxe, so no real loss. Also, who carries a backup pickaxe?

Now, as you might surmise, if you can break tools you can always repair them:

And other dwarfs / saboteurs can play repair cards on your broken tools, too. It’s pretty handy to be on a team! There are also hybrid repair cards, which let you repair either (but not both) of a certain type of damaged tool:

There are only three of these (these three, specifically), so spend wisely.

Finally, there are two more types of action cards:

Rock-fall cards demolish one path card currently played. This is a great way to get rid of a pesky dead-end, or a pesky four-way path card (depending on your team). These are pretty powerful, so don’t take them for granted! 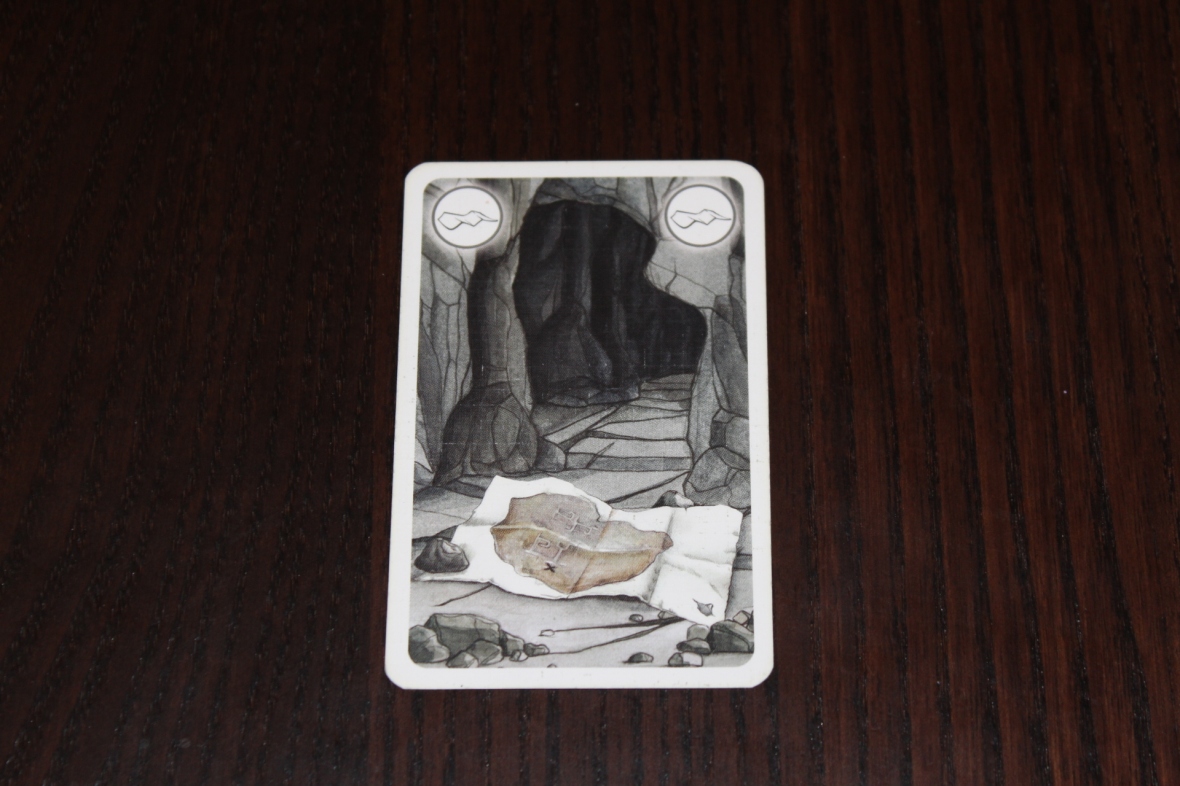 These map cards let you (and only you) look at one of the goal cards face-down at the end of your play area. You can (and should!) then report back to your group, telling them what you found. Note that you don’t necessarily have to be honest about what you found. If you feel like it’s not important that they know you found gold, you can tell them “yeah, this card is a rock.” However, your group might suspect that you’re a saboteur if they find out the truth…

Anyways, that’s the basics. You know what team you’re on, so you know what you need to do. Once the dwarfs either find the gold or give up, the round ends.

Once the round ends, if the saboteurs won distribute gold nuggets as follows:

Note if a saboteur gets to the gold card for some unknowable reason, they do not get any gold. Why would you even do that.

In the other case, draw as many gold nugget cards as there are players, and starting with the player who got to the gold goal card, give each dwarf one. Yes, this likely means that some players will get more gold nugget cards than other players. That should just be an incentive to be first. Also, yes, you might get three gold nugget cards with 1 nugget and your co-dwarf might get two that each have 3 (for 6 total to your 3). That sucks, but that’s why you keep your gold secret.

There is an amazing optional rule, as well — dwarf players with broken equipment get no gold when the dwarfs win. I wouldn’t recommend it for your first game, but it’s fun as hell. Note that Saboteurs still get gold even if their tools are broken.

So this is a bit of an odd game, so it might have some variable strategy. I’m going to state upfront that your mileage may vary on some of these tips:

You know, I had to go back and recalibrate a couple of my reviews after doing this (Tides of Time, Dragon Slayer, a couple of the Lost Legacy packs, and Tokaido), but I think this is fair. I occasionally turn this down, but in general I think Saboteur is a pretty fun game. I like that it’s a bluffing / deduction game with a construction element (obviously), but I also find it highly accessible.

I think I just wish it were easier to win when you’re a saboteur. Maybe I’m just bad at it.