There are strange things going on in your basement laboratories. They keep calling up for more barrels of quicksilver, or bits of your hair. Well it’s all in the name of progress. They’re looking for a way to turn lead into gold, or at least into something better than lead. That lead had just been too good of a bargain to pass up, you didn’t think, where will I put all this lead, what am I going to do with this lead anyway. Well that will all be sorted out. They’re also looking for a universal solvent. If they manage that one, you will take whatever they use to hold it in and build a castle out of it. A castle that can’t be dissolved. Now that’s progress.

I said I’d get around to this eventually, and here we are. Just Adventures, Empires, and the Update Packs left to go before we’re all out of Dominion (or until the inevitable Seaside Second Edition or something infuriating).

Anyways. Dominion Alchemy is one of the earlier Dominion expansions, and generally seen as one of the more polarizing, so I wanted to wait until I had played it a bit more (and reviewed more Dominion, to be honest) before I wrote up my thoughts. Fittingly, some see it as lead — dead weight that burdens your deck and slows your game down, and others see it as gold — highly-powerful Action cards that can accelerate an engine or crush your opponents. Which one will it be for you?

As with all the Dominions, let’s see what Alchemy adds, card-wise:

Before you set aside the base cards, it’s worth nothing that Alchemy adds a new one: Potions, a type of Treasure that specifically generates a Potion rather than money: 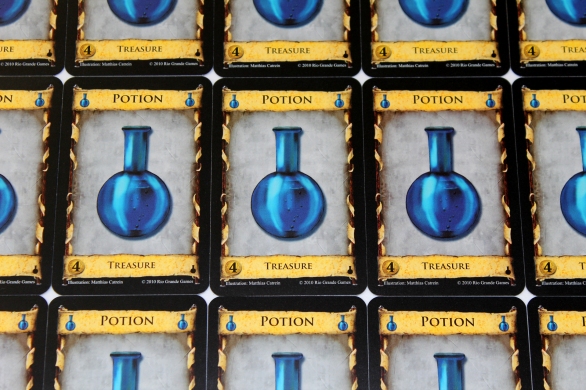 Anyways, set aside the base cards (Copper, Silver, Gold, Potion, Estate, Duchy, Province, Curse), and then set them up:

Set these 10 up to form the Supply:

Now, as always (well, excluding Dark Ages), give each player three Estates and seven Coppers. Have them shuffle those ten cards and draw five for their initial hand. Once your play area looks like this, you’re ready to start:

If you don’t know what a deckbuilder is, please see my Dominion or Dominion: Intrigue reviews for a brief (for me, at least) explanation. Alchemy is a small expansion that adds new things, yes, like that Potion, but it’s much smaller and less earth-shattering than, say, Dark Ages, especially since no new cards currently use Potions (probably due to the mixed response).

Consistent across every iteration of Dominion, your turn has two phases: the Action Phase and the Buy Phase. During the Action Phase, you can play one Action card. During the Buy Phase, you can reveal and play Treasure Cards and then buy one card from the Supply (the Kingdom cards + Treasure cards + Victory cards + Curses, if you really feel like that’s the best move [for this set, it might be better to just buy Coppers?]), provided you can pay its cost (bottom-left number).

All cards have a title (top), a cost (bottom-left), and their type or types (bottom-center), but their effects are different, otherwise the game would probably be fairly dry. Generally, Action cards will have some effects (in addition to extra text, if necessary):

If you have no +Action cards, you only get to play one Action card before your Action Phase ends. Action cards that lack a +Action are generally referred to as terminal Actions, and you generally will see a reasonable number of those in every set (and there are some in Alchemy, yes).

After the Action Phase comes your Buy Phase, in which you play Treasure cards to accumulate money, and then spend that money on cards from the Supply. Treasure cards can be Potion (value … Potion?), Copper (value 1), Silver (value 2), or Gold (value 3), and you should also count +Coins you got during the Action Phase. Unless you got +Buys in the Action Phase, you can only buy one card. If you want to buy a card with a Potion in the cost but have no Potion Treasures in play, you cannot buy it, as you might guess.

Now, the Clean-Up Phase. As mentioned previously, discard every card (actions, treasures, etc.) in front of you from play and discard any cards left in your hand, and then the next player takes their turn and so on / so forth until the game ends. That said, I tend to leave out Possession, if played, so nobody forgets (since it lets you take your opponent’s next turn as a bonus turn for you). But how does the game end?

Note that the second case includes Coppers, Silvers, Golds, Potions, Curses, Duchies, and Estates, as well as the normal Kingdom cards. Now, count how many Victory points you have among your cards, and whoever has the most points wins!

Alchemy doesn’t have any particular cards (except for Familiar, since it gives Curses) that will hurt with higher player counts, but generally the cards involve things like counting the cards in your deck or searching your deck or revealing four cards or chaining actions, so I’d say this set is more likely than your average expansion to really slow the game down with more players, especially if they’re slower. I just played a three-player game against myself and it still took longer than usual. Be warned — I’d play this with two, but I’d probably shy away from an Alchemy-heavy game with four people, especially if Golem or Philosopher’s Stone are in play. More on that in Pros, Mehs, and Cons.

This is always the hardest part for me to write. There are just so many cards! Please assume this is a non-exhaustive list of strategies, and check the DominionStrategy wiki for more.

Overall, I think it’s a fine expansion. I bumped it up from a 6 because there are times I like having a card or two from Alchemy in my other Dominion games, but generally they have Potion costs so I try to avoid them. It’s kind of a bummer that Alchemy gets the short end of the stick, but I understand why — it has a lot of cards with a weird cost that never gets used in subsequent sets and the cards themselves tend to slow down the game, making it a bit less fun for me (since I prefer shorter games to longer instances of the same game). If it were up to me, I’d probably just play some other expansion, but I don’t think this is a bad one. I think I’d probably like it more if a later expansion brought back Potions — it would give me a reason to play it more as well as give me more opportunities to see how those cards synergize with other sets. As it stands, though, while it’s definitely not a bad expansion, the added slowness to the game definitely doesn’t make me want to play it in particular.