Full disclosure: A preview copy of Oceans was provided by North Star Games. Some art, gameplay, or other aspects of the game may change between this preview and the fulfillment of the Kickstarter, should it fund, as this is a preview of a currently unreleased game.

Sequel games are always an interesting business, aren’t they? On one hand, they invite comparison to the original, but on the other, you want it to be a distinct enough entity that both games can thrive in the marketplace. It’s why for video games you’ll see significant plot changes (generally speaking) or things like that, or some board games will integrate with their predecessors (like ICECOOL2) or significantly change a mechanic (Paperback / Hardback). The risk you run with edging too similar is that you might not appeal to people who already have the original game or you might make that original game obsolete. Either way, Oceans is a brand-new game in the Evolution card game system set inside the vast seas, so let’s dive right in.

In Oceans, you’re trying to raise up species throughout time by equipping them with traits that will keep them best suited for long-term survival. Be careful, though; your opponents are developing sleeker bodies and sharper teeth, and they may have other plans for your populations. And then there’s The Deep, where creatures beyond your imagination lurk. What will emerge from the water, and what will survive? Only one way to find out!

Setup isn’t too bad. Set out your boards: 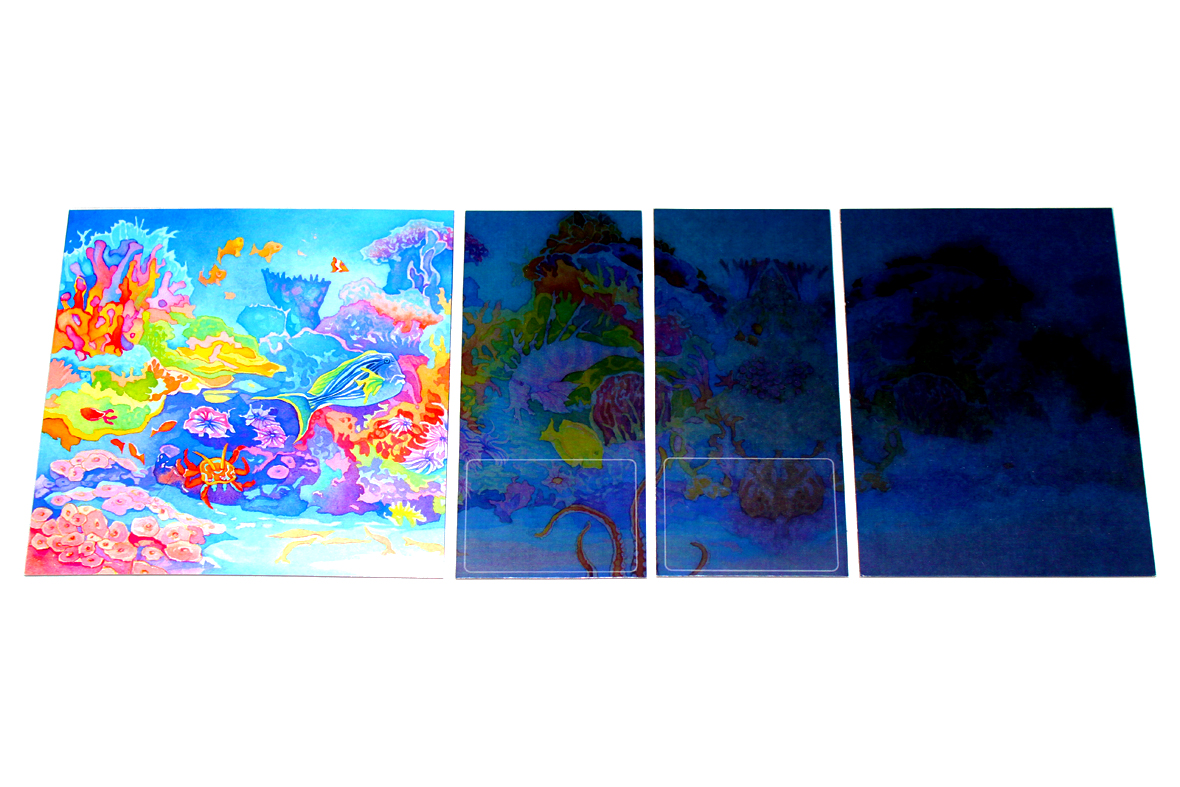 The right three (darker ones) are the Ocean Boards. The leftmost one is the Reef Board. I’ll refer to them as such. Now, take the fish:

You’ll want to take certain colors ( / numbers, depending on your color perception) and set them in a pile:

Mix them up properly. You’ll notice I didn’t refer to the Aqua fish (which look pretty similar to the Light Blue, unfortunately; hopefully they change the colors a bit more for release). Set those on the far right of the rightmost Ocean Board; they’ll comprise the Reserve. In the final version there will be walls so they don’t spill everywhere. Also note that they’ve already changed these colors in the latest edition of the rules, so focus on the numbers instead. Previews!

For the others, split them into three approximately equal piles and put each pile on an Ocean Board; don’t put any on the Reef. Now, put a Scenario card on each of the two smaller Ocean Boards:

More on those later. Shuffle the Surface Cards and deal each player 7:

Now, flip the top card of that deck over and start a discard pile. There’s a number on the bottom-left; move that many fish times the number of players from the left ocean board to the Reef.

Shuffle the Deep Cards and reveal 3 to the right of the Ocean Boards; this is known as the Gene Pool:

Finally, give each player a score bag. None came in my preview copy, so I’m using the ones from Evolution: CLIMATE for this game. Once you’ve got all that, you should be ready to start! 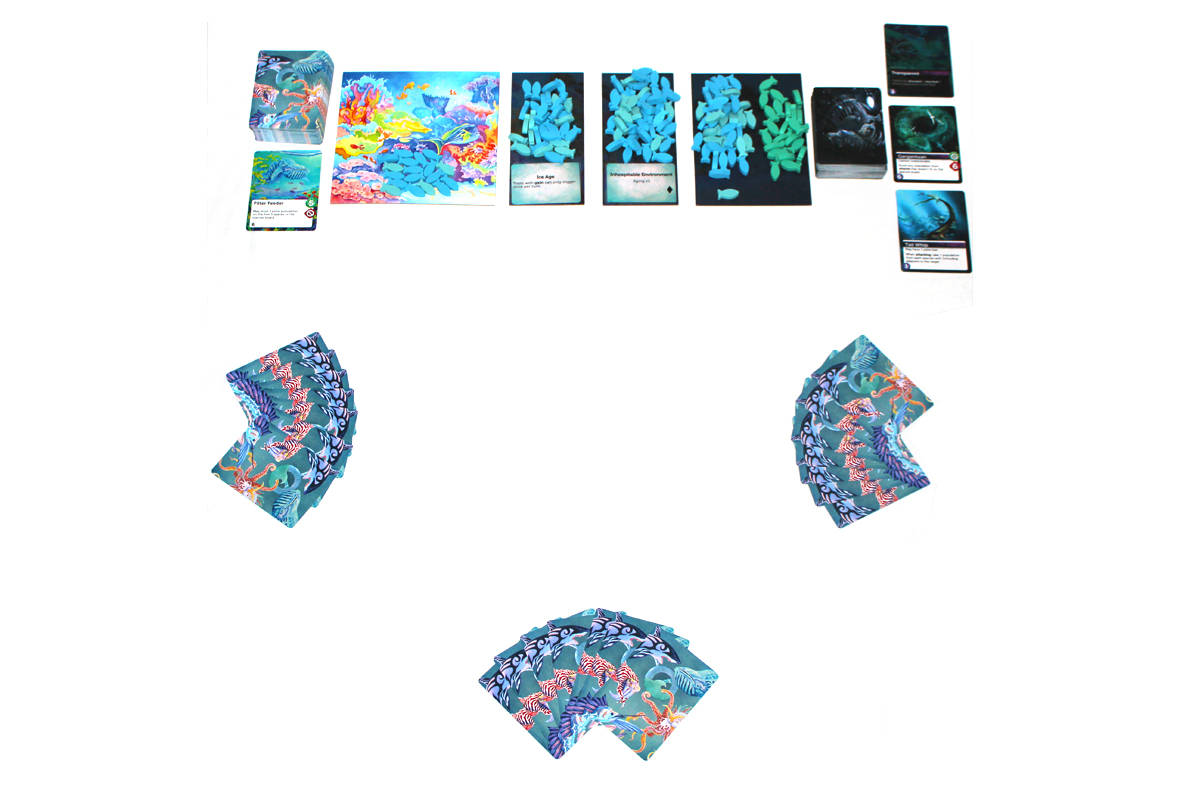 So, as I mentioned, you want to build up great species that can survive (and thrive, if you’re lucky) in the big open ocean. As you do, you’ll increase your population, which will be worth points at the end of the game. Naturally, the player who earns the most points wins.

On your turn, you’ll do five things: 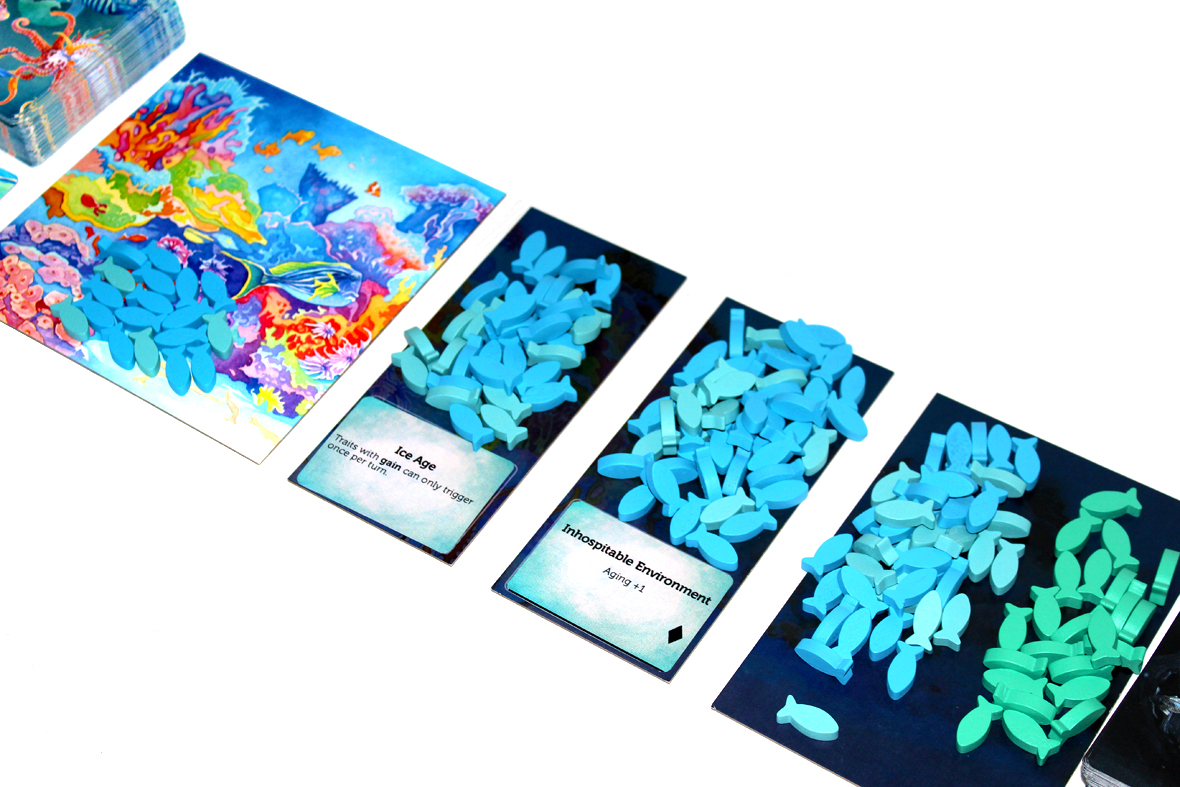 At the beginning of the game, you get one Play Cards action, and you can use that to Evolve or Migrate. You may also remove any number of traits from your existing species for free. If you remove a Surface Card, discard it; if you remove a Deep Card, return it to the box.

This also allows you to play Deep cards. Some of these cards are Events; pay the cost at the appropriate time (indicated on the card) and then remove the card from the game.

Now to eat, the most important part of both life and this game. Choose one species to take a Feeding Action; they may either Forage or Attack.

No matter what, you must always take as much food as you can; your only limits are available spaces on your Species Board, various card effects, and food tokens available from your Feeding source. Even if you wanted to take less food (perhaps to avoid overpopulation?), you could not.

If you have no Forage / Attack value (all species start at 0), any Forage or Attack action you take will allow you to take 1 population (before card effects are calculated, of course).

To Forage, add up all the green icons on a species and take that number of tokens from the Reef. Place them onto your Species Board. If the Reef is empty, you may not Forage, as you are not allowed to Forage unless you can gain at least 1 population.

To Attack, add up all the red icons on a species and choose another species to attack. You may target your own (the ocean is cruel that way). Remove population tokens equal to your attack value from their Species Board (if there are fewer, remove what you can) and add them to your Species Board. Like Foraging, you must be able to take at least 1 population in order to attack.

Other species may have Gain actions, which are reactive by nature. These are usually activated by other cards effects or actions (such as Shark Cleaner, which gains population when a nearby species attacks). Gains work differently than foraging; they take from the leftmost available pile that isn’t empty (ignoring the Reef entirely).

Finally, some species eat a bit too much; if that happens, they Overpopulate. You’ll know this has occurred when you cover the bones space on your Species Board (meaning the non-bones spaces are also filled). This can happen even if it’s not your turn (thanks, Gains!). Once you’ve resolved the action that caused you to Overpopulate, place population from your species into the Reef until it has 5 remaining on its Species Board. If this happened during your Feeding Phase, that species may not feed again this turn.

Aging is surprisingly straightforward. Move 1 population from each of your species and place it in your score bag. If it has no population to remove, do nothing for it.

Extinction is also surprisingly straightforward; at this point in your turn, any of your species with 0 population go extinct. Discard its Surface Trait Cards; return the Deep Trait Cards to the box. Place the Species Board back in the supply.

The important thing to remember is that this only affects your species on your turn; if another player attacks your species and reduces their population to 0, you can still try to save it during your next Feeding Phase.

Now, you have the opportunity to draw some Deep Cards. As mentioned earlier, they can only be used after the Cambrian Explosion, but they’re all unique and very powerful in the right context. You may do one of two things:

Now, discard as many Surface Cards as you want and draw until you have 7 total cards in hand. Your turn has ended.

One thing that might happen during any phase is that a Scenario Card may activate. For the two center Ocean Boards, if they are ever depleted, their corresponding Scenario becomes active until an action puts fish back onto their Ocean Board. Some are Events, which activate every time the board is depleted; others are ongoing effects, which are in effect as long as their boards are empty. When the first scenario card is activated, the Cambrian Explosion occurs. 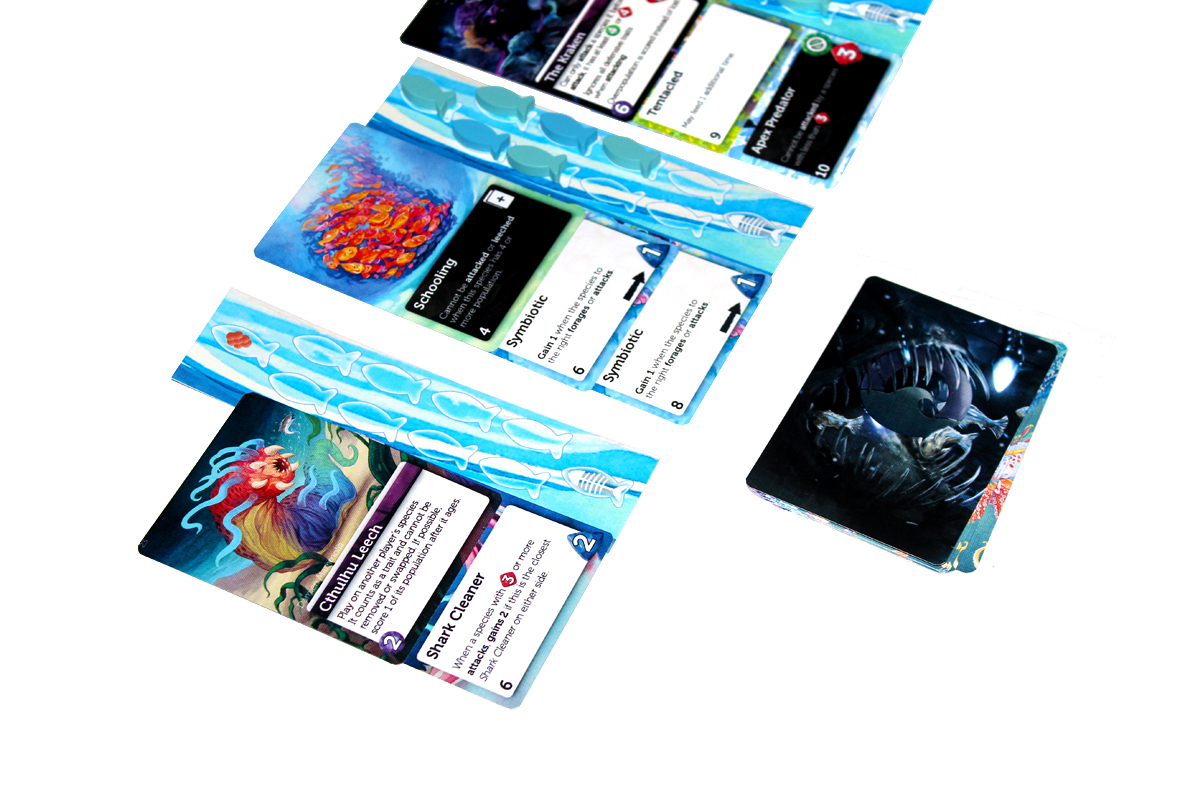 Once someone dips into the Reserve via a Gain, the end game occurs. The current player completes their turn, and then each player gains a bonus population for each of their surviving species directly into their score bag.

After you’ve scored your surviving species, take all population tokens on their Species Boards and add them to your Score Bag. 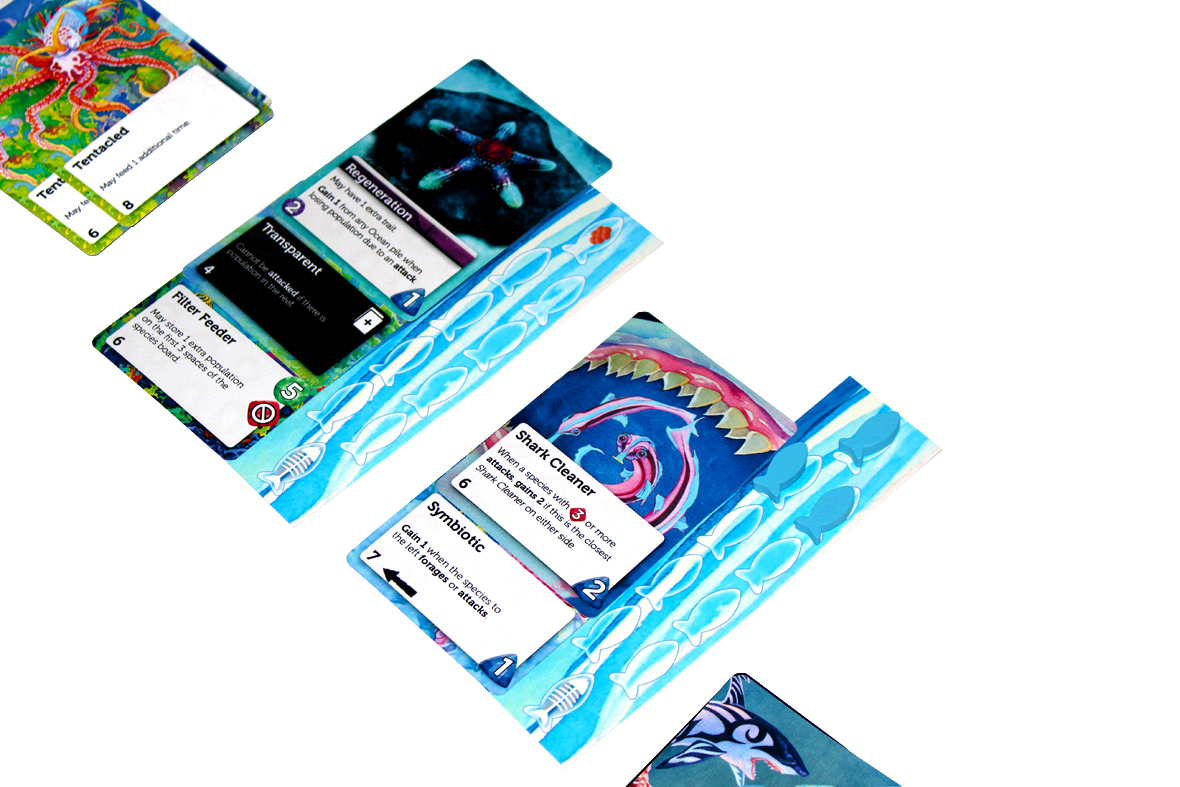 Whew, the major thing you’re going to see is that the game is going to take longer with higher player counts. Evolution’s major issue remains that you kind of need to know what’s going on in other players’ tableaus (because you can affect them), so players need to do a lot of reading. Add in 50 unique cards in the Deep and now you’ve got more cards that everyone should have a basic idea of prior to their turn and it’ll slow down a fair bit. It’s already a bit long when you’re learning how to play at two or three players; I suspect a six-player game could be looking at upwards of two hours, and I’m not about that life. Plus, the chaos increases at higher player counts, and the delicate ecosystem maintenance might not be there in a way that stops players from ganging up on each other (especially since the scores are roughly hidden). At lower player counts, I feel you have a bit more control, so that’s generally where I prefer to keep my plays, all things considered. 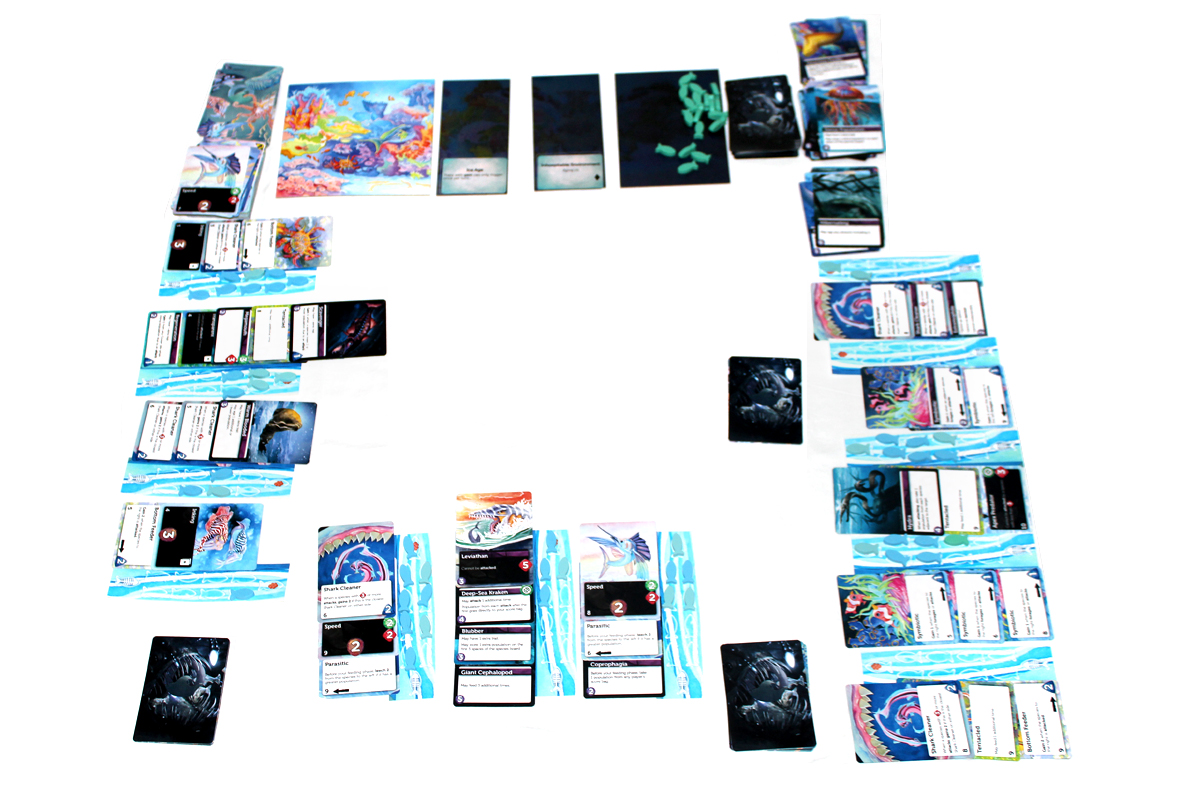 Overall, I’m still pretty excited about Oceans! Like I said, some parts of the game feel a bit clunky, yes, but I’m super excited about another game in the Evolution series and this one doesn’t disappoint; it just takes some getting used to. These are always kind of interestingly tough reviews to write; there are a lot of things I’m really excited about, like new combinations of cards or the new game system, but there are also things that I’m not as enthused about, like the fairly lengthy playtime or the seemingly increased focus on combat and take-that predation. Thankfully, for instance, if someone attacks you, you can get most of your population back by attacking them the next turn, if you can, so there are multiple different ways to solve the issues that I have. If you’re a fan of the series, though, there’s a lot to look forward to! I particularly like the idea of the scenario cards being toggleable; you can turn them off or on when you want to, especially if it’ll help you or hurt your opponents. I am, for the purposes of this review, assuming a few of the rougher edges will be smoothed out by the time it hits retail. Either way, though, I’m definitely looking forward to playing it again. If you’re a long-time fan of Evolution, this is a similar game with some wildly new approaches that are quite interesting, and if you’re new to the series it’s not a bad place to dive right into, if you’re okay with a game that can potentially run a bit longer. I’ve had a lot of fun with Oceans, and for fans of engine-building with a predator / prey spin, I’d recommend checking it out!