Full disclosure: A review copy of Here Comes the Dog was provided by itten.

I’ve really been excited about getting the opportunity to review all of itten’s games ahead of Gen Con; it’s cool for me because I get to check out a bunch of games that I’ve always wanted to try their set of titles, and for the most part writing up the reviews has been a blast (except for Yeti in the House, which I’m still not totally sure how to play / review; maybe I can work on that). We’ve still got a few left to check out, so let’s hit up Hatsuden after this but spend some time with Here Comes the Dog.

In Here Comes the Dog, you play as humans at the dawn of the Age of Domestication, where you first come in contact with your imminent friends. However, they’re not currently friendly, so you have a massive fire roaring to keep them at bay while you work to give enough of these dogs meat so that you can eventually domesticate and breed them into poodles. As one does. You feel pretty secure in your decision to do so, but the fire has definitely seen better days, which is worrisome. Will you be able to amass some dogs for your own purposes, or will you find out what happens when the fire goes out?

As with the other itten titles I’ve covered already, there are two modes: Basic, and Dancing Villager; I’ll cover both.

To set this up, first add the bonfire to the center of the play area:

You’ll also want to lay the sticks on the center, so that they’ve all got one end touching the base of the bonfire. This is important: the order does not matter, so do whatever you want:

The sticks are Meat, Fire, and Charcoal. Useful to remember. You can set the color dice nearby, as well:

Now, give each player 3 villagers, standing up: 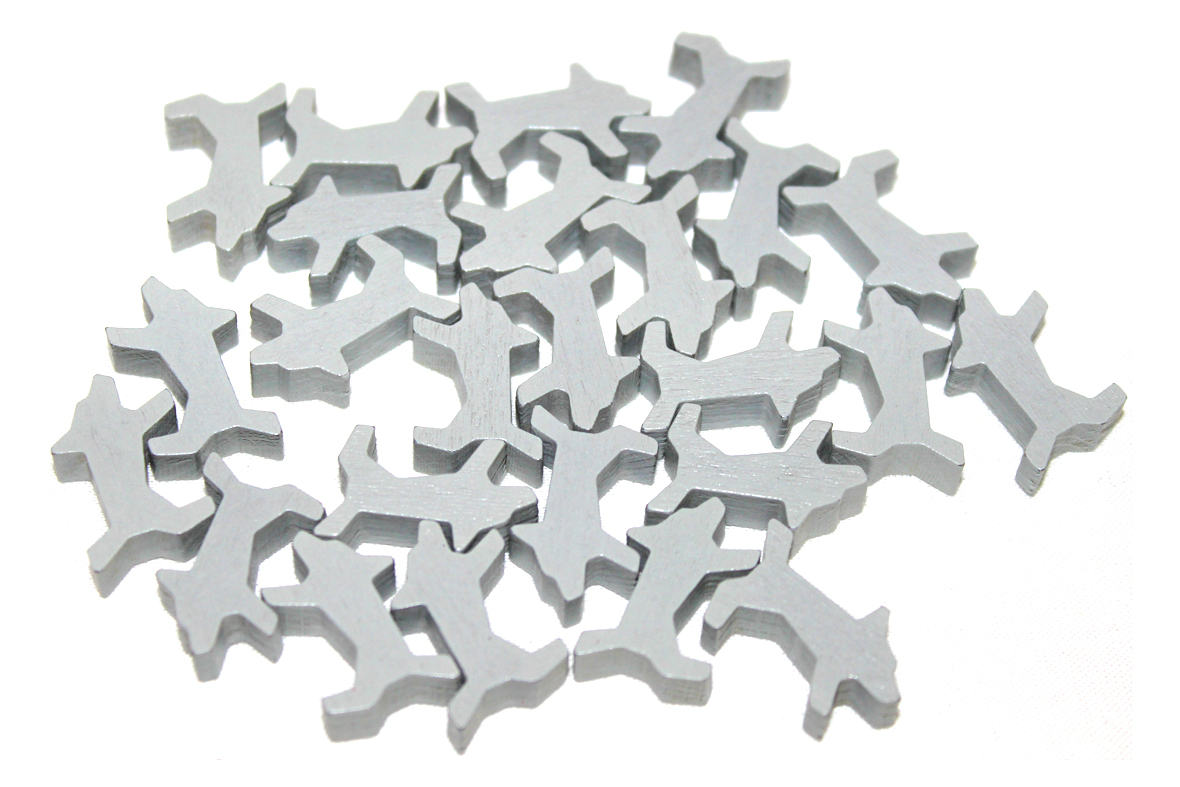 Place the Round Counter with 1 on top:

And you’re all ready to start!

Similar to the base game, set up the bonfire, but only put 3 Charcoal and 5 Meat on it. Each player then takes Villagers:

Place one of the dogs between the Bonfire and the player who is “going first”. It’s a real-time game, so, that’s an odd concept. Just use Cwazi or randomly choose a player or pick the youngest player.

The remaining dogs can be set aside as “the pack”. 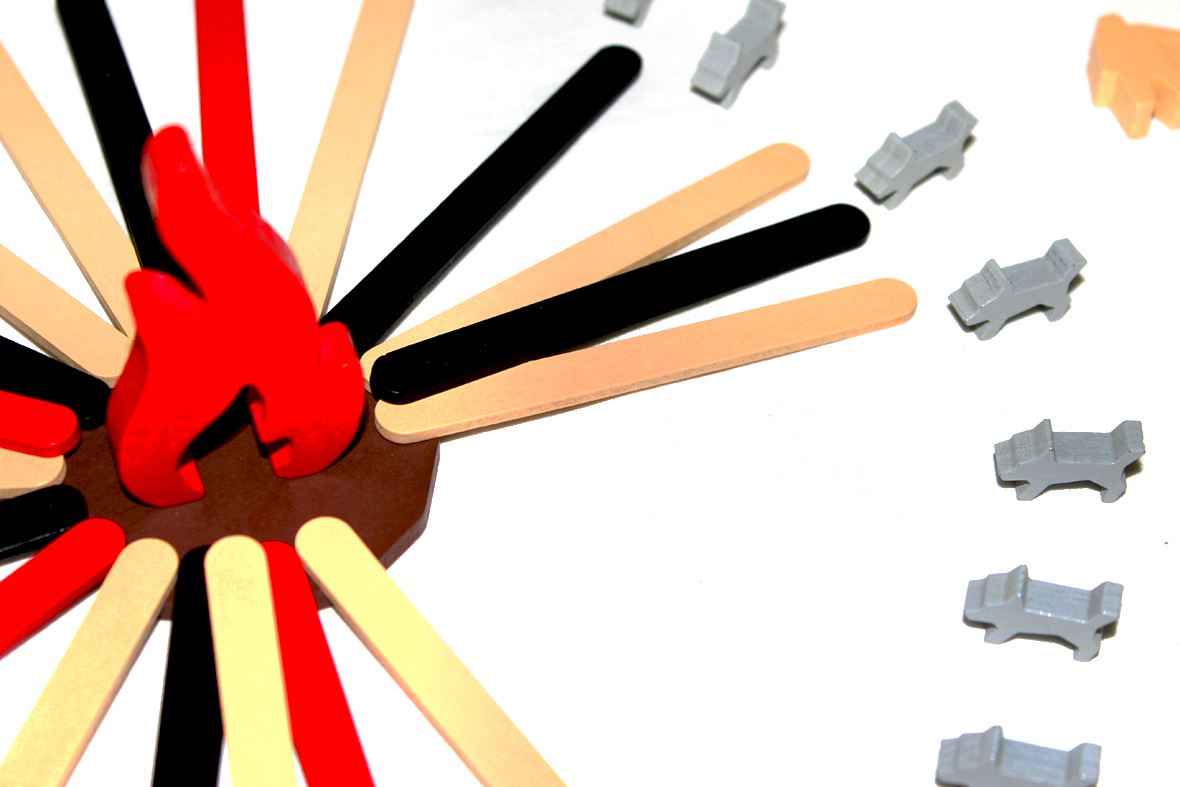 The game is played over five rounds as you, villagers at the dawn of time, attempt to domesticate dogs. However, they’re … still kind of wild, so if the fire burns out, you might have more trouble than you bargained for.

On your turn, you may roll or exchange. If you choose to roll, chuck the dice and take two sticks of your choice that match the dice colors. There are some special configurations:

Instead of rolling, you may choose to exchange a stick for one or more sticks, following these rules:

A round ends when all of the Charcoal and / or Meat sticks have been taken. When that happens, an Event occurs:

The game ends after five rounds or when all other players are eliminated. Whoever has tamed the most dogs wins!

If you thought the last game was weird, just wait. Everyone simultaneously says “Here Comes the Dog!” and then rolls the villagers, like dice. Depending on how you roll, you do certain actions:

You’re going to be doing this pretty quickly, so now remove sticks from the bonfire equivalent to your roll. There’s one catch: Hand-up and Hand-down villagers cancel each other out.

If a villager lands on top of another one perfectly (as in, it’s not touching the table), the total number of sticks you remove doubles.

If a villager lands standing up, awesome! You get to tame a dog immediately.

If all the villagers were rolled flat (there can be no standing, hand-up, or hand-down villagers), you add one more dog to the village, behind the dog that’s already there. 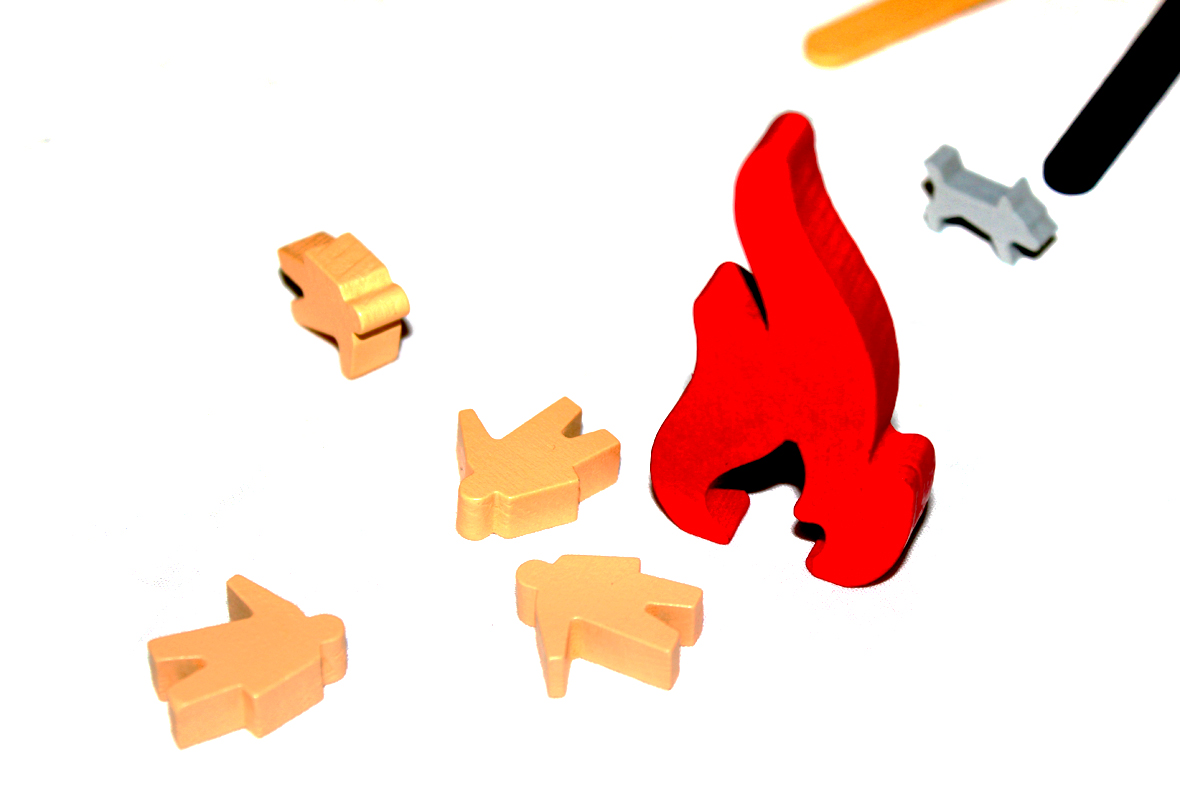 Now the tough part. If you figure that some number of sticks are going to run out before they’re all removed, you have to move fast:

If you take something when you shouldn’t have, you lose one Villager. If you run out of Villagers, return all your dogs to the pack and start back up to the regular number of Villagers.

If one of the events occurs, reset the bonfire. If a player tamed the lead dog from the previous round, set a new dog between them and the bonfire.

Once any player has tamed 7 dogs, they win! If there’s a tie, break it in favor of the player with the most Villagers.

Not all that many, for either game. I suppose in the Basic Game, it’s worth playing more conservatively at higher player counts, since you get fewer turns and it’s more likely that your opponents will be able to team up on you. You don’t want to take so much meat that every other player takes charcoal to try and mess you up real bad. In Dancing Villager, it’s pretty much the same game no matter the player count, you just have fewer of your own villagers that you can watch at any given juncture, so you have to play a bit quicker. I enjoy the lower player count end of the Basic Game and pretty much any player count for Dancing Villager, basically.

Overall, I think Here Comes the Dog is interesting and fun! I think it shakes out favorably that there are more things I like than things I don’t, but I’ll freely admit that this is a game I don’t really see myself playing all the time. It’s a bit long for a filler, but a bit too random to be a meaty game that I want to play when I’m feeling something that’s a bit closer to standard weight. That’s an unfortunate spot to occupy, but, I think it’s doing its best, so I’ll still likely play it from time to time. It’s got a lot going for it! Great pieces, incredibly silly gameplay, and some very bright and bold colors make it another attractive game in itten’s line (which, again, they generally always make attractive games, so this isn’t a huge surprise). I think it’s the right spot for wanting to play something silly and not really caring how long it takes; you can very easily grab a snack or a drink and just kinda let the game happen for a bit and that’s fine. If you’re playing with hardcore strategics, this isn’t going to be the game for them, as it’s incredibly random and mostly revolves around rolling stuff that should or should not be rolled and whatever happens, happens. If you’re looking for some silly way to pass some time between games, though, Here Comes the Dog may be just what you need! I think it’s pretty entertaining.