Full disclosure: A preview copy of this game was provided by Appauling Games. As this is a preview, I will mostly keep my comments limited to gameplay. That said, please note that final artwork and rules may change, as this is a preview of a currently unreleased game.

If you’re anything like me, then you’ve accidentally realized that you’ve committed a heinous act and left your nail clippers in your carry-on luggage and worried that you’re going to get tackled by an Air Marshal.

Or maybe that is just me. Who knows.

Anyways, Nothing To Declare is an imminent Kickstarter game with some tongue-in-cheek idea of that tension, tasking players to disguise themselves as various “stereotypical” passengers (more on that later) in a series of attempts to sneak valuable luggage onto a plane while avoiding inspections. Will you be able to get that chainsaw through security, or will you end up with literally nothing to declare?

So there are two types of cards, blue Passenger cards and orange Baggage cards: 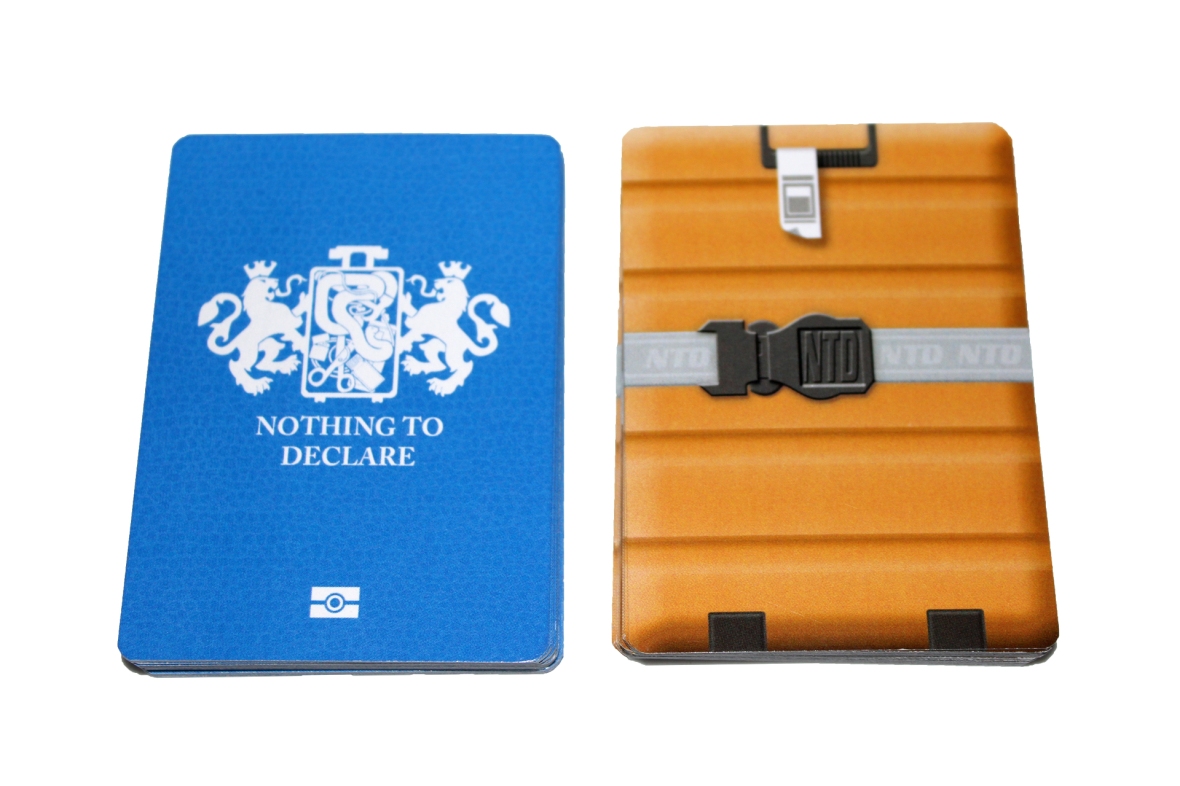 So, search through the deck and give each player a 1-, 2-, and 3-value Baggage card. They should shuffle them and “conceal” them, or play them face-down in a row in front of them. They’ll likely end up with a second row of cards, so I generally err towards two rows of three, as you’ll see in later photos. Note that once you’ve placed your baggage, you cannot shuffle it around, but you can always look at your own cards. Shuffle the remaining Baggage cards and place them in a pile in the center. Now, give each player one of these three Passenger cards: 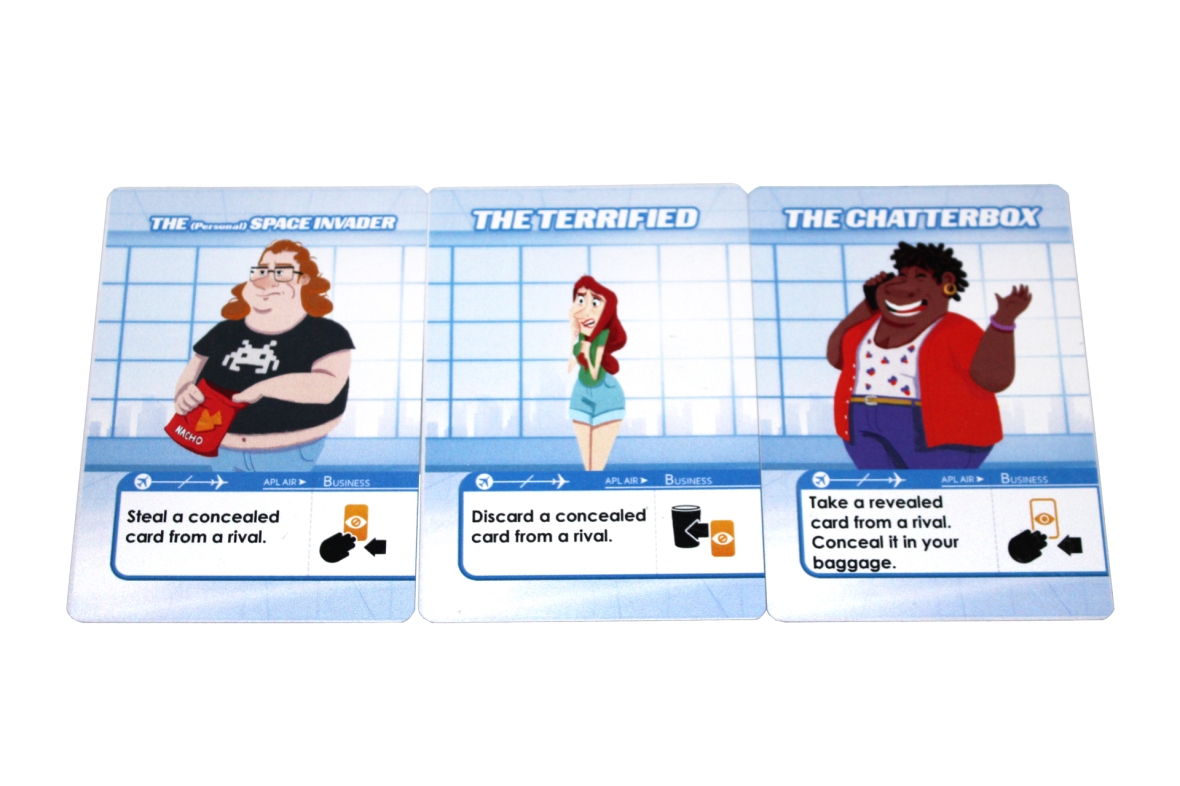 You’ll then shuffle the remaining Passenger cards and deal each player two more random cards for a total of 5.

Once your game looks like this, you’re all ready to take off: 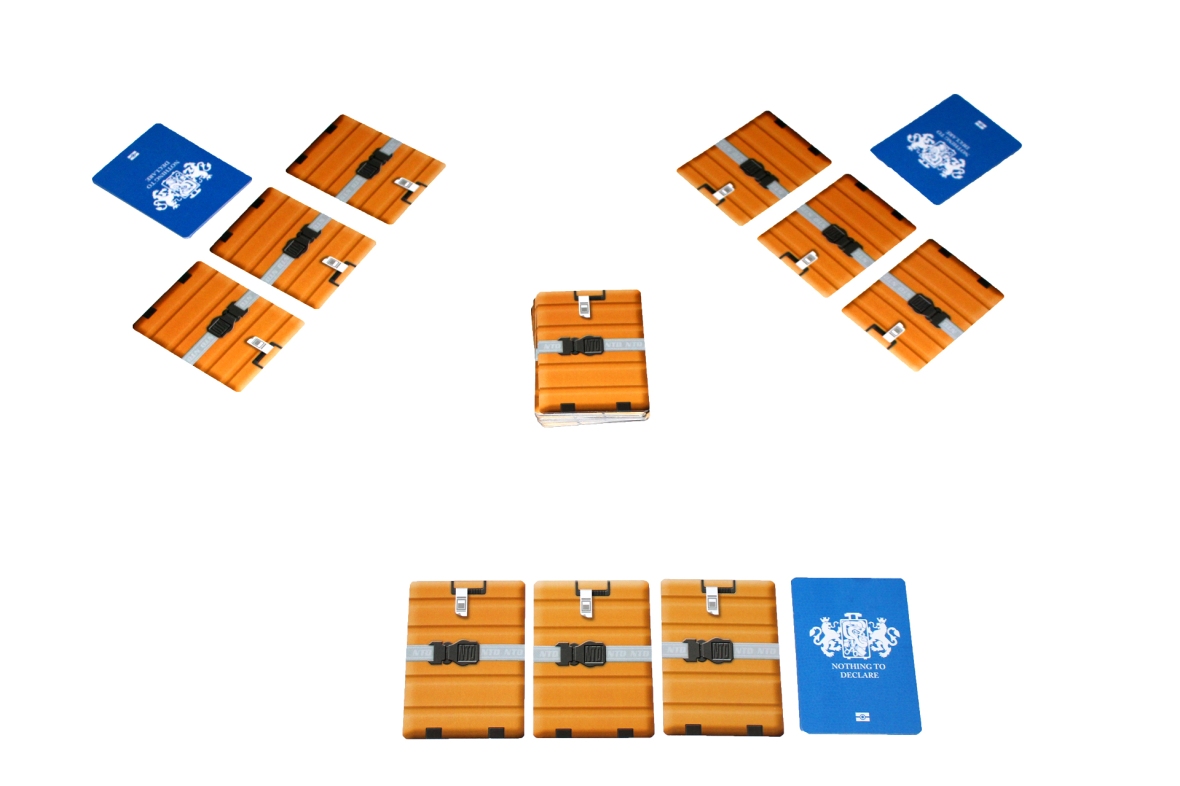 Gameplay is pretty straightforward. On every turn you must perform these three actions, in order:

There are a variety of Passenger cards: 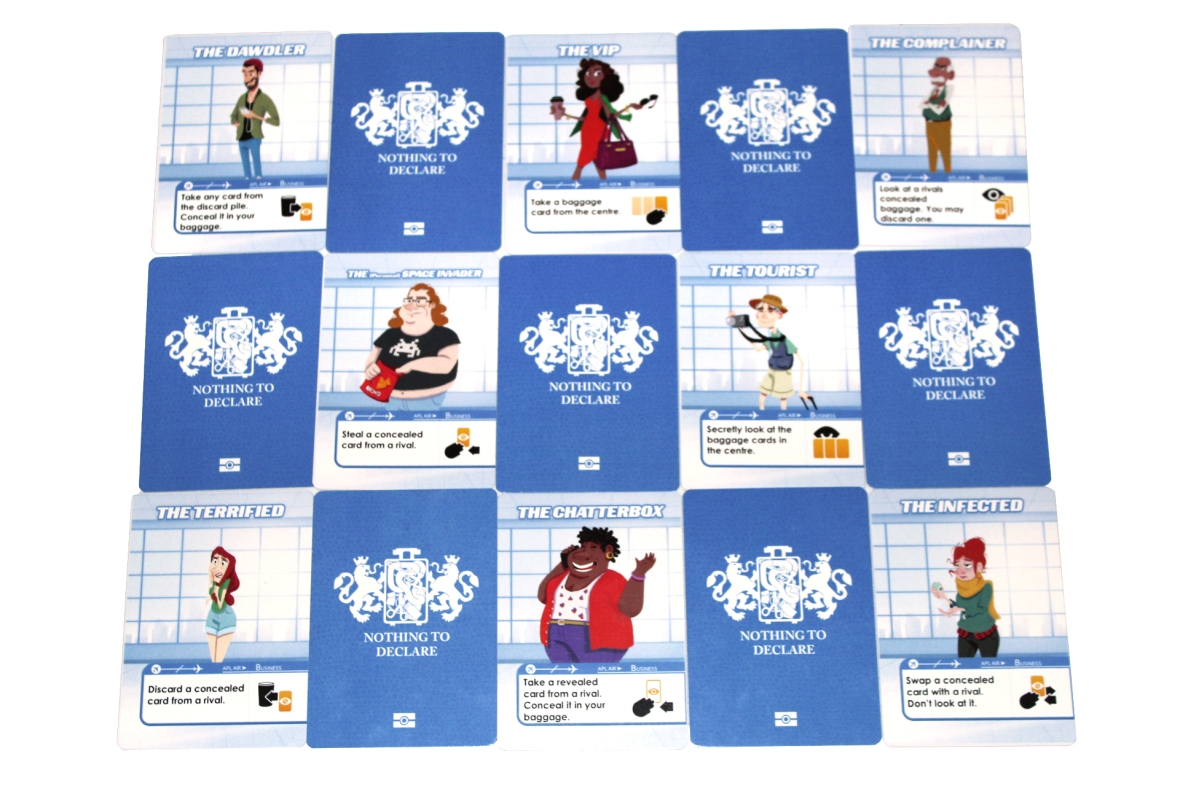 So you might have very different effects available than your opponent. There are also various values of Baggage cards, so what you get is fairly random: 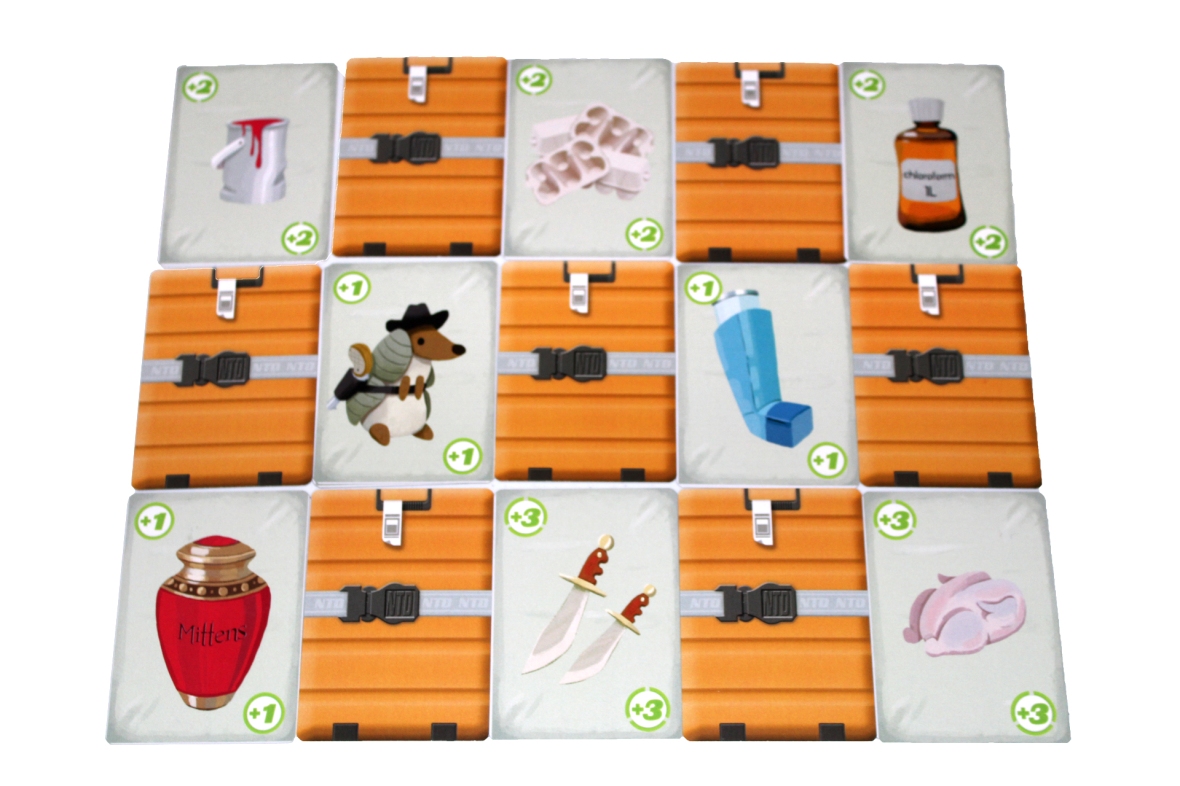 That said, if you draw one of these Inspection cards (they’re hidden in the Baggage card deck as normal bags! So sneaky), things get a little hectic: 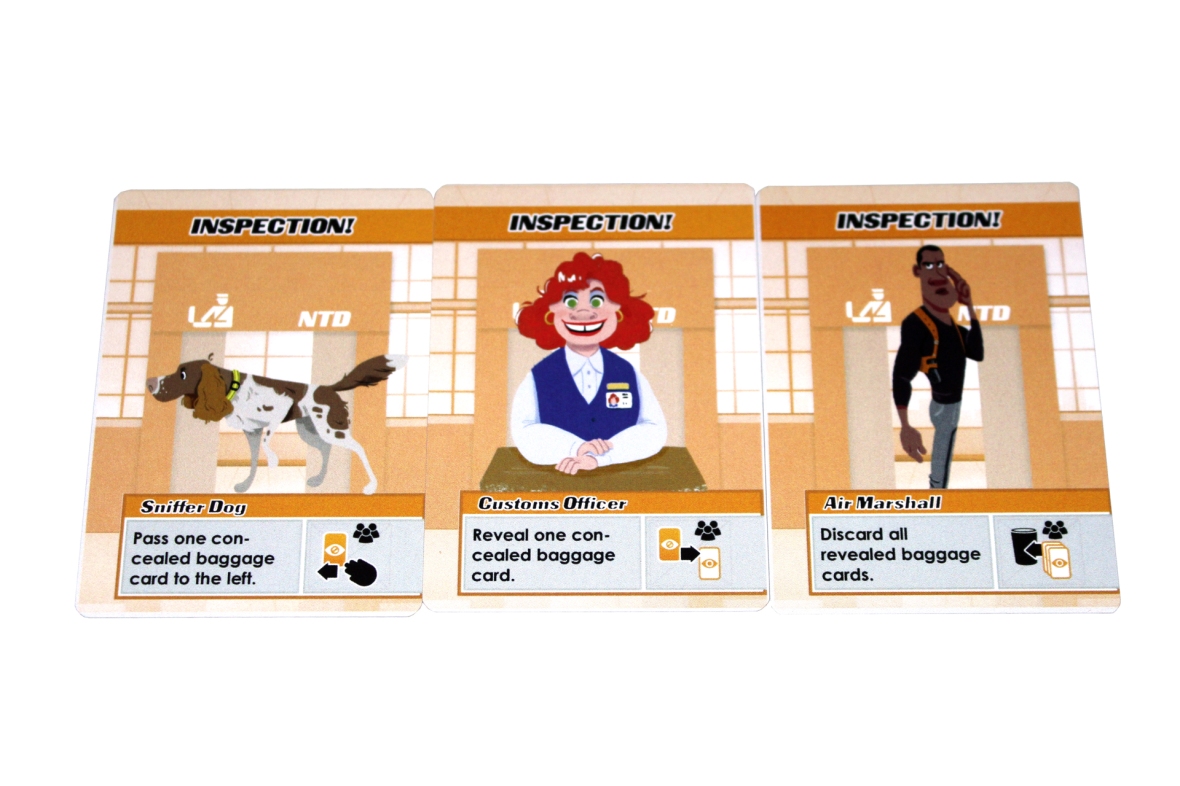 That effect activates immediately for all players and then the Inspection card is discarded (and you do not get another Baggage card! Tough break).

Play continues until every player is out of Passenger cards. Once that happens, discard all revealed cards and count the value of your concealed Baggage cards. The player with the most points wins!

So I’m actually more of a fan of this game (and most take-that games) at two players since it limits the potential for ganging-up. My frustration with a lot of direct conflict games like that is that you might just get dumped on by every player and then you have literally zero chance of success (even if that’s not their best move). At two, I feel like you pretty well know what your opponent has. So while it might come down to luck (and it generally does), you have a pretty reasonable task to remember their cards and yours.

At three+ players, I feel like the game generally becomes “pick on the person who you think is in the lead”, which means you might get hit a bunch in one round. It’s not that that isn’t the case at two players, it just feels a bit less frustrating since you have attempts to counter one person a bit more evenly.

Strategy’s a bit of a tough one here since it’s pretty luck-based, but I’ll see what I can come up with. 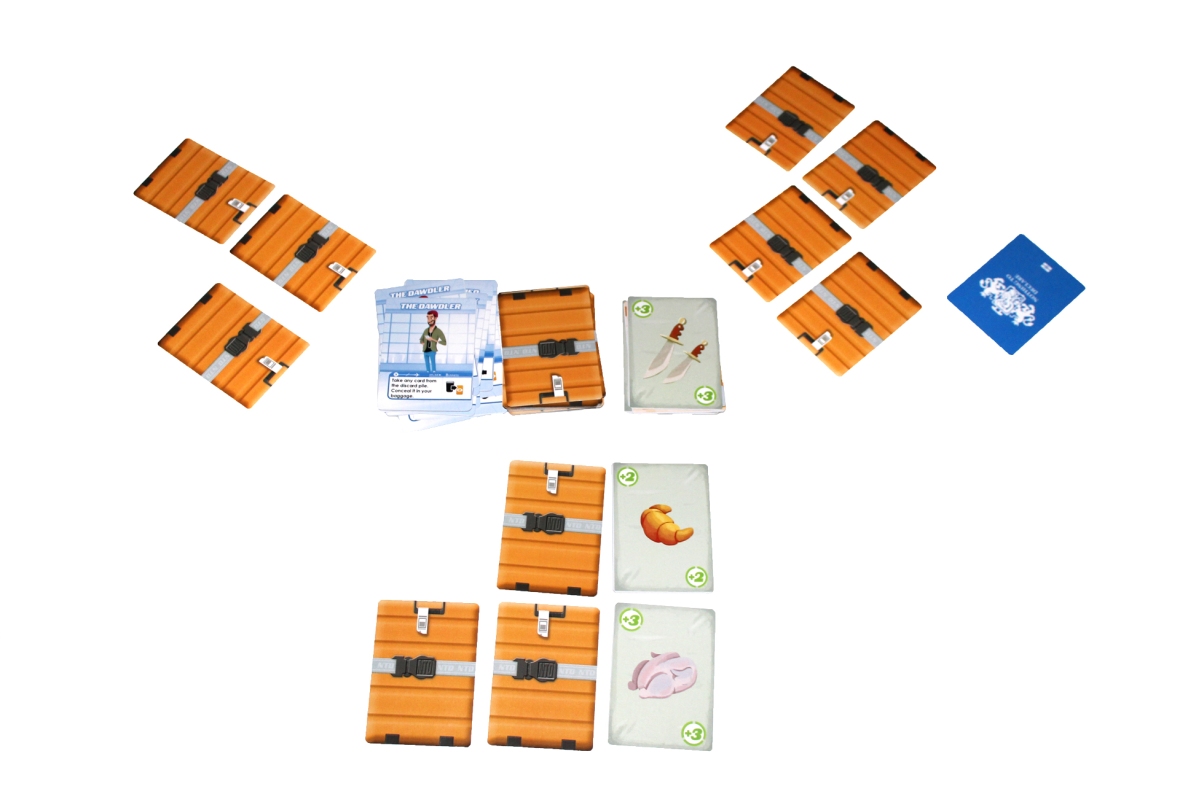 Overall, it kind of depends. I mentioned a few things I liked, but there are a few cons on my list as well. All those considered, I think that it might be better targeted as a family game, since the take-that would likely come off a bit smoother (as it does in Wolf & Hound where I’m too distracted by cute sheep to care about pretty much anything). Unfortunately, I haven’t played (and won’t likely ever have a chance to play) this with children, so I’m just going to go with my scores and speculate they’d be slightly higher if I were playing with families (similar to the bump I gave Wolf & Hound). I think, for me, I prefer it at two players, so I’ll also factor that in:

So, what I will say is that I’ve played it with several different groups and there are some high points, but also a number of things things that make the game less appealing to me. As I’ve mentioned in my About page, my ratings aren’t “how good is this game”, but rather “how likely am I to play this game again”. If there are things you think I’ve overlooked or missed, please let me know in the comments! I’d love to hear what you think about the game / retry it with suggestions or variants. Additionally, if you’re looking for more thoughts on the game, I’d recommend taking a look at Kickin’ It With Meg‘s review or Bearded Meeple. My final thought would be that if you are looking for a game to play with the whole family or if you enjoy take-that a lot, this might be a game worth checking out.